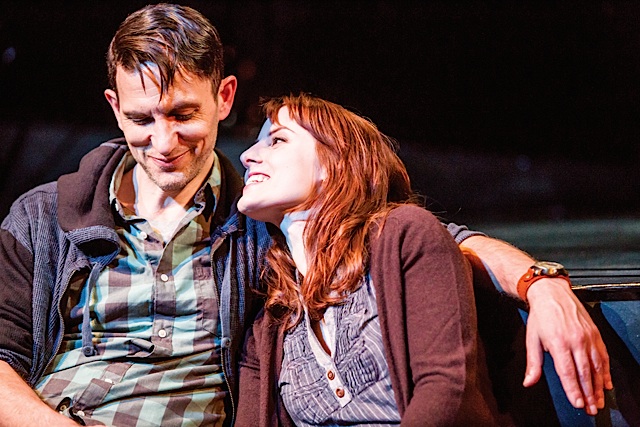 Jungle Theater has mounted an intoxicating area premiere of Nick Payne’s metaphysical drama, Constellations, directed with sensitivity by Gary Gisselman. Anna Sundberg and Ron Menzel portray a couple in love. Marianne is a quantum physics academic. Roland is a beekeeper. Various phases of this unlikely pair’s relationship are played with a conceit where, once played, they are replayed with slight dialogue variations and with different interpretations.

Payne’s is an effort to manifest the idea that reality exists on several planes at the same time. Some may feel it is more like an acting class exercise. That said, the chemistry between the two is luscious. Sundberg and Menzel continue to be two of the Twin Cities’ most watchable actors. Kate Sutton-Johnson’s starry set and C. Andrew Mayer’s evocative soundscape enhance the metaphysical intentions nicely. 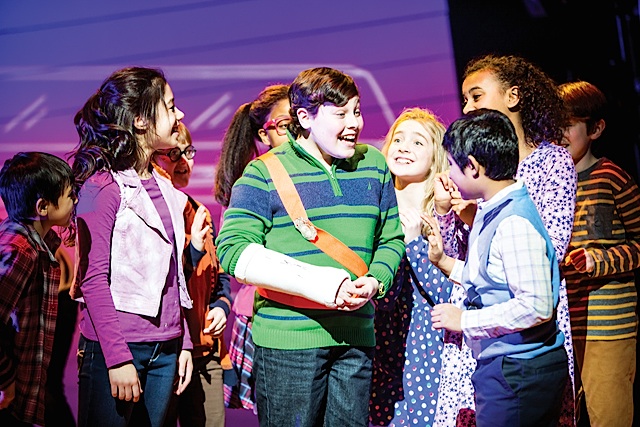 Diary of a Wimpy Kid. Photo by Dan Norman

Adolescence is a time of confusion about changes within the biochemistry of the body, and learning about social hierarchies and how schools nefariously replicate them. The new stage version of The Diary of a Wimpy Kid, inspired by Jeff Kinney’s illustrated novel series, reflects this in a winning Disney Channel sort of way at the Children’s Theatre.

Ricky Falco sparkles as protagonist middle schooler Greg Heffley. He wants acceptance but his early adolescent masculinity is always being measured against socially sanctioned standards of what boys are generally expected to be. He cannot compare to stud muffin, Bryce, a boy admired by the girls for his looks and a certain physical attribute. He is defeated by a girl in a wrestling match. He also wrestles with whether or not to be humane toward a friend of his who measures up even less against the standards for acceptability.

Rachel Rockwell has directed the musical’s 50-plus scenes with high octane energy and vibrant momentum. Andrew Bourgoin’s music direction suits the tunes by Michael Mahler and Alan Schmuckler with a bright spirit. Kevin Del Aguila’s script adaptation needs to focus more on a central moral to the story. The great core of what I think the show is trying to tell us is dissipated in all the pizzazz. But that pizzazz is lots of fun! 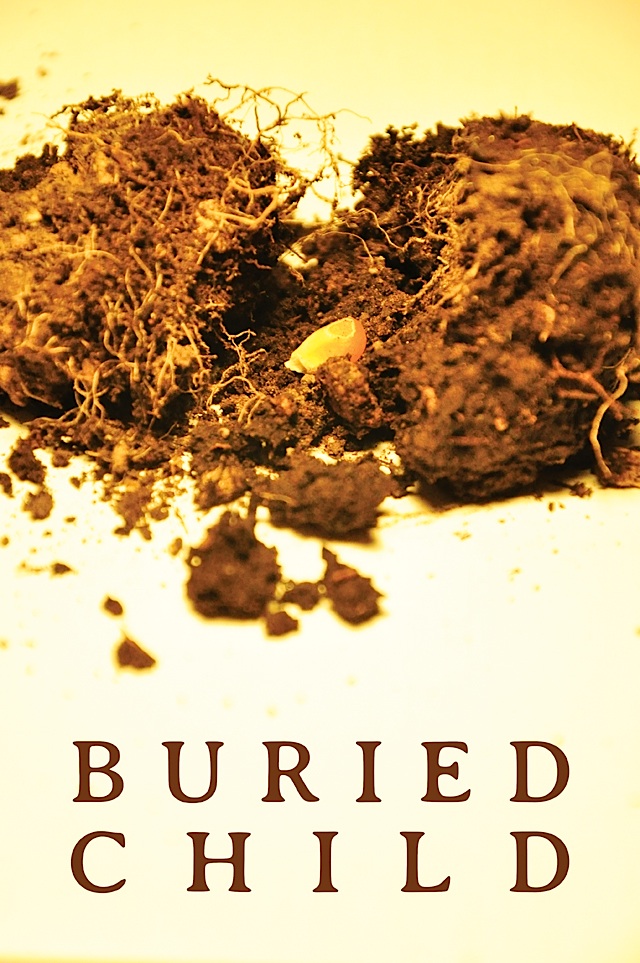 Finally! There is a revival of one of the towering plays of the 1970s: Sam Shepard’s Buried Child. We have seen enough revivals of Shepard’s True West and Fool for Love. We are overdue for what is arguably his masterpiece, not to mention it won the Pulitzer Prize. This cryptic tale about a disturbing rural Illinois family, a returning son, and dark family secrets ranks as one of the major plays of its generation. No one quite comprehends the disintegration of the nuclear American family in the Midwest and western states like Shepard.

Red Bird Theatre Artistic Director Genevieve Bennett stages the classic as that company’s inaugural production at the Southern. She is known for her superb productions of modern classics by Ibsen and Chekhov, renown for his own rural but upper class settings. It will be interesting to see how she approaches the gritty world of Shepard. Bennett shares, “The brilliance and power of Buried Child is that it is simultaneously personal and mythic. It takes contemporary drama and crashes it into Greek tragedy to result in a play that is compelling, dark, and funny with deep American roots.”

Gadfly Productions salutes geeks and nerds in queer and feminist communities with what is described as a One Act Geek Festival. A campy look at heroes and villains as expressed in video games and comic books runs through the play selections. Two sets of plays are offered. Take your pick or see them all.

In Set A, The Further Adventures of….. by Kathleen Warnock muses on the potentially homoerotic feelings between Prince Kal and Commander Zoron in the television program, One Million Years, B.C. Playwright Ellie Effinger-Weintraub turns fairy tale stereotypes on their heads with Your Princess is in Another Lair.

Gadfly Artistic Director Cassandra Snow is staging Michael Merriam’s At the Edge of Flight, also for Set A. She calls it “a really sweet love story of queer people falling in love later in life, but it’s also a fierce story of healing, and taking action in oppressive circumstances, and embracing the gray area between good and evil. Melissa Ballister, played by Valerie Borey, reminds us there’s life after physical trauma and that we can reclaim our own stories, becoming the heroes in our own life once again.”

Set B pushes the envelope with Slut by Nicole Jost, a play with heroes, villains, and mythic and magical characters. Katy Koop’s play, The Amazing Cunt and Lil’ Bitch Take Minneapolis, reclaims sexist insults hurled at women as they transform from victim to vigilante in hunting down and torturing criminals.

Hector Medina renders one of the most darling and endearing portrayals of a gentle gay man you’ll ever see, as Jesus in Viva. Director Paddy Breathnach and writer Mark O’Halloran explore the impoverished neighborhoods of Havana and its lively drag culture. Jesus works as a hairdresser and a sex worker and has aspirations to be a drag performer despite the objections of his aggressive ex-con, alpha male father (a grittily macho Jorge Perugorria). In nurturing contrast, Jesus has a surrogate father/mother figure in Mama played by a resplendent Luis Alberto Garcia, an actor who embodies a character who has balanced both the inner male and inner female within in the face of Cuba’s tumultuous history. This touching film is an added treat now that U.S.-Cuba relations are back in alignment.