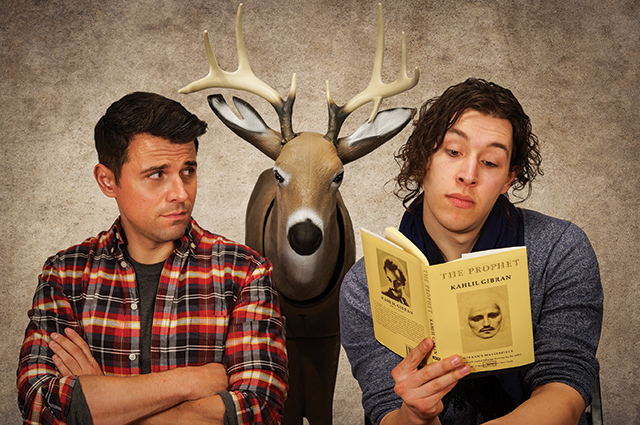 Sons of the Prophet. Photo by Petronella J Ytsma

The 1992 movie comes to the stage by way of Minneapolis Musical Theatre. Vocal director and MMT Artistic Director Christian Unser shares, “The music in Leap of Faith is all original, composed by Alan Menken of Aladdin and Little Shop of Horrors fame, just to name a few. As for the style, it’s a mix of rock, gospel, and current musical theater. While there are scripted scenes throughout the show, the music often winds its way in and out so there are whole sections that are nearly completely sung through. It truly is the kind of music you might hear inside a modern tent revival.”  Featuring the Twin Cities Community Gospel Choir.

Chavarria shares, “I created my Big Gay Mexican Show persona about two years ago. He is a happy-go-lucky character that wants to fill the world with positivity. There is so much hatred encouraged in today’s social media. Fat-shaming articles, homophobic posts, and racist jokes flood my social media feeds every day and it is a constant reminder that this is the type of world we live in. Most of my life I have struggled with maintaining a high self-esteem because most of my life I was told and being educated to be someone I wasn’t. My goal with my art is to inspire positive self image. I want to help those in need of acceptance by presenting my stories in the hope that they can relate and know that they are not alone. The Big Gay Mexican is a friend to all. He finds the beauty in everyone he sees.” 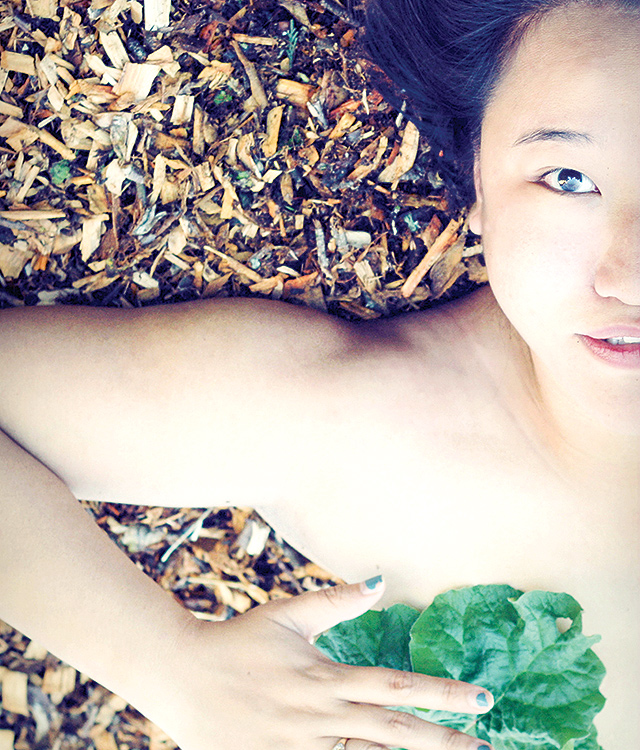 Three substantive female artists (Emily Lau, LIzz Windnagel, and Chienhwe Carol) are featured as part of Open Eye’s May music series. Windnagel points out that “as an American society, we are constantly barraged by images of scantily clad, thin, white models. But rarely do we see naked bodies in the media or entertainment that aren’t Photoshopped or completely controlled by our society’s standards. As female artists, we are taking on the task of challenging this issue and many more that surround women’s bodies and the history of why they are controlled in this way. As singers and dancers, who use our bodies as our instruments, we are held to the same standard of perfectionism as well, and these expectations go deeper than the lines on our skin or the timbre of our voice. To be naked on stage can be truly vulnerable and uncomfortable, but we feel that this can lead to greater courage and compassion. This piece will delve into these themes while also celebrating the luscious nature of our bodies and voices.”

Suzy Messerole took her place in Minnesota queer theater history long ago for her administrative smarts and directorial brilliance for Outward Spiral Theatre Company. She resurges now and then, though not often enough. Happily, you can catch her most recent work in what you can bet will be a fascinating piece.

Messerole traveled to Scotland to create Venus Nefanda, based on transcripts of the 1810 case, “Miss Marianne Woods and Miss Jane Pirie Against Dame Helen Cumming Gordon.” Two governesses were accused of having sex together, hence, the term venus nefanda. Their girls’ boarding school was subsequently closed. Their accuser was a young mixed-race girl with an influential grandmother. You are right to suspect it influenced Lillian Hellman’s landmark Americanized play, The Children’s Hour, but this new script is drawn heavily from the actual transcripts and is co-acted by Messerole and her gifted performance partner from years past, Aamera Siddiqui. Directed by Anton Jones.

Venus Nefanda plays on a double bill with In Between, a story of cultural and language shifts in a woman’s life. Eliza Rasheed is the writer/performer. Directed by Leah Nelson. 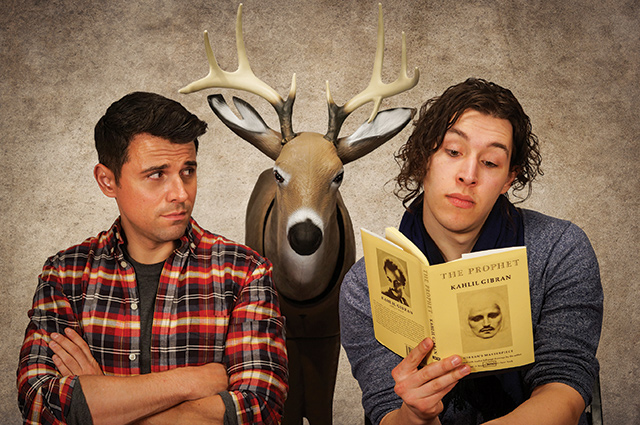 Sons of the Prophet. Photo by Petronella J Ytsma

Jef Hall-Flavin was a driving force behind probably the best queer theater troupe in Minnesota history, Outward Spiral, founded in the 1990s. He also directed perhaps the best A Midsummer Night’s Dream I’ve ever seen. Like his latest project, that Shakespeare production was for Park Square. He shares about this piece: “The gay dynamic in Sons of the Prophet is what I’ve been waiting for. In this deftly written play by Stephen Karam, the two gay characters’ sexuality is one of many factors in the dramatic action, but not the most important one. To me, this signals an important shift away from the kinds of plays I was directing in the 1990s, which were about being gay and the ripple effects of identity.”

Hall-Flavin continues, “The play is a lot of things, but it’s essentially a comedy about suffering, in the context of a second generation immigrant family grieving a loss. Both the older brother approaching 30, named Joseph (Sasha Andreev), and his younger 18-year-old brother, named Charles (Maxwell Collyard), are gay, and out of the closet. The semi-closeted man, a newscaster named Timothy (Dave Gangler), isn’t struggling with identity issues, only professional ones.”

In addition, he adds, “Just like non-gay families, the friction is largely generational. The two brothers have to navigate a worldview that is dying out. Their aging, religious uncle makes them wince with words like ‘faggy,’ ‘Oriental,’ and ‘mulatto,’ and they have to cope like the rest of us: with appropriate amounts of outrage and sarcasm. Karam has drawn intricate characters with fine nuance, and I am thrilled to be working on a play where being gay is just part of life. Plus it’s damn funny.” 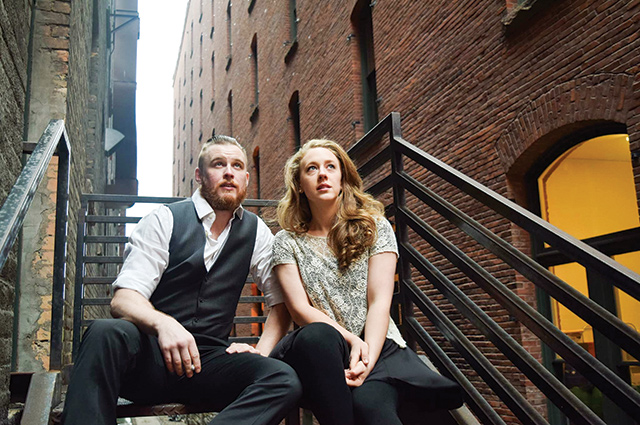 Master gay playwright Tennessee Williams is best remembered by millions for his first Broadway hit in 1945–46, The Glass Menagerie. Director of the Theatre Coup d’Etat revival, Lanny Langston, feels that the play’s “universal themes of familial love, survival, disappointment, and regret become much more powerful to a modern audience as we watch the Wingfield family fight ferociously to escape their own reality: the despair of the Great Depression. Ultimately, Tom is forced to decide between supporting his mother and sister or breaking free of the bonds created by society and familial obligation to pursue his passion. Although considered a tragedy, The Glass Menagerie is one of the most hopeful plays in American history, a beautiful portrait of a family going to extraordinary lengths to protect their own.”

In preparing for his lead performance as Tom, James Napoleon Stone has drawn from Williams’ famous essay, The Catastrophe of Success, wherein the very idea of success as measured in our materialistic society is regarded essentially as a myth. Stone muses that he is “struggling to succeed, and only after ‘success,’ did he realize how much energy the struggle itself truly took. This vital energy, along with the pursuit of Tom’s objective, is something I will work to cultivate with the character.”

Religion is often associated with inflexibility, but Walking Shadow Theatre may counter that with their production of The Christians by Lucas Hnath. Director Amy Rummenie relates that “Pastor Paul, played by Andrew Erskine Wheeler, takes stock of the exponential growth of his once-small church and the words of a missionary who spoke at a recent conference and realizes he disagrees with a core belief of his faith. So he announces a drastic shift to the community’s beliefs, starting a domino effect of changes to his church, community, marriage, and soul.”