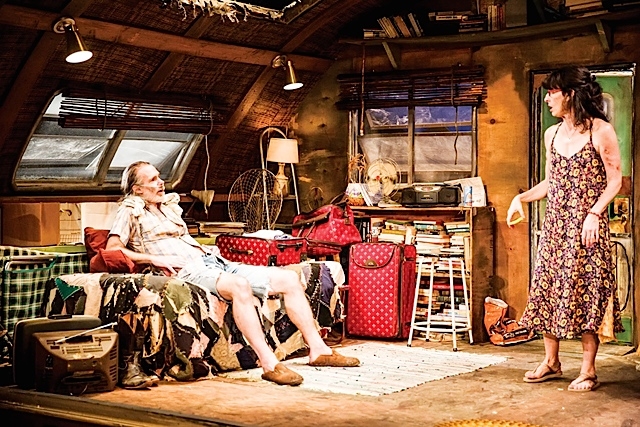 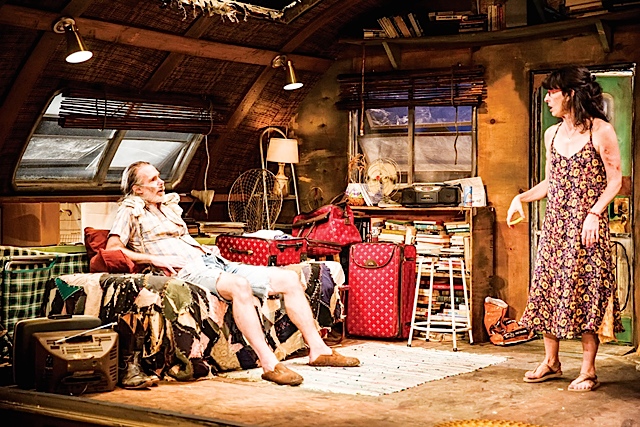 Sharr White’s drama can only work with two truly masterful actors because over 95 percent of the action occurs in a very tight space — a dilapidated mobile home in the Colorado Rockies. Joel Sass’ set at the Jungle has ripped away one of the long sides of the mobile home where a man wearing only an apron with an oxygen supply strapped to his back is intruded on by his ex-wife he hasn’t seen in years.

Terry Hempleman and Angela Timberman as Ulysses and Emma do indeed provide the chops necessary for the roles. You can feel that the characters have a heavy shared history when Emma shows up unannounced. In the style and spirit of a Sam Shepard play, Ulysses looks more like a washed-up rodeo rider rather than the dried-up poet he really is. He is a man whose time seems to have almost run out. In the spirit of western cowboy myth, he wanted his freedom, partied too hard for too long, never appreciated his blessings, and, of course, there’s a deep dark secret.

Timberman’s Emma splendidly personifies every woman who once trusted a husband-father, only to find that he was incapable of keeping up his end of the agreement both to her and their offspring. Nonetheless, she is nobly forgiving and understands that closure over an un-dealt-with past is vital if we are to grow and move forward.

Sass has vividly captured the degenerative ramshackle character of an isolated trailer home — a single man’s pathetic last refuge in a life that went off the rails. Sass, also the show’s director, mines gold in “them thar hills” as Hempleman and Timberman discover truths about one another’s characters as the play teases us till it reveals its deepest truth. This is the first show since Sarah Rasmussen recently took the artistic director reins at the Jungle Theater.

Broadway Songbook — The 70s Songbook
Oct. 9–11
Ordway Center, 345 Washington St., St. Paul
651-224-4222
www.ordway.org
A major shift has taken place on Broadway over the past generation. Those great rock and pop recording artists of the 1970s were about the farthest thing away in the minds of both the general public and show business that one could imagine. However, in recent years, icons of that decade have emerged as Tony-winning artists and/or tunes from their recordings have been turned into musicals. When this trend began, there was some cynicism that Broadway was getting even more desperately commercial than ever. But in hindsight that was mistaken. Artists like Elton John , James Taylor, Carole King, and others have made powerful contributions to the legacy of The Great White Way. At the Ordway, James P. Rocco and Jeffrey P. Scott are preparing a salute to the ’70s and recording artists who would go on to create stage wonderment. 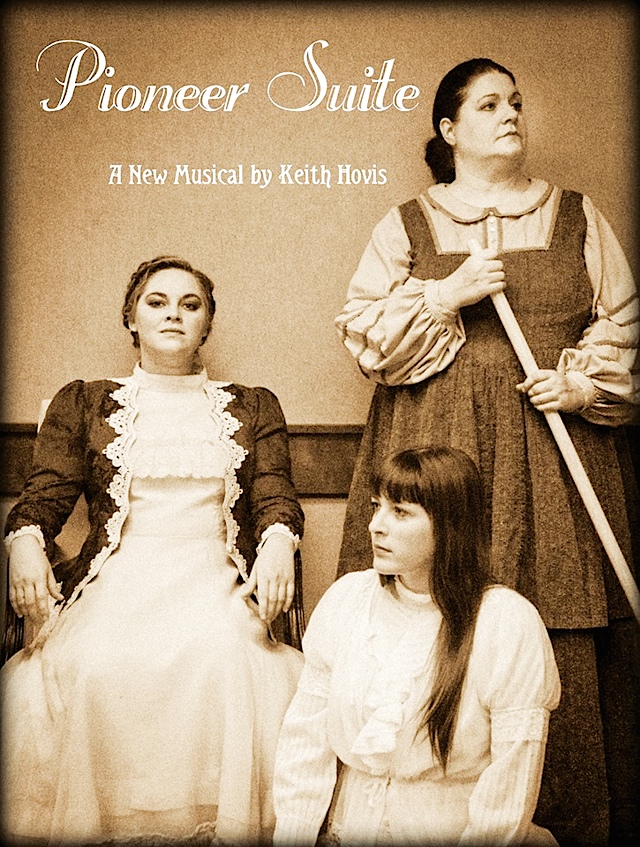 Nimbus Theatre, 1517 Central Ave. NE, Minneapolis
612-816-8479
www.freshwatertheatre.com
Keith Hovis has written and composed the musical, Pioneer Suite, for Freshwater. He shares: “There were two reasons I was interested in writing the show, the first being that the Midwest is underrepresented in plays and especially in musicals. As a Minnesota writer, born and bred, I wanted to write about our history. Second, I was intrigued by the idea of finding three stories that otherwise would not have been told and then building a show around them. As grandiose as it sounds, we live very finite lives and when we die most of our stories will be lost. To me, this show was my way of saying that no matter who you are or what you do in your life, you make an impact on the world in some way. There is always a chance that, at some point, someone may find your story and by reading about it or retelling it you will live again, even if just for a moment. The deliberate choice of choosing Midwest women with a wide range of stories and struggles was also an attempt to showcase lost stories from a group that is not often represented on stage.” 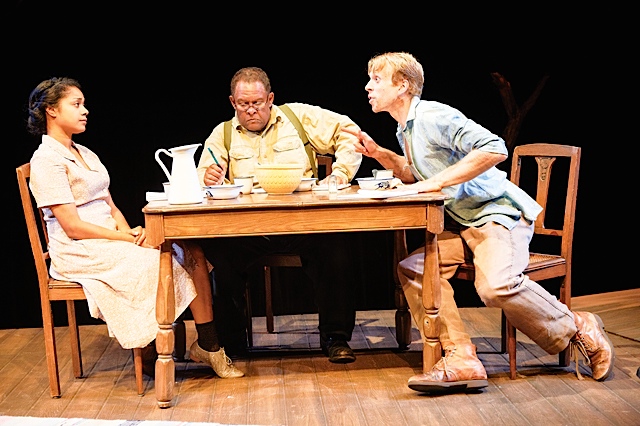 Through Oct. 4
Playwrights’ Center, 2301 Franklin Ave., Minneapolis
612-724-3760
www.franktheatre.org
Naomi Wallace’s drama, Things of Dry Hours, is one of the biggest gusts of fresh air in recent years. She digs into a subject that ironically, has become taboo, not so much with conservatives, but with liberals: the historical fact that in the first half of the 20th century, people who are now protected somewhat by historic legislation were actually active as Communist Party members. Moreover, as Wallace so graphically illustrates in her play, in the 1930s there was an astounding level of poverty and millions felt the American Way wasn’t addressing it.In Alabama, black communists greatly outnumbered NAACP members and even some who aspired to the Ku Klux Klan were seriously considering a Marxist alternative. (Though not addressed by Wallace, at the same time vast numbers of communists among Germany’s Jewish population fueled the Nazis’ ferocious anticommunist propaganda.)Director Wendy Knox has staged a deeply felt production with three penetrating performances. Warren Bowles plays an ostracized black communist intellectual who lives with his defiant daughter played by Hope Cervantes who has been educated by him, though she doesn’t accept the Communist Manifesto as a doctrine. When an illiterate white worker played by Sam Bardwell stumbles onto their property, the father mentors him. This production captures unnerving sexual tension between the two younger people. Misunderstandings and bitterness plague communication on all sides. I just wanted them to kiss and fall in love. You’ll have to see the show if you want to find out what happens. Includes nudity. 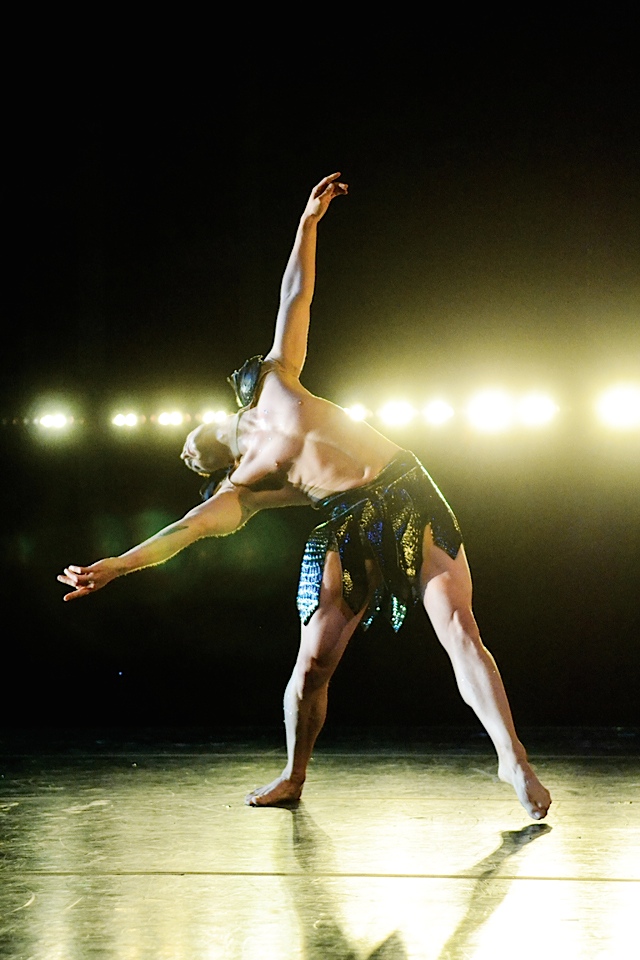 O’Shaughnessy Auditorium, St. Catherine University, 2004 Randolph Ave. S., St. Paul
651-690-6700
oshag.stkate.edu
When acclaimed dancer, Nic Lincoln, worked with Patrick Corbin in 2013, as he says, “I decided to highlight HIV/AIDS within gay culture and dance/art culture. While in New York I saw an exhibit which spoke of the first five years of AIDS in New York. I was struck by the presentation and conversations sparked between gay men and myself in New York. I gleaned that it is important to honor our history and the sages who lived through that time of fear. I believe that it’s too easy to dismiss the power of our history as gays.” Lincoln then applied and received a grant from the State of Minnesota which provided the opportunity to present six solos at the O’Shaughnessy. Minnesota AIDS Project will have a presence at Yes, Sir! to speak about their accomplishments and what they stand for. MAP will receive 20 percent of ticket sales. Music by Venus de Mars and Jocelyn Hagen will also be part of the presentation.