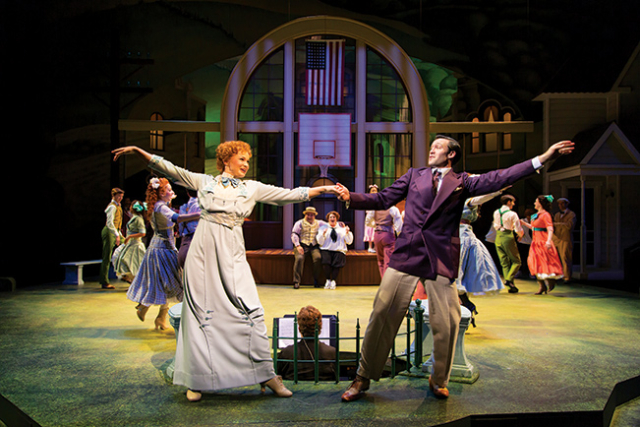 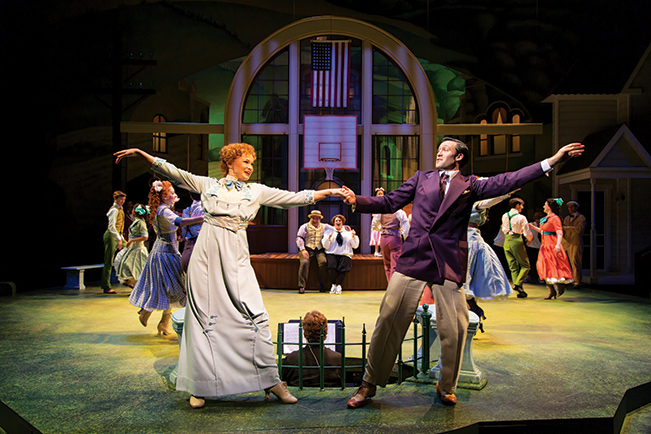 A way in which older men trapped in angrily rigid behaviors can squelch the human spirit is one of the deepest concerns of The Music Man. Those who reflexively deride Meredith Willson’s 1957 musical classic will likely ridicule the “Americana” look and style of that most productions rightly manifest. Of course, that is a superficial interpretation and there is something beautiful about “Americana.”

At the Guthrie, director John Miller-Stephany not only manifests that, but his staging is peopled with a vividly arrayed ensemble of period performances from the very smallest roles to the leads. Everyone impeccably embodies parochial small-town Iowa, 1912, and out of that a vibrantly creative spirit revolts from within to wrestle down the puritanical, punitive rigidity that life and social conditioning have thrown them to. This includes women, children, and some of the men who are genuinely sick of those of their fellow gender being such curmudgeons and brutes. These characters are upright Christians who, ironically, seem incapable of forgiveness or are too easily swayed by the unforgiving among their flock. But maybe Willson’s overview is Providence’s way of leading them back to the Golden Rule.

Danny Binstock plays Harold Hill, the traveling salesman who first tries to deceive the citizens of River City into buying band instruments and uniforms. Though the dazzling Binstock tends to sing some songs too quickly, it is probably not his choice. And it’s great to see a younger actor in a role too often played by men too old for the part. He is well-matched with a luminous Stacey Bono as Marian the librarian who sheds her cynicism to embrace both Harold and the joy of life. This acting pair is endearing.

The Ordway Center is a unique treasure of an institution. Not only does it bring us major musical works from out of town, including Broadway, but it often produces its own musical revivals, which are typically Broadway caliber. Their track record on this count has been excellent for years under the leadership of producing artistic director James Rocco and president and CEO Patricia Mitchell, who retires at the end of the year.

Rocco has distinguished himself as among the top tier of Twin Cities musical directors, which is pretty impressive when you consider that that tier includes Peter Rothstein, Joe Chvala, John Command, Michael Brindisi, and John Miller-Stephany. Rocco, known for his Broadway Songbook revues, recently mounted a dynamo of a revival of Damn Yankees and on the heels of that he has revived Gilbert and Sullivan’s The Pirates of Penzance.

Rocco has a subtly ingenious way of making classics accessible to today’s eye and ear, yet his work exudes the original spirit the show originated in. He says that The Pirates of Penzance affected “the entire future of musical comedy. There are still songs written in the same form today. The songs we hear today have a slightly different musical accompaniment. Our ears have become accustomed to a brighter orchestra sound, which led to my wanting to keep the show exactly as written but with an orchestration that more represented the sound we hear on Broadway today. We are doing the exact songs, written in the same way as originally intended, same tempo, etc., but our show has been slightly re-orchestrated. We do not use any contemporary instruments. All of the instruments could have been used in the original production. We simply highlight the instrumental sounds that people currently expect to hear in musical comedy.” 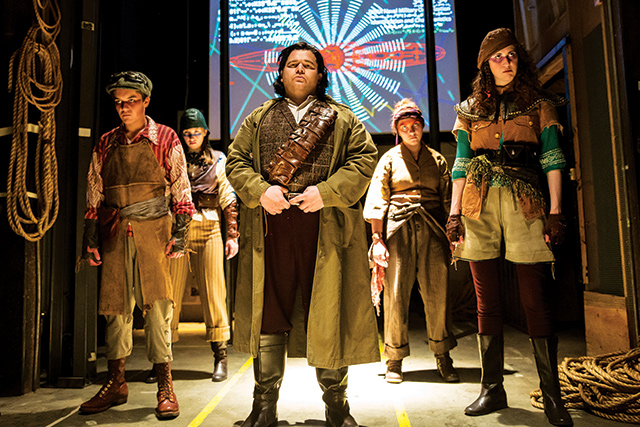 Clever and engaging, the Children’s Theatre had adapted Jules Verne’s classic 1870 sci-fi novel into a contemporary high-tech, high-energy onsite theatricalized experience directed by Ryan Underbakke. Audience members are taken in small groups to walk, trot, run, and often crouch at the command of hyper-earnest actors playing zealous naval officers shuttling them under the sea to different rooms representing the shuttle and the stranded submarine below, the Nautilus. All performances are sharply focused.

Some of the children, the morning I attended, were genuinely frightened and even crying. So this is a show best left for older children accompanied by parents. For those who have difficulties trotting, running, and crouching, this experience may be taxing. Some older audience members in my group had some difficulties. One suggested aspect parents can talk about is Reed Sigmund’s deliberately grotesque performance as Russian first mate of the enemy submarine, Pius Alquis. It’s a demonizing and rather frightening portrayal of a Slavic man that some may want to discuss, whether they are of Slavic descent or not.

Something older kids might discuss is Gerald Drake’s exquisitely decadent portrayal of what appears to be a corrupt American, or Western, general. The piece muses on the way in which we may not always be sure that those in positions of military authority always have our national security as their utmost priority. 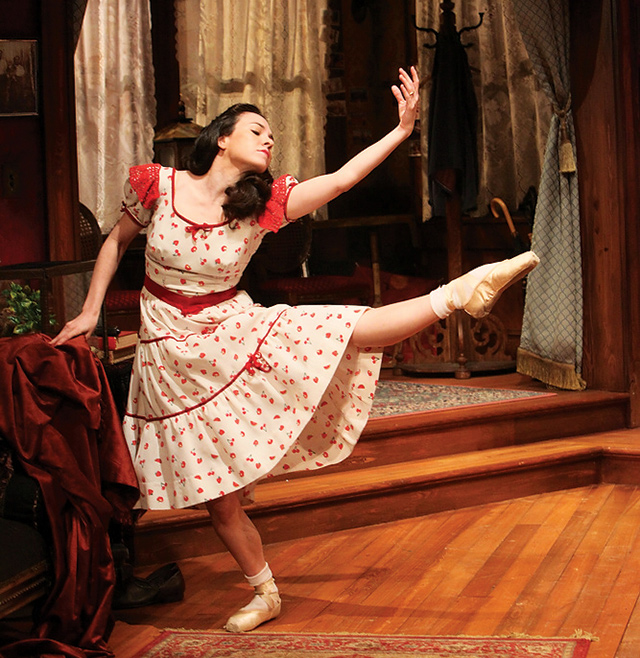 You Can’t Take it With You. Photo by Teri Pickett

George S. Kaufman and Moss Hart wrote the comedy that won the 1937 Pulitzer Prize for Drama. Revivals of You Can’t Take it With You can easily seem old hat and safe, but at the Jungle, director Gary Gisselman has recreated the late ’30s with deep affection for the time; both through the eccentric characters and the various views of life they maintain. You may leave uplifted (I certainly did) but you’ll have a lot to mull over: the deadening way in which the economic rat race can degrade our humanity, how much precious time and energy we spend on trying to impress others when their opinion shouldn’t make a bit of difference, and the way in which men grow old either gracefully or curmudgeonly.

Gisselman has elicited some deeply original performances from some top Twin Cities actors. Anna Sundberg plays “working class” gal, Alice, and Hugh Kennedy plays her wealthy fiancé, Tony Kirby. Sundberg is a consistently strong actress but she has never been this authentic and vulnerable. Kennedy is lovely as a dynamic guy who stands up to his snooty, judgmental parents played with flourish by an actual married couple, Nathaniel and Cathleen Fuller. They are terrific as characters you love to hate.

But it’s Raye Birk as Alice’s Grandpa Martin who really seems to be the beating heart of the show. Birk illuminates a man who has bravely and lovingly questioned the wisdom of struggling your way up the money tree out of a habit born of fear. He may not make you change your life, but you’ll be provided golden nuggets to reflect on. Tom Butsch’s set and Amelia Cheever’s costumes vibrate the ’30s ambience with warmth and style.