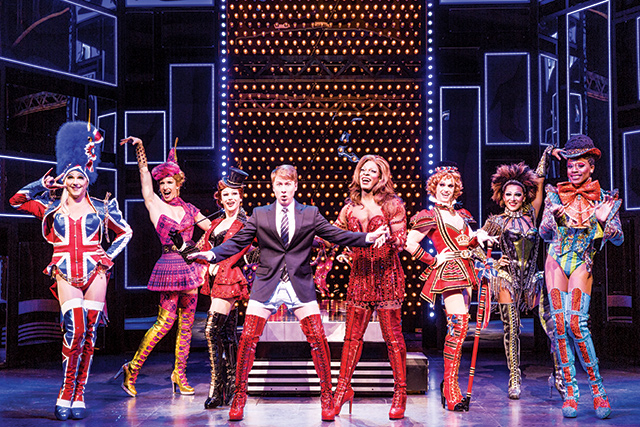 There was a standing joke 30 years ago about people preferring Woody Allen’s early, funny movies rather than his later, more serious ones. However, one of Woody’s early works was a hilarious stage play that has gained classic status: the Cold War spoof, Don’t Drink the Water.

At TRP, director Benjamin Kutschied observes, “The Cold War is a thing of the past, but the world of the play will feel very familiar to a modern audience. The U.S. still has mysterious enemies on the other side of the globe that strike fear into the hearts of many Americans. I could see a very similar play being written in the present day, but it would probably take place somewhere in the Middle East.”

That said, given Vladimir Putin’s entrenched leadership, one wonders if Reagan-Bush Sr. really did end the Cold War as we are led to believe. Maybe Woody’s comedy is more current than we think. 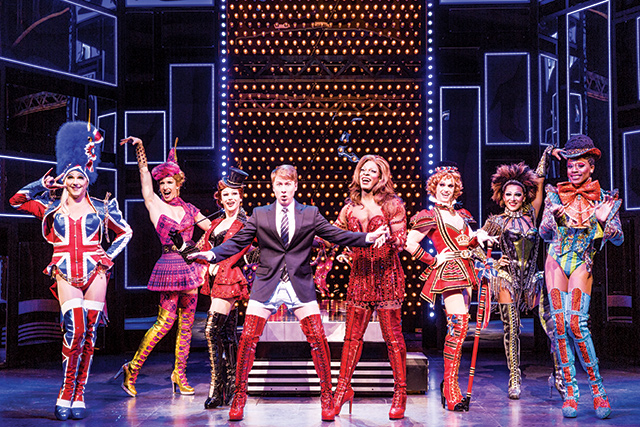 Harvey Fierstein (Torch Song Trilogy, La Cage aux Folles the Musical, Casa Valentina) is arguably the greatest living gay playwright of queer concepts. Pop legend Cyndi Lauper is the first and only solo woman who has won a Tony for Best Score. These two giants collaborated on Kinky Boots. The stage adaptation of the film that won six 2013 Tony Awards, including Best Musical, is about a struggling shoe company in a changing economy influenced by a drag queen named Lola, played by Kyle Taylor Parker in the national tour.

The musical has much to say about accepting one’s self and accepting others. Charlie (Steven Booth) is the young owner who inherited the company from his father. He resents this and uses this as an excuse to not move forward. Burly factory worker, Don (Joe Coots), is challenged by Lola to accept someone else. Fierstein has related, “And in accepting someone else, you can find the steps to accept yourself.”

Leonardo da Vinci (1452-1519) is regarded as the greatest figure of the Italian Renaissance. He was never formally educated, which paradoxically gave him an open-mindedness that he used to monumental success. Unlike today’s slavery to specialization, it was a time when there was nothing wrong with being a mathematician and an artist. The liberated mind behind the Mona Lisa can be explored in manuscripts called the “Codex Leicester” at the MIA. This is a notebook he kept, in which he let his mind rove freely. It is written from right to left, not for any clandestine reason, but because he was left-handed and didn’t want his sleeve to be soaked with ink. You can get up close and personal and gay visitors may well wonder if his ability to let his mind roam freely is what brought him in touch with his suspected homosexuality.

After you see the Codex, you can (and should) directly step into Mark Mothersbaugh: Myopia, which in our own postmodern time reveals the roaming imagination of a man you may already know of and even be a fan of. Mothersbaugh was a founding member of the band, Devo, which explored the “de-evolution” and downward spiral of forms and structures from U.S. military policy to society’s seemingly endless appetite for violence. That said, Myopia shows us that such a seemingly nihilistic exploration has actually ended up “evolving” his consciousness toward a brighter overview.

Myopia is an utterly upbeat and vibrant exhibit that will surely make you smile. I actually found myself laughing at times. The Rolly Polly figures reminded me of Hummel figurine mutations. One room is filled with hundreds of clever postcards designed individually by Mothersbaugh. They demonstrate wild and wide versatility. Enlarged rug versions of some of them convey his satirical view of so-called human progress. You’ll also see photos made to look like mutated human forms, sensuous fiberglass sculpture reminiscent of Pilobolus dance formations, and some very unusual pipe organs which you can also hear. It’s a whimsical experience that nicely contrasts the heavy, albeit splendid, feel of the da Vinci section. 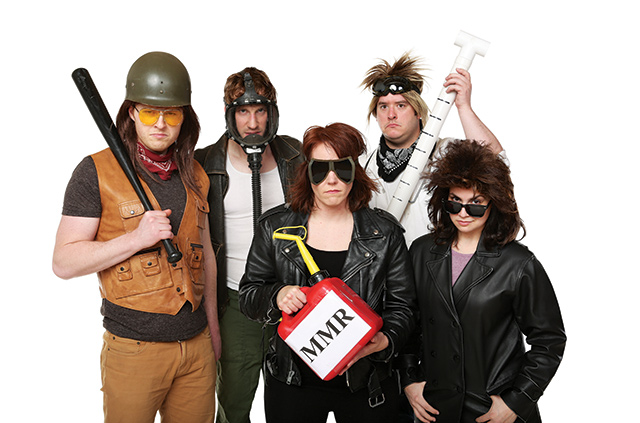 If you track the news at all you know there is a wide campaign to promote the denial of science. Though questioning scientific conclusions and where they are and may be leading us can be a virtue, it becomes petulant and potentially destructive to deny evidence. Brave New Workshop, the region’s premier comedy theater, takes this on with savage humor in Mad Vax: Beyond Measledome. And you don’t have to be familiar with Mad Max films at all. However, like those films, it delves into horrendous prospects in a post-apocalyptic world. These brilliant skits muse on the line, “No one thought the apocalypse would start in or by….”

Fundamentalist Christians and unscientific views of dinosaurs. The treacherously foolish prevalence of climate change deniers. How simply being a mother makes you an expert on vaccinations. A cleverly stirring comparison and contrast between the superstition-driven state of Oklahoma and the more rational Minnesota to the music of Richard Rodgers. These often scathing vignette themes are boldly served by BNW regulars Taj Ruler, Tom Reed, and Bobby Gardner, joined with newbies, Ryan Nelson and Heather Meyer. Directed with aggressive glee by Caleb McEwen.

If you are looking for the glamorized view of transgender identity that media outlets push with Caitlyn Jenner, then you won’t find it in Sean Baker’s little gem of a movie, Tangerine. You may not even find these gals even the least bit likable. But if you’re not offended too easily, you will find them captivating. And if you are someone who knows that economics greatly impact how we approach life, no matter what our identity, you’ll appreciate, and maybe even admire them.

Sin-Dee (a crackling Kitana Kiki Rodriguez) has just gotten out of lockup and learns from her best friend, Alexandra (a luminous Mya Taylor), that her boyfriend/pimp has been screwing around. This sets Sin-Dee off into what must be one of the biggest tizzies in film history. The performances are dazzling and dangerous, including a major subplot where an Armenian cabbie is played by Karren Karagulian in a revelatory and vulnerable performance about an ostensibly heterosexual man’s desire for transgender people.

Tangerine gets right inside the gritty retaliation-based lives of these poor transgender sex workers on the West Hollywood streets. It pulls no punches, does not default to “positive image” propaganda of the underreported queer underclass, and if you don’t get smug when you are watching it, you will see that Baker has ingeniously revealed grim socio-economic realities faced by all the characters, all of whom are marginalized. It also raises what, for some, are disquieting questions about the feasibility of monogamy within those who work in sexually charged businesses. Tangerine will make you giggle and make you think. Five Snaps!