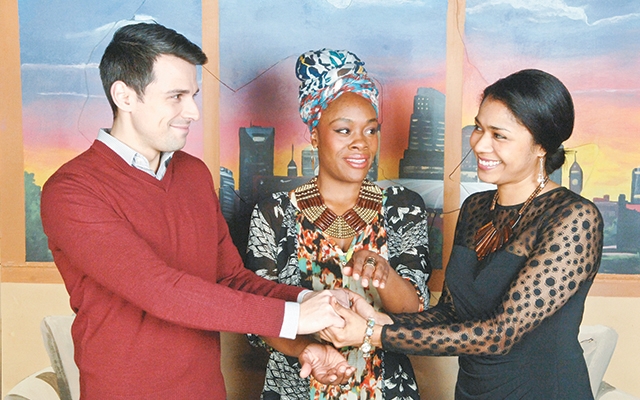 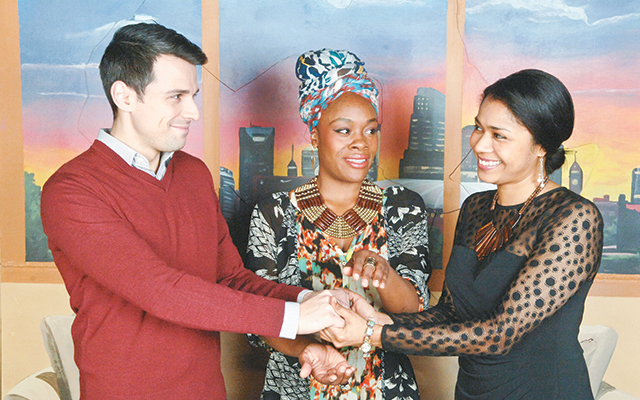 Minnesota has been a major magnet for displaced people and immigrants since the 19th century. In recent years, African people, displaced by American, European, and Chinese national/corporate interests and their nontransparent militarism, have been compelled to have rightful denizens seek refuge away from their homelands. Mixed Blood Theatre’s 55454 Series on Africans and Muslims in America presents a new play written by beloved actor-director Warren Bowles.

African America reveals how so many Americans see the African continent as one monolithic culture rather than the vast mix of languages and cultures that it truly is. An African American woman is made aware of this by someone with a Pan-African overview. Bowles shares, “We’ve all noticed the changes in the cultural landscape. Women, citizens of color, the GLBT community, and our immigrant population are finding increased social and political power and influence. These changes should not be noticed then ignored. They should be understood and appreciated. African America is an attempt to start really understanding our Somali, Liberian, Ethiopian, and Sudanese neighbors and those of other African heritage. They are the new Minnesota, new America of which we are just a part.”

In the 1980s The Color Purple, both Alice Walker’s novel and Steven Spielberg’s film, were a cultural phenomenon. The epic story of Celie, an oppressed black woman in the Jim Crow south, struck a nerve with audiences across the racial spectrum. In 2004 Pulitzer Prize-winning playwright Marsha Norman teamed up with the eclectic music/lyrics team of Brenda Russell, Allee Willis, and Stephen Bray to form what would become the Tony-nominated musical version.

Prosek, who co-directs the music with Gary D. Hines, calls The Color Purple score “pretty amazing. Because the story takes place over thirty-plus years, it takes you on a whirlwind of styles including gospel, jazz, and blues, and infuses those classic styles with a modern groove that allows the audience to move effortlessly through Celie’s journey. There is a point in the story where Harpo opens up a juke joint, and I knew I needed that sound for our production; thus the six-piece live band: piano, woodwind, trombone, guitar, bass, and drums. They sound incredible, and with the cast, The Color Purple is going to rock Park Square!”

Into the Woods
Area Movie Theaters

The matinee audience I was a part of when watching the Disney film version of Stephen Sondheim’s innovative musical contained several children. I wondered if they would take to it. Moreover, the film is darkly atmospheric and I thought “Will this scare or bore them?” But I was very pleased that they were into it! And so was I.

There has been a bit of a stir caused by ardent fans of the stage musical about cuts made for the film. Cuts made to make the film less bleak, which in this very particular case, I understand. And indeed, Sondheim himself has his own thoughts about that in a recent Playbill interview. (I think he makes alot of sense.) Note, too, that James Lapine — who wrote the book for the musical — has written the screenplay and thankfully you feel that throughout.

The great virtue of Into the Woods is its recasting of the characters Little Red Riding Hood, Cinderella, Rapunzel, and Jack of beanstalk fame into a unique and original new situation which compels us to reconfigure what for most of us have been templated Brothers Grimm archetypes in our subconscious set in childhood. That’s something that the film still totally captures.

The story lends itself naturally to epic vision, which the film certainly has in spades. But cinematographer Dion Beebe’s many splendid close-up camera shots, matched with editor Wyatt Smith’s magically deft incorporation of those shots, achieve a breathtaking blend of intimacy within the spectacular. It’s director Rob Marshall’s best work since Chicago over a decade ago. Much has been said of Meryl Streep’s terrific witch performance and rightly so. But the young cast is just as much in step. Anna Kendrick’s Cinderella is a revelation. Simon Russell Beale is touching as the village baker. Chris Pine and Billy Magnussen as royal brothers are simultaneously darling, arrogant, and joyous. And it’s lovely for us old-timers to see the legendary Frances de la Tour in a brief but satisfying turn as the Giant. 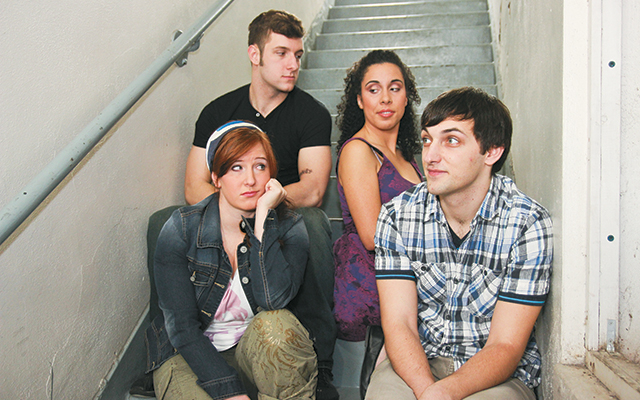 This contemporary re-imaging of Edmund Rostand’s classic 19th century play, Cyrano de Bergerac, is set in a high school, racked with all those confused hormonal feelings of inadequacy, peer pressure, and erotic/romantic yearnings. Minneapolis Musical Theatre and Hennepin Theatre Trust present Barry Winer’s acclaimed musical Calvin Berger under Joshua James Campbell’s direction. He likes how Winer’s Calvin “actually doesn’t have a big nose. He thinks he does. So many of our insecurities are in our mind. I hope this musical allows people to let go of some of those mistaken insecurities. We all had insecurities in high school. I was the over-involved kid — way too many activities. Also, I’m a Former Fat Kid — FFK — so I carried the weight of that, literally and figuratively, around with me for a long time. I never thought I was the cute, attractive one.”

Title role actor Gregory Adam says, “For this, I didn’t even need to go back to high school to draw off insecurity issues. We all have things that we feel self-conscious about but over time find redeeming qualities in ourselves that outweigh those small insecurities. The main difference is that in high school you haven’t pushed yourself out there enough to know that you can recover from rejection. As a result, the thought of being rejected, relative to everything else, is quite literally one of the worst things that could happen in your life. After you add more life experiences, those things seem so miniscule but in high school it has so much weight to it. ”

Full Disclosure: I think England’s Caryl Churchill (Cloud 9, Top Girls, Fen, A Number, Far Away) is the greatest living playwright, bar none. So the fact that Frank Theatre’s Wendy Knox, arguably the Twin Cities’ best stage director, is producing her work again, in a regional premiere, is something truly special.

Knox reflects, “I’ve been fortunate enough to work on Churchill’s work on five different productions, three at Frank and two in educational settings. What’s thrilling about her work as a writer is that she has no fear about reinventing herself with each piece. Her work is so diverse and with each subject she tackles, she freely works in whatever form she chooses. What is remarkable — and challenging and thrilling — about Love and Information is the blank slate that she provides. There are no character descriptions, no setting information, no dialogue assigned to any particular characters: all of that becomes our job. We’ve spent the past week experimenting with the shifts in meaning when scenes are read by two men, a man and a woman, a white actor and a black actor, an older actor and a younger actor. She’s provided us a fantastic puzzle, to which there are no right or wrong answers, but many different answers. It’s a daunting but incredibly exciting project.”