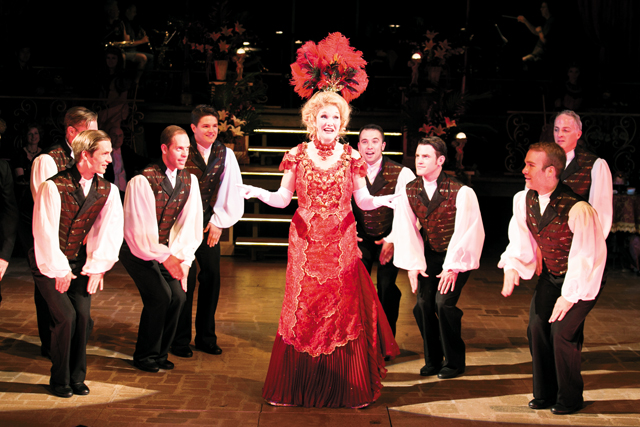 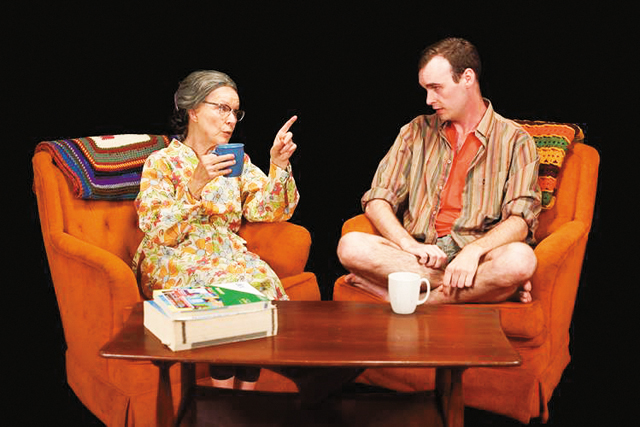 4000 Miles
Dec. 5 – 21
Boss Stage at Park Square Theatre, 408 St. Peter St., St. Paul
651-291-7005
www.parksquaretheatre.org
4000 Miles by Amy Herzog was a finalist for last year’s Pulitzer Prize for Drama. Gabriel Murphy as Leo and Linda Kelsey as Vera portray the play’s two lead roles on the newly opened Andy Boss Stage at Park Square Theatre.
Murphy relates that the play “begins with 21-year-old Leo having just completed a cross-country bike trip showing up unannounced at this 91-year-old grandmother (Vera)’s West Village apartment in the middle of the night. At the top of the play Leo is emotionally wounded and lost, still suffering from a recent traumatic event. Over the course of the play we see how Leo’s relationship with his feisty Marxist grandmother allows him to begin to heal.”
Murphy notes “his combination of fierce intelligence and frequent unawareness. He has moments of being very astute, very wise, followed by moments of being extremely juvenile and irresponsible, which makes for some very funny interactions with Vera. At the same time, all of his behavior is undercut by a deep well of sadness. Because of Leo’s emotional baggage, watching him begin to build a very real, very vulnerable friendship with Vera is very moving.”

Hello Dolly!
Through Feb. 27
Chanhassen Dinner Theatres, 501 W. 78th St., Chanhassen
952-934-1511
www.chanhassendt.com
Chanhassen Dinner Theatres lives up to its rep as the nation’s flagship dinner theater company with an effervescent and uplifting production of gay icon Jerry Herman’s Hello Dolly! Michelle Barber gives a lead performance so splendidly dynamic you may feel like dancing out of the theater after the curtain call. Aside from her terrific vocals, Barber captures the essence of a woman at midlife who is both materially and spiritually weighing her options about how she should live the rest of her life. As breezy as the performance rightly is, you get the numinous depth of a woman of substance and experience.
Michael Brindisi’s bouyant direction of his vibrant ensemble is brisk and beautifully in synch with the gay 1890s setting, as are Nayna Ramey’s set and Rich Hamson’s costumes. The tight-fitting body suits in the Before the Parade Passes By number beguile.
Keith Rice finds the heart and callousness inherent in Vandergelder, the man Dolly is out to reform. Cat Brindisi as milliner Irene, and Frank Joseph Moran as her love interest, Cornelius, are a divine match. Tamara Kangas Erickson’s choreography dazzles with vaudevillian flair. Andrew Cooke’s music direction is simply joyous. 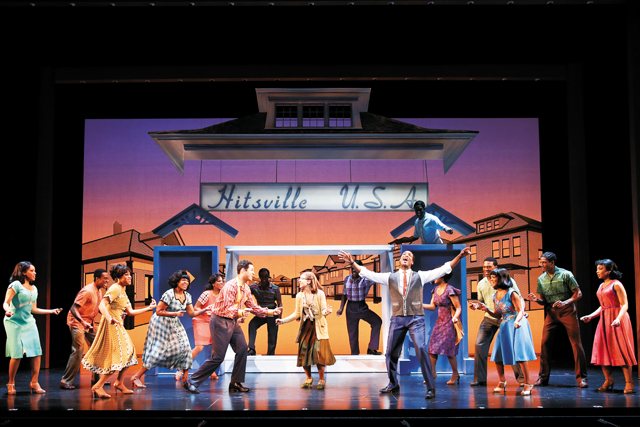 Motown the Musical
Dec. 16 – 28
Orpheum Theatre, 910 Hennepin Av., Mpls.
800-982-2787
www.hennepintheatretrust.org
The story of Motown record label founder Berry Gordy is now a musical on national tour. Ensemble member Rashad Naylor describes his preparation: “I immersed myself in the music and any interviews I could find on the several artists that I portray. I studied what made those artists special in their own right, and with the help of our creative team we found the most explosive marriage of my talents and theirs. Having the opportunity to actually talk one-on-one with Mr. Gordy himself gave me an untapped source of insight into the minds of those artists at that time. The tricky part about the research, for me, is that several of my characters, for example Jackie Wilson, are in the show at the start of their career. Most of their interviews speak about them after they were already famous or even dead.” 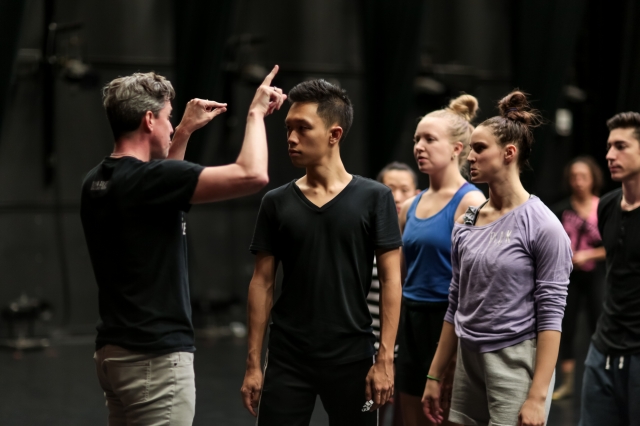 Past (Present) Tense – University Dance Theatre’s Dance Revolutions
Dec. 4 – 7
Rarig Center, U of M, 330-21st Av., Mpls.
612-624-2345
www.theatre.umn.edu
When acclaimed choreographer Scott Rink and his partner Michael Tennant were planning a 2014 trip to Scandinavia last year, they had hoped to visit Russia but, during the Olympics, they heard troubling stories of gay oppression under President Vladimir Putin. Brutal assaults on gays and lesbians by gangs and police that sometimes left them dead or severely maimed were becoming routine in the face of specifically codified anti-gay legislation.
The atheistic USSR was no friend of gays but Putin’s Russia and its Duma legislature have embraced a rigidly puritanical version of Christianity. Blasphemy has also been coded into an actual punishable state crime, hence, reinforcing institutionalized homophobia. Russia reflects an anti-secular global trend wherein separation of religion and state is devalued.
Rink’s new work, Past (Present) Tense, is motivated by these dreadful developments. He shares “the US State Department issued warnings deeming travel in Russia to be unsafe for members of the GLBT community. While we were mildly fearful of travel to St. Petersburg, it was more a desire to funnel our tourism funds away from this homophobic climate. Having stopped in Berlin just prior to what would have been our next planned stop of St. Petersburg, there was a feeling of history repeating itself. So for my current project, I wanted to create a war dance, or ritual of sorts, to prepare for battle against this oppression. And for me, who better to lead the cry than Shirley Bassey.” (Note: in Nazi German death camps, gays wore pink triangles.) 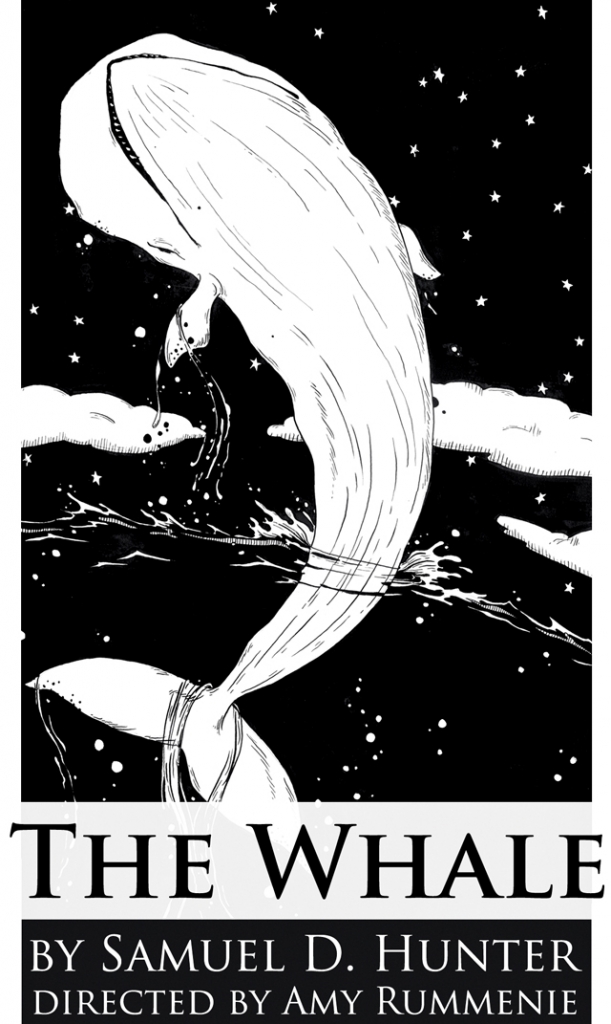 The Whale. Image by Whittney A. Streeter

The Whale
Through Dec. 20
Mixed Blood Theatre, 1501 S. 4th St., Mpls.
800-838-3006
www.walkingshadowcompany.org
Samuel D. Hunter’s drama has perhaps the most obese protagonist ever written and it also has intrinsic gay subject matter. Zach Curtis plays Charlie in Walking Shadow’s area premiere. Director Amy Rummenie relates that “superficially, it’s about a tremendously large man and the way he reaches out to the people around him in the light of impending health crisis. But its hidden depths are what really resonate with me. It grapples with grief, love, human possibility, inherent evil, and redemption. Hunter (addresses) Charlie’s sexuality, family betrayal, lost love, and the power of his own body to shelter and endanger him at the same time. Charlie is a man who has so retreated from the world that he hides within his size to keep others and his own past at bay. Suddenly, with death fast approaching, he has a very small chance to make a difference in the future of his malevolent teen daughter (Katie Adducci). At the same time, the surprise visit of a renegade solo Mormon missionary (Zach Garcia) brings him closer to answering the mystery of what destroyed his lover ten years ago.”