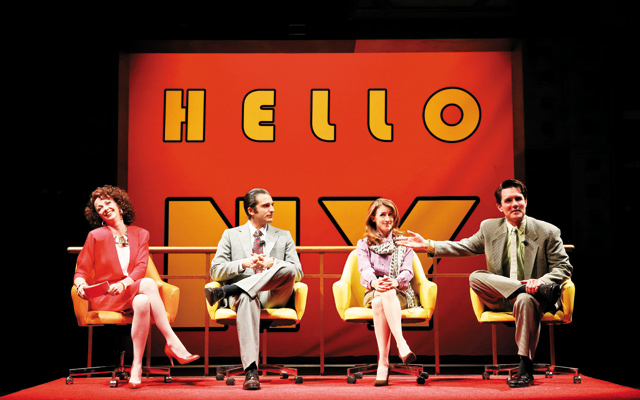 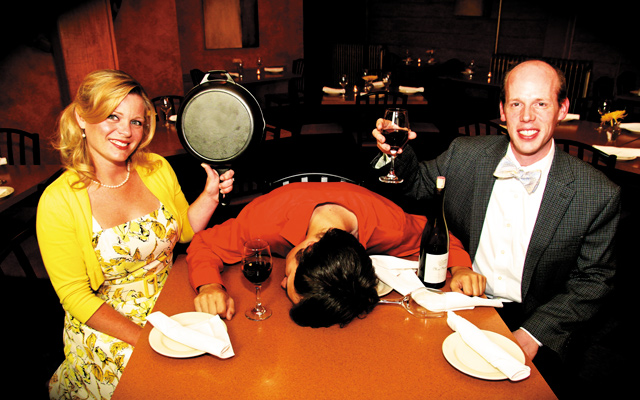 Minneapolis Musical Theatre begins its new season with a transgressive musical staged by its new Artistic Director, Christian Unser, as well as support from Hennepin Theatre Trust. Eating Raoul, the 1980s cult film, didn’t go mainstream because its themes of cannibalism and sex work, juxtaposed with middle class aspirations, implied a lack of optimism on the Reagan era’s rosy morning in America pablum. The audience that saw it was limited in number but its popularity exponentially increased on alternative film circuits. Therefore, all these years later it has become the perfect recipe for an offbeat stage adaptation.

However, in the stage musical version, the ’80s have been nixed. Unser says the musical “transports the murderous Mary and Paul Bland back in time to the swingin’ 60s. While maintaining the lecherous behaviors of the other characters in the movie version, this time shift allows Mary and Paul to be more believable as a prudish married couple. They grew up sheltered in the ’40s and ’50s. They even sleep in “Ozzie and Harriet” beds, which makes more sense in the ’60s than the ’80s. And when the bodies start falling, that naïveté lends itself to misunderstandings and situations they’ve never had to deal with before, which generates most of the comedy and inspires the musical numbers, too.”

Andrew Hinderaker’s play has a unique structure: four 15-minute quarters with halftime show. It’s likely to have more emotional depth than any game you’ve ever gone to: two dozen men, full-contact choreography, and penetrating inquiry into notions of masculinity. And this was actually slated to run well before the current NFL scandals! Synchronicity indeed!

Quadripalegic actor Tobias Forrest says Colossal “tackles homosexuality and disability while finding balance in the struggle that a football player and former dancer must go through after a spinal injury. My character, Mike, must redefine himself as a young gay man who comes to terms with both his sexuality and his disability; however, the real message seems to be more about love than sexual preference. Mike rediscovers his love for football, redefines his love for his father, and reveals his love for a fellow teammate.”

Transgender Director Will Davis calls Colossal “A play about the trauma of losing an identity or a way of being in the world and grappling with what it means to create a new identity in the face of the unknown. Mike is a closeted athlete competing at the top of his game when he sustains the injury that changes his life forever, an injury which is all tied up in his love for another teammate, Marcus. As Mike must make a choice about whether he’ll live in the past or move forward into an uncertain future, he is haunted by his feelings for Marcus and what it has cost to love him.”

Gadfly Theatre continues to build its reputation as a committed source for queer-oriented stage work. Immanuel Elliott, who is directing Girl Gumshoe & Detective Dad, describes the set-up by playwright Eli Effinger-Weintraub: “Gina Davenport (Lauren Diesch) is moving out of her parents’ basement and into her first apartment with girlfriend Sarita (Kathryn Fumie). She has to navigate the tricky situation of growing up and remaining a child. Her relationship with Sarita and her relationship with her father, Troy (G. Zachariah White), often bump up against each other in both comic and tragic ways. The idea of cohabitation and what it takes to make any relationship work run thorughout the play with Gina and Sarita grappling with what this huge milestone represents for them.”

From 1965 to 1989 straight protagonist, art history professor Heidi Holland (a winningly introspective Kate Wetherhead) navigates changing social expectations about women from both the political left and right with a steadiness that takes an emotional toll on her, but which builds her character. Through that, she maintains a deep friendship with Peter Patrone, a gay pediatrician with whom she is essentially a surrogate family member. Zach Shaffer’s touching performance reveals a man who himself must navigate the manly expectations foisted on the American male of our species as well as those which gay men of the time had to contend with. The anguish of AIDS in the ’80s is powerfully portrayed.

Mo Perry is brusquely delightful as a lesbian feminist who makes her views felt at a women’s support group in Ann Arbor, 1970. Perry is one of a terrific quartet of actresses who each shine in mulitiple roles: Stacia Rice, Tracey Maloney, Eleonore Dindy. These other three each have, among others, their own bristling turn as tools of corporate media, something which the late Wasserstein (1950-2006) is clearly cautioning about. Director Leigh Silverman has evoked the era and its passions with a cast that was probably only born well into the play’s time span, if not later. She has guided the show with a sharp eye and joyous clarity. And Laura Adams’s hair styles are simply smashing!

Swedish playwright August Strindberg (1849-1912) still holds his own as a master playwright when it comes to the proverbial Battle of the Sexes and Miss Julie may be his most vivid example of that. At the American Swedish Institute, Theatre Coup d’Etat director Peter Beard points out that “dominance and submission in Miss Julie cannot be separated from the class and gender struggles that are present throughout the play. First is the difference between Miss Julie (Kelly Nelson) and her valet, Jean (James Napoleon Stone). Miss Julie obviously is in the dominant position as the character who is higher on the social ladder, but Jean wields his own power in his own right as a man. Throughout the play both are at times dominant of and submissive to the other. They both borrow words from each other in what Strindberg describes in his foreward as ‘the weaker steal and repeat the words of the stronger.'”

Beard also points out Miss Julie and Jean’s relationship with another servant character, Christine (Brie Roland): “While Christine states constantly that she knows her place within the hierarchy, she exerts a power over Jean that cows him into doing her will up until the very end, when again he asserts his manhood. The back and forth plays of master/servant relationships and who asserts dominance over whom are constantly changing. It is this constant upheaval and power struggle that make for one of the greatest character-driven early naturalistic plays.”

Comedy at a horror festival may seem incongruous but the Southern Theater will be hosting a fair bit of it for your Halloween fun. And they always say that laughter can dissipate fear and anxiety. You can see a uniquely bizarre take on Antarctic explorer Ernest Shackleford, a comic version of Dr. Jekyll and Mr. Hyde, and a inquiry into why we are frightened of dolls. Their creepy eyes, those fixed smiles, and wondering if those eyes just moved! On a more serious note, one piece deals with “Body Integrity Identity Disorder.” Seriously! It all comes from the cryptic minds of some very accomplished Twin Cities performance figures.