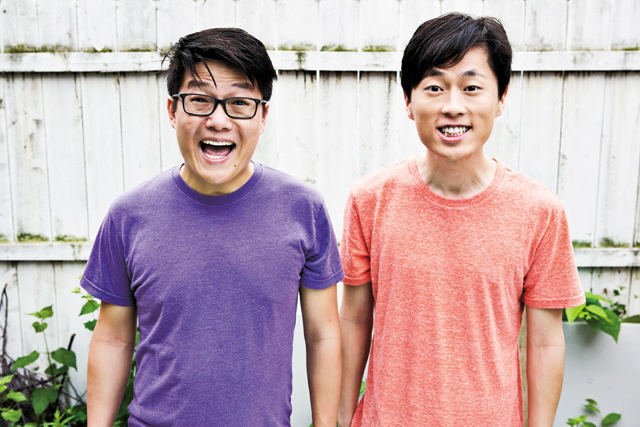 The issues of Korean adoptees have become the subject of various dramatic works generated in the Twin Cities in recent years. Sun Mee Chomet’s How to be a Korean Woman is an acclaimed example. Now there’s a male perspective on the subject with Middle Brother which has been workshopped locally with Mu Performing Arts, was read at New York City’s Leviathan Lab, and was a finalist for the National New Play Network Showcase. Local writer-performer Eric Sharp tells his story of brothers being reunited and the need to put that into perspective. Robert Rosen directs.

Enda Walsh is one of Ireland’s foremost playwrights and he is known for a quirky style that has a distinctive way of drilling into confrontational subject matter. Frank Theatre Artistic Director Wendy Knox is staging his The Electric Ballroom. She relates that it’s “about storytelling and how the narrative is controlled by who is doing the telling. It’s about an event that happened years ago. Two sisters in their 60s recount the events of the evening, but from different perspectives. The story is reenacted regularly as a cautionary tale for their younger sister, in her 40s. The sisters haven’t left the house in years, and the younger sister is the only one who has the chance to escape. Enter a hapless fishmonger of the village who perhaps represents the younger sister’s only ticket out, and he gets drawn into the reenactment and delivers the surprise ending of the piece.”

Moira Buffini’s drama is set in the World War II era but its concern with trust based on national allegiances is uncannily resonant of the present day. Amy Rummenie, director of the play for Walking Shadow, observes, “There is a pair of lines of erotic tension that run through Gabriel. One is romantic in nature, but fraught with complications: is the handsome young Gabriel (Ross Destiche) a safe but endangered British gent, or a lost German agent with darker secrets? Even Gabriel doesn’t remember, and neither is romantically safe for Lily (Miriam Schwartz). The second relationship is darker and even more complicated: the mother of the house, Jeanne (played by Katherine Kupiecki), negotiates a delicate balance between her conscience and taking bold risks to protect her family. She dances a dangerous dance with Major Von Pfunz (Wade A. Vaughn) in a time where ‘horizontal collaboration’ between Nazi officers and local women was a necessary tactic.”

Pillsbury House Theatre in coproduction with the Mount Curve Company is presenting one of the major gay-themed plays of our time at the Guthrie. Marcus; or the Secret of Sweet is the third of playwright Tarell Alvin McCraney’s acclaimed Brother/Sister Trilogy and this looks to be the best of the three.

Nathan Barlow, who has given strong performances at Illusion and Mixed Blood theaters, is in a plum role here. He observes, “There isn’t much of a secret about it. Everybody knows that Marcus is ‘sweet,’ even though he is still navigating his own sexuality. One thing we have been discussing in rehearsal about the term ‘sweet’ is that it doesn’t necessarily mean ‘homosexual.’ Marcus’ journey has turned out to be more complex than just him ‘coming out.’ He is trying to find out the right way to find intimacy with someone.” 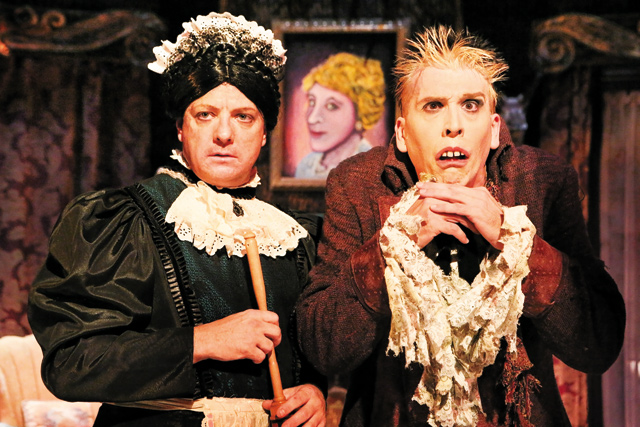 The Mystery of Irma Vep. Photo by Michal Daniel

The Jungle is reviving one of their favorite staples. Charles Ludlam’s two-person play requires that two men do all the roles, which means crossdressing and lots of costume changes. The farce draws from Victorian melodrama, vintage horror flicks, madcap screwball comedy, and the camp style that Ludlam gloried in. Actor Bradley Greenwald says, “We spend almost as much time backstage choreographing the changes as we do tech-ing the scenes themselves. Try getting into your clothes in 10 to 12 seconds. Then try going from a man to a woman in full Victorian garb in the same amount of time. It’s hard and you need help. That’s why we have a crew of five back there—three more than the cast!  It’s all minutely choreographed so that it happens the same way every time, no fumbles or wiggles or hesitation. Rip off one costume, then step into an intricately puddled dress on the floor—right foot, left foot, right hand, left hand—arms up for wig, take teeth out while inching toward the entrance door as the velcro is attached. Voila!  The crew works like the dickens back there and that’s why they get their own well-earned bow at curtain call.”