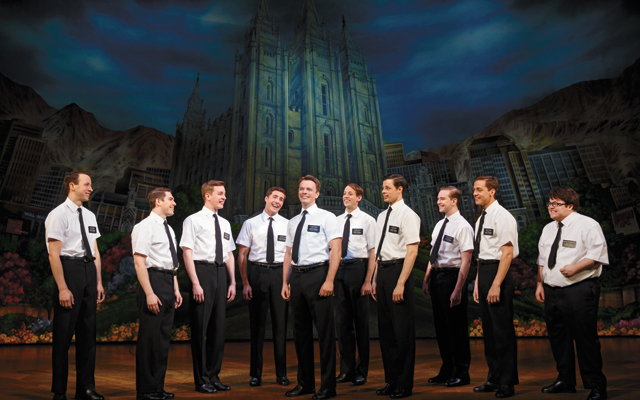 This musical religious satire has put mainstream television values on track on The Great White Way with Herculean force. Nine Tony Awards and continual sold-out Broadway and touring success has made The Book of Mormon a phenomenon. Robert Lopez, who composed the music for the Tony-winning Avenue Q, a liberal Democratic adult spoof on Sesame Street, is the man who got the ball rolling for the current TV-mentality-on-Broadway phase. It was even embraced by the so-called Dean of American Theater Critics, Ben Brantley. And what he says, as they say, goes.

South Park creators Trey Parker and Matt Stone wrote the book and lyrics, therefore, you guessed right: it’s packed with wicked snark, and actually uses that in a way reminiscent of a stand-up comic on a roll. The basic setup is ripe for that. Two young Mormon missionaries—one is All-American handsome, the other overweight and insecure—are plopped into a Ugandan village where no one is able to grasp the theological views of the two young white men. It’s also notable that the wave of homophobic hysteria that has swept Uganda since before it opened on Broadway is not referenced.

If you find that you want to get a fuller picture of Uganda after you’ve seen the show, see the DVD of Call Me Kuchu. If you want more insight into Mormonism and gayness, see the DVDs Latter Days and The Falls. They are a stark contrast to this very successful stage musical. 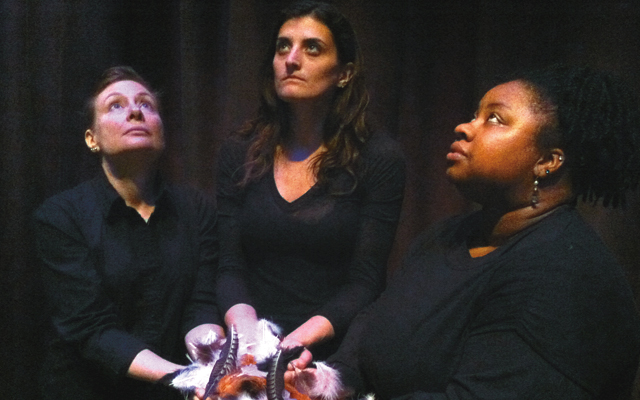 If We Were Birds. Photo courtesy of 20% Theatre Company Twin Cities

20% Theatre Company Twin Cities has really been stepping up their game this year. They gave us a jolting production on competing views of feminism with Rapture, Blister, Burn and now they are digging into issues of war, Greco-Roman myth, classical tragedy, and women as chattel with If We Were Birds by Erin Shields. It’s rather thrilling to see a theater group sink its teeth into such challenging material.

Director Lee Conrads shares that when she first read If We Were Birds, “It felt like the answer to artistic questions I had been pondering a long time. I have an almost evangelical love of Greek Theater and Shields does an excellent job of taking the very elements that often stymie classical theater productions’ accessibility to modern audiences—the chorus, the heightened language, the extended oratories—and making them the most engaging aspects of the play.”

“I have also spent a considerable amount of time thinking about the intersection between art (theater specifically) and social justice. I believe that theater can be a powerful tool for good in the world when we tell stories that deepen our understanding of injustice and force us to sit with difficult problems without offering much in the way of comfort or solutions.”

“I’m also often overwhelmed by the injustice of the world (and my relative powerlessness) and find it tempting to use theater to just shout into the void and release that tension. And I am continually impressed by the ways in which Shields navigates that line. The heightened language, the opportunities to incorporate movement, and the epic/mythic elements from Ovid are incredibly cathartic. But Shields never lets us—as artists as well as audience members—use them as a crutch to face the harsh realities of her play. By interweaving Ovid’s myth with the stories of real women who have endured unimaginable terror as a by-product of war, she forces us to face the fact that the redemption that comes to Philomela is rare outside fiction. We don’t have gods to sew our tongues back in and the restitution we ache for is something we must build for each other as a global community.”

Michele Riml’s comedy catches the wave of middle-age couples living longer, therefore needing to deal with sexual interaction or lack of it, as time goes forward. However, in the case of Alice and Henry, longstanding resentments, defense mechanisms, and assumptions get in the way of the vulnerability necessary for renewed sexual happiness.

The actors at Park Square have been examining that as they have geared up for the area premiere. Charity Jones plays Alice and notes, “After 25 years of marriage, raising three children, managing a career and household, Alice feels a lack of emotional and physical intimacy with her husband. A trip to the gym sparks an existential panic that she is on the ineluctable slide to invisibility in a youth-obsessed culture, questioning not only her attractiveness but her very sense of feeling alive. She wants to try something new in the hope of rediscovering what has been lost.”

John Middleton relates, “At the beginning of the play Henry isn’t interested in ‘improving’ his marriage because he doesn’t think it needs improving. Indeed, with all the other things there are to worry about, he wants and needs their marriage to be something he can count on. Besides, experience has taught him that ‘improvements’ usually mean something that will cost him money, and/or involve long talks about everything he’s doing wrong and needs to change. In short, if it ain’t broke, don’t spend too much money on a ridiculous hotel room.”

Director Mary Finnerty says that many of the artists working on the show have had “visceral reactions to it. One of the designers said she could hear echoes of conversations from her marriage, another said the play touched him and made him cry. I personally felt as though someone had been crawling around my house with a tape recorder, capturing my conversations with my husband. So the dialogue is very real. Sexy Laundry departs from your average relationship story as the characters share their fantasies which grow and free them to either travel separate paths or choose to remain together in a more vital relationship. Anyone in a long term relationship will identify with these characters and their struggle to re-invigorate their relationship.” 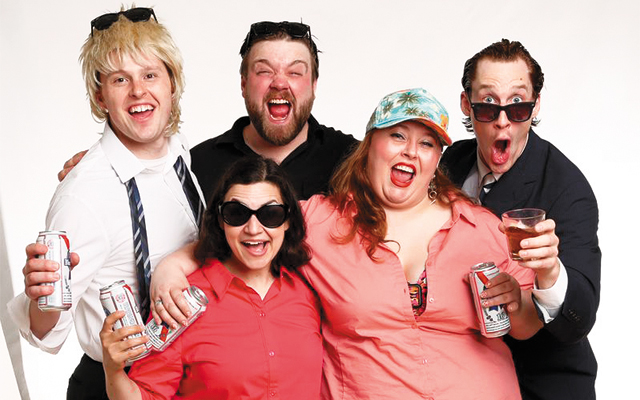 The Wolf of Walmart. Photo by Dani Werner

Comic actor Bobby Gardner is in top form as a Walmart official, or maybe I should say a “thought policeman,” who stands in as the face of a company that, in the spirit of the gospel according to profit, is interested only in dumbing down and distracting its customer base. When public education collapses, Big Brother Walmart steps in and offers history classes that weave in product placement and factually irrelevant advertising for McDonald’s and Sleep Number Beds. The history of the A-Bomb and Martin Luther King, Jr. have nothing to do with these things of course, but it’s the condition on which the corporation will be “benevolent.” Kids are conditioned into consumerism.

The region’s premiere comedy troupe is in new, edgier territory and, though The Wolf of Walmart is not as boisterous as a lot of other Brave New Workshop’s revues, it has its own compelling comic energy. It’s as laugh-out-loud as many of their revues are, but there’s a more serious, more penetrating attitude. Matt Erkel is perfectly creepy as a seasoned Walmart greeter, reminiscent of a cult follower. Taj Ruler and Lauren Anderson create a wild contrast as two women of different generations with very different views of feminism. Tom Reed excels throughout. Peter Guertin’s music draws nicely from different genres, adding ironic touches. The driving force behind this brave new set of vignettes are Caleb and Katy McEwen who have astutely co-directed the piece with a kind of wonderfully low key Orwellian ferocity. They’re clearly showing us the problem of a corporation having the status of a person, a citizen.