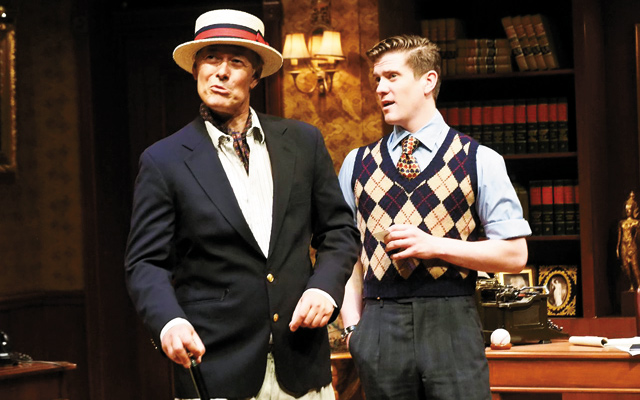 When Godspell premiered Off-Broadway in 1971, it transgressed mainstream Christian ideas of how the Christ story should be sung and portrayed. Though there had certainly been liberal congregations with relaxed atmospheres and folk or rock hymns, it was still beneath the radar of most Americans. If you watch Barabara Walters’s interview with the original cast you sense she knows it could be perceived as blasphemous by some.

On the other hand, given that the Vietnam War had split the nation at that time, many felt that Stephen Schwarz’s music and lyrics and book writer John-Michael Tebelak’s flower-child characterizations of the Gospel of Matthew, rescued and returned Christianity to its call for forgiveness, acceptance, and unconditional love. It made the New Testament what many in those days called “relevant” again. And clearly they had a point, because the musical has endured, and its staple tunes like “Day by Day” and “All Good Gifts” have been integrated into countless worship services.

In his production notes, Schwarz stated that Godspell is about formation of a community. At TRP director Dann Peterson echoes that when he says, “I have chosen to set this production in a theatrical setting: a bare stage, a rehearsal hall, a costume shop, a prop room, a scene shop. It is a community based on a basic set of unversal, enlightened (not exclusively Christian) ideas: compassion, forgiveness, hypocrisy, toleration, and celebration using music, mime, comedy, even slapstick.” (Note that Schwarz would go on to create two other great musicals: Pippin and Wicked.) 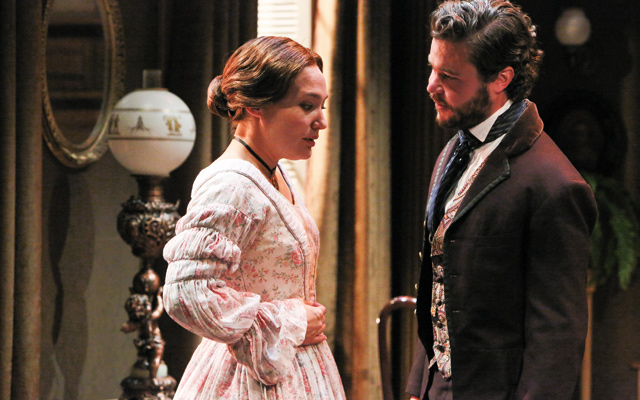 The Heiress. Photo by Michal Daniel

The 1947 drama, The Heiress, is actually set a century earlier in a well-to-do househould on New York’s Washington Square, when the neighborhood was a bastion of American aristocratic conservatism rather than the radical zone it would later become. Playwrights Ruth and Augustus Goetz adapted the Henry James novel, and both book and play merit regard as cultural documents about the definition of middle-class womanhood of the time and place. The similarities to Englishwoman Jane Austen’s world of the previous generation and the England of Julian Fellowes’s Downton Abbey two generations later are notable. American aristocracy emulated and, some say, still does emulate, the traditional British model.

Director and set designer Bain Boehlke has triumphed with a vivid staged realization of what is sometimes called American Victorianism. His actors sculpt the circumscribed physicality of gender-codified people rigidly constrained by perfectionist social standards. Marriage is primarily about the marriage of prestigious family incomes rather than love. That said, The Heiress is very much about the progressive advancement of the concept of love in heterosexual marriage.

Protagonist Catherine Sloper’s dilemma of not knowing whether she is loved for her money or for her self is at the core of the play. Kate Guentzel has given many fine performances but her turn as Catherine is her best performance yet. She mines the pulverized self-esteem of a woman incapable of the coquettishness and small talk that younger women were stringently expected to master. Her doctor father has always humiliated her with unfavorable comparisons to her beautiful and idealized mother, long, long dead. Guentzel makes the hardest heart empathize with the mental/emotional cruelties she has been fated to endure.

Jeffrey Hatcher, the renown playwright/screenwriter, actually plays Dr. Sloper and he’s rightly and perfectly monstrous. The night I attended there was a fair bit of audible audience disgust with the mean-spirited jabs spoken reflexively by the character. And it seemed to come mostly from men!

The excellent John Catron plays Catherine’s suitor, Morris Townsend, with full understanding of the struggle it would have been to be a man of diminished income in love with a woman of superior birth with a dominating father. Sloper automatically sees him as a sprendthrift and a threat. That said, Catron astutely reveals moments when we may doubt Townsend’s genuineness. Bear in mind while watching him that Townsend’s experience is a testimony for why countless financially strapped northeastern men felt compelled to go west.

(Note: Catron and Guentzel are married in real life and were featured among the videos of Illusion Theater’s Love & Marriage which celebrated both gay and straight marriage. Not surprisingly, their mutual chemistry at the Jungle is terrific.)

Jennifer Blagen, Charity Jones, and Wendy Lehr give brilliant portrayals of older women who, though trapped in the same stratified social system, could be considered unwitting subversives against patriarchal authoritarianism. As simple as it sounds, all three characters have at their cores an unflagging sense of fair play and of the primacy of love as a humanizing force. Amelia Cheever’s sumptuous period costumes and Laura Adams’s wigs savvily reinforce the seductive “prettiness” of women’s oppression. I say that as a pure compliment.

It’s the time of year when Park Square Theatre offers a compelling mystery play. Playwright Joseph Goodrich has adapted The Red Box from the fourth book in the Nero Wolfe detective series by Rex Stout. A bizarre and mysterious death sets things in motion and provides an array of colorful characters. Then there is also the matter of another mystery: a red box with something curious in it.

Jim Pounds plays Fritz, the Swiss cook, and Rene Gebert, a French lout. He shares, “They are each important to the story and the atmosphere, but are smaller roles which can be very satisfying to play. I have worked to differentiate them in terms of the registers of their voice and physical mannerisms like posture and bearing. This is my 98th show and I’m very gratified to be back on the Park Square stage.” 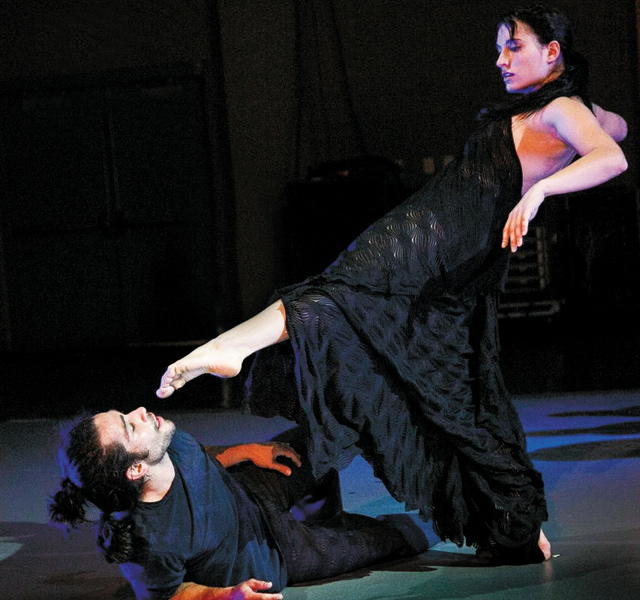 Black Label Movement’s breathtaking dance production of a sinking ore carrier caught in a cataclysmic storm is one of the greatest dance works to have ever come out of the Twin Cities. Choreographer Carl Flink has reprised the 2008 piece to play at the Guthrie’s Dowling Studio. It is yet another sterling example of the Big G showcasing superior work by a local performance group.

Wreck demonstrates Black Label’s signature athletically muscular dance style. The dancers, both men and women, also have to penetrate the intense feelings in the way actors do in plays about characters in dire circumstances. As they desperately flee from compartment to compartment in hopes of getting enough air, you feel as if you are becoming submerged with them.

The Carpenters have been inaccurately stereotyped as a goody-two-shoes sibling duo that didn’t take musical style and lyrics seriously in the way of other major groups like The Beatles, The Rolling Stones, and sundry acid-rock bands of the 1960s and early ’70s. Puh-leez!! But I submit in opposition to that habitualized stereotype that theirs was a soulfully deep connection that was sometimes just too vulnerable and just too optimistic for the nihilistic attitudes of the time.

Like another stunning group in the ’60s, The Seekers, in the ’70s The Carpenters were popular across the generational divide of the time and impelled anyone listening to them to connect to the sensitivities of one’s inner being. Also, like The Seekers and then mega-star Barbra Streisand in both the ’60s and ’70s, The Carpenters’ astronomical sustained popularity is virtually unknown to people today. So many rattle on about The Stones, Bob Dylan, and The Beatles, as if they did and should have defined the time. But what if that were not entirely accurate? (The family-driven The Sound of Music was by far the most successful film of the era. Not The Graduate or The Godfather.)

That’s why I think producer Jim Brickman, who composed that beautiful score for the Louise Hay film, You Can Heal Your Life, is doing us a service with his musical tribute to The Carpenters. (Maybe someone else will do The Seekers.)

Co-creator John Trones shares, “I am a HUGE Carpenters fan, as is our producer, Jim Brickman, which is why he and I decided to write this show. We’d been mulling the idea for years, and five years ago we finally put our ideas to paper, selected the songs, and began the process of having orchestral arrangements created, as this started as an orchestral show. We opened in June of 2011 with the St. Louis Symphony, and since have toured the country playing with some of the finest orchestras in the nation: two sold out nights with Minnesota Orchestra, three sold out nights with the Dallas Symphony, two sold out shows with the Oklahoma City Philharmonic, The St. Louis Symphony, and more. We now have several versions of the show, the orchestral version that we play with orchestras, as well as a live band version that we will be playing at The Old Log, and a smaller ‘tracks’ version of the show ideal for cruise ships and smaller venues.”