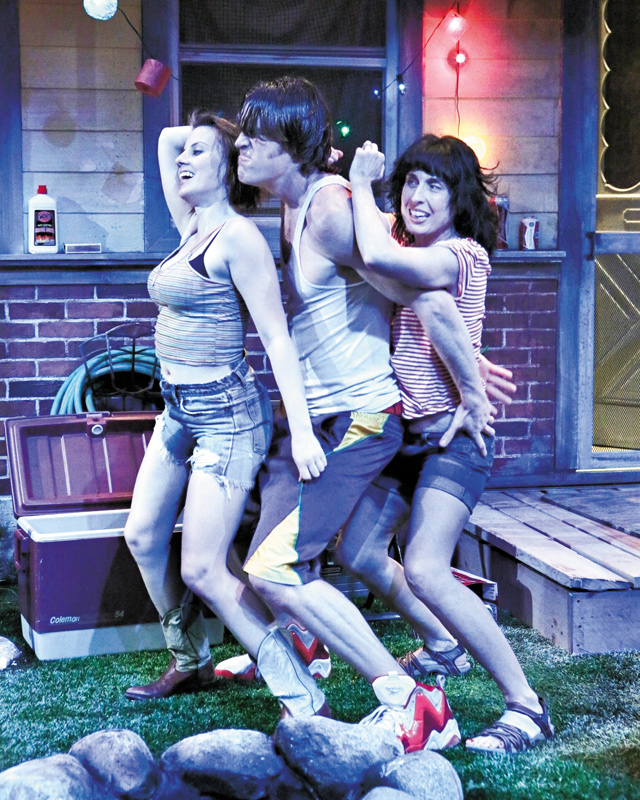 Lisa D’Amour has finally written a first-rate play. Detroit is a searingly frank inquiry into actual economic and addiction patterns that have not only disrupted countless 21st century American lives, but a consideration of how those patterns may have possibly re-circuited society itself. Though the title is Detroit, it is meant to be any first-ring suburb in any mid-sized US city. That’s part of the problem of course: there’s a corporatized sameness to all American suburbs, far more extreme than it was a generation ago.

Angela Timberman and John Middleton, both terrific, play Mary and Ben, an early-middle-aged couple. She works. He’s been laid off and says he’s developing his own business online. D’Amour seems to insuate that the internet aids and abets delusions about economic possibilities and our own inflated abilities. Is she subtly debunking the myth that in America you don’t need anyone? Hearty individualism will always save the day, right?

Next door, a young couple newly moved in, Sharon and Kenny, are played with rowdy abandon and vapidity as the characters wrestle with lingering addiction issues. Anna Sundberg and Tyson Forbes find an oozy sexual chemistry and a sense of danger that at times is downright riveting. Their individualism has been subsumed by the drugs they’ve done and the psycho-physical damage left by that. In addition, a splendidly natural Jay Hornbacher plays a senior citizen supporting role that puts a twist into the works.

Both very different couples form bonds between one another while hanging out in their backyards. Set designer and director Joel Sass makes those ordinary yards captivating and he does something extraordinary with the set that I won’t write about. You have to see it. It’s also some of the seasoned Sass’s best directorial work ever. As for Timberman, it’s the best thing she has done since The Sisters Rosensweig at Park Square and Forbes, his best work since the Ordway’s Cabaret. However, a show that goes well over an hour and a half without an intermission is not reasonable, no matter how wonderful the actors are.

Adam Bock’s stunning satire about unconstitutional surveillance and brutality, The Receptionist, was a big hit for Dark & Stormy Productions at the end of last year. Now they’re presenting another work by the same celebrated gay playwright that looks into that proverbial Dionysian ritual known as the Bachelorette Party just before the wedding.

Actress Sara Marsh shares, “Adam’s play is so cleverly and delightfully deceptive: it appears to simply be a group of girls (played by Tracey Maloney and Adelin Phelps) giving their friend (my character, Marnie) one last night partying in the city before she gets married and settles down in their small town. But for Marnie, the night becomes a sudden and unexpected exploration of love, happiness, needs, and expectations: societal pressures about what love is and what it should look like, the expectations family and friends have of us—whether they’re aware of it or not—to make certain life decisions, and the intense pressure we put on ourselves to please others, even if it may come at the cost of our own personal happiness.”

“Until this night in the city, Marnie hasn’t confronted any of these issues consciously, so now that her wedding is imminent and she’s in an inebriated state, it doesn’t take much of a catalyst (a cute, kind guy named Frank, played by Kris L. Nelson) to get her gears turning. And though Marnie’s story provides the most consistent through-line and backbone of the show, the play is far more than just her pre-wedding excitement and questioning. For each of the characters, it’s an exploration and sometimes realization of what love and commitment are, how they are different than what we may have thought, and what they truly mean. What do we owe ourselves? How does that impact what we feel we owe others? Where do those things intersect? Do they? What is love, what is happiness, and are they even related? And what do you hold onto and what do you sacrifice to have one or the other or both, what’s the cost? We (all) continue to ask ourselves these questions throughout our 20s, 30s, 40s, 50s, and on. There’s no easy answer because the definition and formula for love and happiness is constantly changing. Gay, straight, wealthy, struggling, older, younger; this play speaks to everyone, because the desire for—and struggle to find—both love and happiness is constant and universal.”

Director Bill McCallum adds, “Adam’s choice to place these three brides-to-be in a strange and dangerous setting, under the influence of truth-inducing alcohol, provides a fabulous context for the exploration of issues that we all face in our lives. The play is not prescriptive. It doesn’t offer any answers. But it does pose many interesting questions about love and loneliness and honesty and friendship and societal expectations, and how our need for connection influences the choices we make in our lives.” 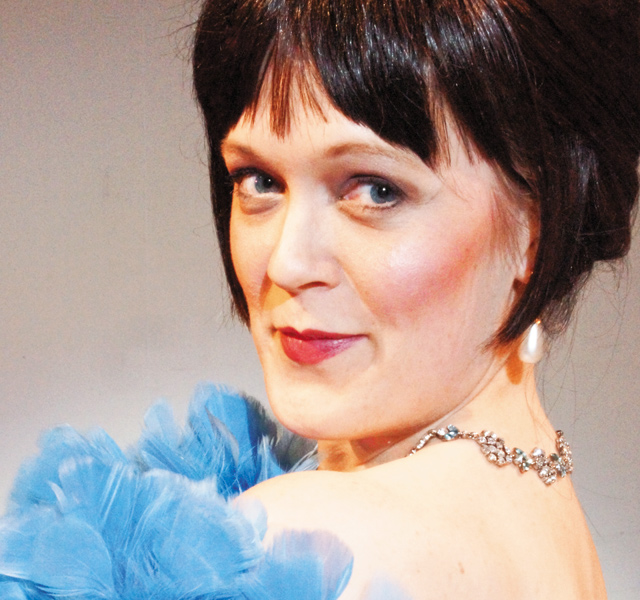 Gypsy is one of the towering musicals of American theater. But then how could it not be with Jule Styne as its composer, Stephen Sondheim as its lyricist, and master gay playwright and screenwriter, Arthur Laurents as its book writer.

The true life character of Rose is the mother of striptease artist, Gypsy Rose Lee. Sally Ann Wright plays Rose at Bloomington Civic and you may recall her marvelous performance there in Sondheim’s Follies a while back. (In case you didn’t know, BCT is one of the best local producers of musical theater and Sondheim is their forte.) Wright, as one would expect, researched her role diligently. She relates “a romp with the hotel manager in the script is funny and charming, whereas in real life she actually threw a manager from a hotel window. She was ruthless, cunning, and, when she wanted to, (could be) charming. She made her girls lie about their ages to the point that they honestly didn’t know how old they were! Time after time, she drove husbands and lovers away simply because she was exhausting and drained the people around her of anything she could get from them.”

“I don’t think Rose had an honest relationship in her life. She simply didn’t have the capacity for it. She had many relationships with both men and women, none of them successful. But she raised two stars. It’s an interesting conundrum, isn’t it? When Gypsy was diagnosed with lung cancer in 1969 she said to her sister June, ‘This is my present, you know, my present from mother.’ You  see, when Rose died of colon cancer in 1954 her final words to Gypsy were, ‘wherever you go I’ll be right there…When you get your own personal kick in the ass, just  remember, it’s a present from me to you.'”

Theater Coup d’Etat is staging Naomi Wallace’s One Flea Spare. Director James Napoleon Stone relates that it “uses the 1665 (bubonic) plague of London to serve as a backdrop for people stripped of all first-world amenities we use to define ourselves even today, such as wealth, class, and the power associated with them. Now forced to rely on one’s own morals and intuition to survive, we see the innate power of human empathy and sexuality either honored or disregarded. Sexuality comes forth as one of the innate characteristics that makes us human, that gives us worth.”

London was a center of plague activity throughout the Middle Ages and into the Renaissance. However, for all that horror, the city still managed to be a vibrant, bawdy, and consummate artistic center. Wallace’s play will be worth catching to learn something about how to let life and living take center stage in the face of grave illness rather than let it define who you are with ‘terminal’ limitations. One has to wonder how, despite the plague outbreaks, London would always rise above the paranoia and carry on! 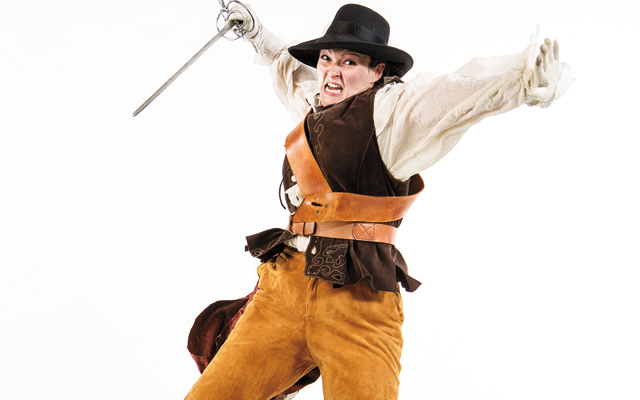 Walking Shadow Theatre Company plays the Guthrie’s Dowling Studio again. Company Man John Heimbuch is a man with a great instinct for European cultural history since the Renaissance, not to mention gender roles. He has re-imagined Alexandre Dumas’ classic novel, first serialized in 1844, for the stage. He shares “when I began this adaptation of The Three Musketeers, I was surprised by the main characters’ cavalier approach to honor and privilege. Despite their heroic bravura, these nobly born men were opportunistic, deceitful, sexually duplicitous, gold-digging, and physically aggressive in order to achieve their aims. Naturally, they’re young. The musketeers are in their early 20s, and d’Artagnan only nineteen, so no wonder they act with the bold urgency of youth. But what I find most interesting is that their greatest threat doesn’t come from other men, but from an opportunistic woman. The musketeers’ main adversary, Milady de Winter, is the protoypical femme fatale: dangerous, intelligent, attractive, mysterious, empowered. She represents a perfect mirror to their own questionable moral privilege.”