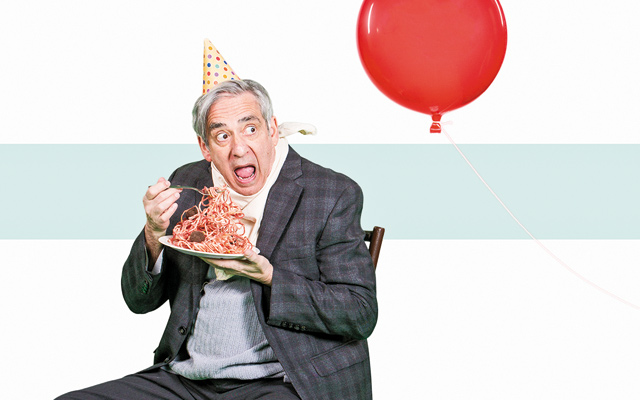 Robert Dorfman is renowned for his Broadway credits but in Minneapolis he has his own significance. In the ’80s he played the Guthrie in historic productions of The Marriage of Figaro and Candide; in recent years he’s been seen as Shylock in the big-selling The Merchant of Venice and, quite recently, as the Father of Psychoanalysis himself in Freud’s Last Session. An exquisite actor with fine sensibilities, you can now catch him at a different venue—the Children’s Theatre’s Cargill space.

Dorfman plays a grumpy and lonely man who has to celebrate his birthday all by himself in Balloonacy. However, it’s as if the gods and goddesses have noticed his alienation by sending a balloon that pops up in his little apartment and has an odd-but-hilarious way of hiding out in spaces there, like the microwave or a broom closet. The balloon has a personality all its own. It’s one of those shows where you often ask yourself: how did they do that?

This short little piece appeals to young children but older folks will be enchanted, too. Writer Barry Kornhauser clearly draws from the gangly physical aesthetic of Jacques Tati and from Albert Lamorisse’s classic 1956 film, The Red Balloon. However, where the film’s protagonist is a little boy, we now have a man who seems to be well into his 50s. Is this the little boy grown up? The splendid Dorfman made me wonder about that.

The slick and sensual Blue Man Group inventively creates performance art that blends amphibiously kinetic physical movement with imaginative use of objects for making all sorts of sounds. A pipe is a drum. Cereal isn’t eaten but to make a noise. Steel, marbles, and dental floss are part of the soundscape. Though BMG originated in a small venue, it has a wonderfully expansive feel when it unfolds in large venues like the Ordway. And let’s face it, those playful performers in those tight-fitting body suits are very, very easy on the eyes, not to mention, ingeniously talented to boot! 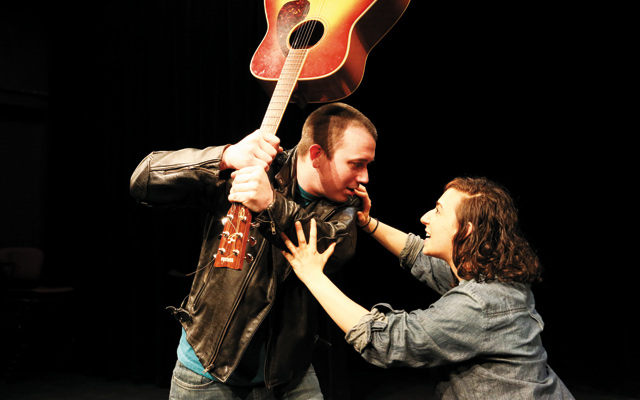 Jeannine Coulombe is maturing into a playwright who has a truly distinct regional voice. In The Mill, which was named one of Lavender‘s Top Ten productions two years ago, she searingly examines issues of labor and race relations on Minnesota’s Iron Range. With her newest, Homegrown, produced by Workhaus Collective, she goes to Michigan’s Upper Peninsula where she examines the problem of being an artist in a rural area where support is slim to nonexistent.

Coulombe says she “addresses this difficulty generationally, how the impulse to create, imagine, express yourself artistically is squashed, diverted, silenced not only for the mother in Homegrown but also in a myriad of ways for her children as well. The play looks at how this is done mainly through a lack of access; the isolation of not having a place to express your art, a community to help nurture it, the space to understand your creative impulse; and the lack of resources to find this space and community due, simply, to a lack of money. Without resources, it is difficult to give voice to the creative impulse, let alone a way to cultivate it. I think the main thing is that to be an artist, especially when you are first trying to figure it out, you have to have the space, time, and resources to fail. You need the privilege to fail. This family does not have that privilege. It looks at how that lack of privilege gives rise to subverting that creative impulse into a whole slew of vices and what you do when the vices run out. It has nothing to do with a lack of talent, but who would these characters be if they had the privilege to fail and the space, time, and resources to give voice to their creativity? What is lost in the world when only privilege allows access to creative expression?” 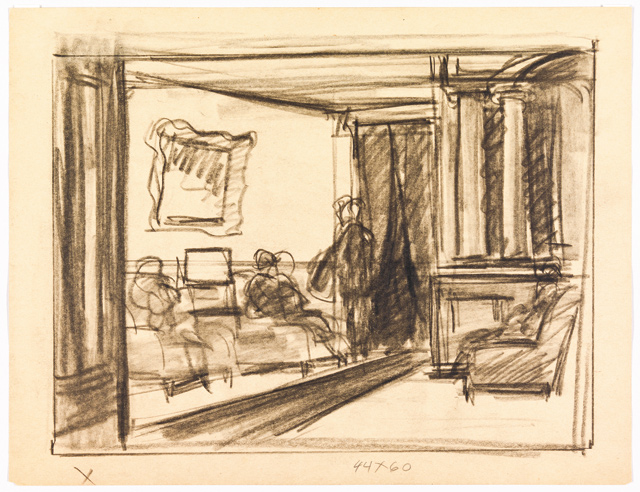 Architecture and the human form are reflected in a profoundly distinct way by Edward Hopper (1882-1967). A Whitney Museum retrospective at the Walker Art Center offers a mesmerizing look into the man’s seemingly methodical creative process. He wrote very brief descriptions of what you see in his paintings in sketches of those paintings. You’ll see a combination of a rough image of the final piece and such descriptions around it. There are also studies of decontextualized particulars, such as a pair of arms, that he was likely honing so that when the arms actually appear in the final picture, they look believable.

Hopper’s wife, Jo, is the primary subject of many Hopper pieces, including his nudes, some of which are displayed in one of the galleries. Like almost all of the people in Hopper paintings, there seems to be a vacant look in the faces that hints at society, workplace pressures, bricks, and mortar draining humanity of passion and core identity. Men in business attire and the sensual curves of the women reflect the tension between rigid male role-playing and the natural essence that women represent. The Walker’s own famous Office at Night is a stellar example.

There’s something quintessentially American here, whether you come from a city or a small town. Though his buildings are largely out of New York City’s more industrial districts, the look is quite similar to the brick structures we see in small town America on Main Streets (and nearby them) even now, as well as warehouse and industrial districts that are still in evidence near the downtowns of both Twin Cities. Another thing that Hopper reminds one of is Old Hollywood’s Film Noir—clearly he was an aesthetic influence. He seems to hint at a similar cynicism, not in black and white, however; but in haunting faded color. A gorgeous exhibit indeed. 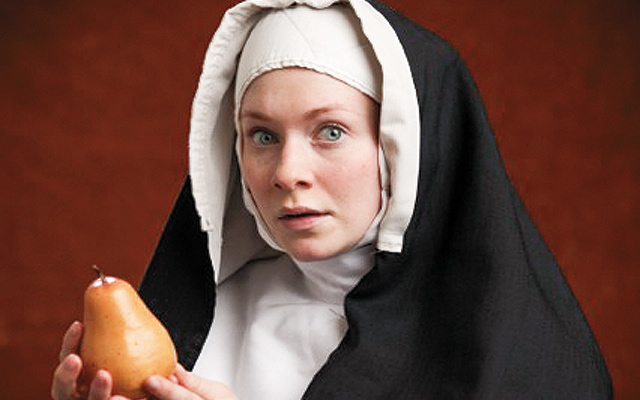 Silkworms (a nun play)
Through May 11
The Woman’s Club of Minneapolis, 410 Oak Grove, Mpls.
Tickets at door or www.theatreunbound.org

Theatre Unbound, the region’s premiere women’s issues theater group, has a knack for tapping into historical themes and their current show glories in that. Based on Craig A. Monson’s learned Nuns Behaving Badly, Isabel Nelson is lead writer for a collaboration inspired by the book’s noted look into witchcraft, arson, sexual transgression, physical abuse, and male domination.

Anne Bertram has been assisting Nelson. She says Monson’s book “is a great deal more scholarly than the title suggests. We came up with a few different story lines inspired by the historical episodes, and the cast built a series of images based on each one. The whole group felt pretty strongly that the most compelling story was the one closest to the history Monson relates. Starting from that outline, the cast has been building and discussing different options for the scenes. From the various proposals, Isabel and I select the elements that feel strongest. I draft the text that will be spoken. We discuss, decide, and rescind decisions a lot—we are building the process, as well as the show, as we go along.”

When playwright Bertolt Brecht and composer Kurt Weill left Germany after Hitler’s fateful 1933 power grab, their 1928 Threepenny Opera with its beggars and political satire surely raised red flags and swastikas as the Nazis began to single out those who ideologically stood against their agenda. It’s hard to believe it’s been 15 years since Frank Theatre produced the show. And the revival will be all the more interesting given that Frank and director Wendy Knox have done more Brecht shows since then. So expect an even deeper cut on the musical that best known for its tune Mack the Knife. It’s also a designer’s dream.

Costume designer Kathy Kohl shares that her approach was guided “by certain givens: I needed to differentiate it from my 1999 Threepenny Opera design; it should reflect today’s eclectic street look, including street pop, so there are flashes of color amidst the faded neutrals; a limited budget and a large cast. The 1999 design looked back to the 19th century, with 20th century touches. In the 2014 version, we’re firmly set post-millenium, with a notable nod to the 18th century of John Gay’s original take, The Beggar’s Opera. These particular beggars are collectors and Joe Stanley’s stunning prop warehouse set design opened the door wide for me to turn their costumes into mini-collections of pieced-together recycled clothing and found items.”

She adds, “This feeds nicely into that small budget. I have pulled from my own and Frank’s stock for a no-cost source of a pant leg here, a sleeve turned into a hat there, a belt cut down to a clerical collar. This is my favorite recipe for a costume: gather what’s on hand , chop into little pieces, and muddle together.”