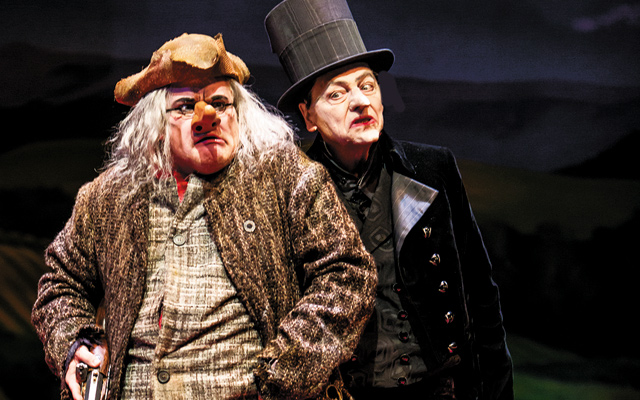 The Scarecrow and His Servant. Photo by Dan Norman

The Scarecrow and His Servant. Photo by Dan Norman

You may know Philip Pullman for His Dark Materials books and The Golden Compass which was made into a popular Nicole Kidman-Daniel Craig film. However, his lesser known, but still beloved book, The Scarecrow and His Servant, has been adapted into a terrific stage production by the Twin Cities’ most successful playwright, Jeffrey Hatcher. And if you think I’m overstating that, just have a look sometime at how many Hatcher plays are parts of theater seasons throughout the English-speaking world and you’ll get my point.

Hatcher’s version, directed by Peter Brosius with stage movement by Brian Sostek, emanates the commedia dell’ arte style of stock characters from traveling acting troupes of Old Europe – Italy in particular – as well as echoes of Victorian melodrama. Though the play is a clear cut polemic against eco-terrorism by corporations in a war-driven economy, its quirky characters are located somewhere in the vaguely distant past. This may not soften the political message, but it makes it easier for conservatives to swallow. Nostalgia subversively melds with radicalism.

The scarecrow protagonist, embodied in a charmingly gangly and edifyingly spoken performance by the great Dean Holt, brings to mind Don Quixote and his glorious quest to end wrong and oppression wherever he goes. He walks on stilts throughout. But Scarecrow has a big advantage. He’s not really alive so he can’t be killed. However, he is tethered to a youth -or vice versa- named Jack (an effervescent Brandon Brooks) who is mortal and on the run from corrupt law enforcement. He is Quixote’s Sancho Panza sidekick. But Jack has a major weakness: he has to eat. Something Scarecrow never has to worry about.

This pair of misfits bond in adversity and get to do wondrous things like take part in a theatrical production and see the world. Sadly, however, the hot pursuit by the law and the never ending wars almost break Jack’s spirit. But this is where Scarecrow’s unique and constantly upbeat perspective figures into creating solutions to what seem like life’s insurmountable problems. Just when everything seems hopeless the most unlikely and creative solutions spirit forth.

This inspiring production is crisply acted by a crackling ensemble that plays multiple characters ranging from crows to desperately hungry and looting soldiers. Gerald Drake beguiles as a cryptic spokesman for corporate concerns. He looks like an aging version of one of the thugs in the Kubrick classic, A Clockwork Orange. In fact, some of the noses the ensemble wears brings that very ‘non-children’s’ film to mind. Splendidly creepy to be sure.

Moreover, The Scarecrow and His Servant  is worth catching just for the set. G.W. Mercier’s design is a work of art in itself, enhancing the script brilliantly. It does not detract at all. It’s as if the characters were destined to inhabit that set. A stand alone stage is at center with rural imagery in the background. When the curtain is open various pictorials are seen and switched throughout. It’s reminiscent of a Magritte painting. In addition, Mercier designed the eclectic but unified costumes.

This year you can expect some fascinating GLBT-centered films and finally, the internet and electronic media are really and truly scrutinized. Long overdue but how nice that it’s happening. InRealLife looks into both GLBT issues and internet omnisicience. Land of Storms from Hungary is a hot and steamy but serious look at the love between a soccer player and two young masculine rural men. In Tom at the Farm from France a man is shut out of the grieving process when the man he loves dies. The Dog fleshes out that very sensational true story dramatized in the classic ’70s film, Dog Day Afternoon, in which a bank robbery occurred in the service of financing a sex change operation.

Web Junkie examines the possibility of internet addiction as a clinical disorder. Google & the World Brain warns of Google Corporation’s dubious quest to scan every book on the planet. Though he was not queer, Ingmar Bergman’s films broke ground in the realm of gender and sexuality. The documentary, Trespassing Bergman, contains interviews with some superlative directors: Michael Haneke, Alejandro Gonzalez Inarritu, Yimou Zhang, Alexander Payne, Woody Allen, Francis Ford Coppola, Lars Von Trier, Ang Lee, and Claire Denis. Of course, in his time, Bergman was hailed as the great ‘women’s director’, so you are bound to hear fascinating comments from Isabella Rosellini, Harriet Anderson (a Bergman regular player), Laura Dern, Holly Hunter, and Pernilla August who played the nanny in Bergman’s last and greatest theatrical feature, Fanny and Alexander. 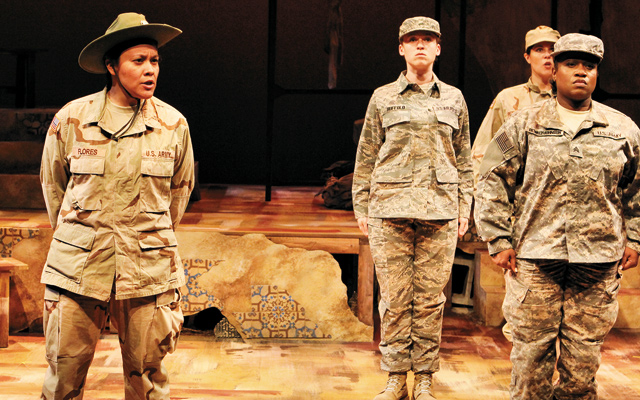 Tim O’Brien, the acclaimed Vietnam era author, wrote the short story collection The Things We Carried is based on. The splendid Stephen D’Ambrose gives a moving solo performance. He benefits from Jim Stowell’s stage adaptation which contains graphic imagery of war violence and the effects that come out of that: mutilated bodies, shattered souls. What’s particularly notable about this play coming out now is that it flies in the face of the way Americans have come to treat violence as just an ordinary old thing. Aside from the continual regurgitation of adolescent male action flicks, porn, and video games, the theater itself has become an outpost of destructive adolescent immaturity. The Book of Mormon, perhaps the most popular current Big Musical, shamelessly makes fun of gruesome events of imperialism, war and rape and disturbingly, audiences, and worse yet, critics everywhere have praised it! Stowell’s sensibility is the opposite. I call him noble.

The Things We Carried runs in repertory with Lonely Soldiers: Women at War in Iraq by Helen Benedict. It is drawn from interviews of eight women who have served in the military. The treatment of women in battle and back at the base have come under scrutiny since the Bush/Cheney years. Here’s a play that can help us put some perspective on that, and perhaps some solutions.

Clarence Darrow (1857-1938) looms as a forerunner of modern progressive movements. Gay history knows him for his controversial defense of child killers, Leopold and Loeb, two young wealthy male lovers of wealth who brutally killed a boy for pure sport. He also defended American Railway Union leader Eugene Debs. Of course, Darrow is best known for the Scopes ‘Monkey’ Trial in Tennessee where he defended the right to teach Darwin’s theory of evolution.

Actor/writer Gary Anderson will reprise his acclaimed solo play, which recently played Off-Broadway. The Illusion run of Naked Darrow will have various performances that will be followed by panels of legal experts to talk about the Darrow legacy. Two of the big issues the piece deals with are racism and the death penalty. So if those are issues important to you, you will find Naked Darrow and its panels to be a solid historical reference regarding those issues. And it’s always good to get a historical perspective in our time of now, now, now!

Something nice to report here: Melanie Wehrmacher has joined the Brave New Workshop ensemble and she fits in nicely. Their current revue doesn’t bear much resemblance to the Tennessee Williams classic its title derives from but given that it opened during the fiercest winter in memory, it’s perfectly suitable. However, the show does spoof the frustrated sexuality that one can always count on in a Williams play.

Here are some examples. An Edina couple hemmed in by sexual semi-consciousness lets go of their inhibitions. A mama penguin gets tired of (as in ‘no longer attracted to’) papa, leaving baby penguin in the cold. You guessed it – Taj Ruler is as hilarious as ever as baby penguin. A sketch called The Joy of Baking shows the sexy side of pie-making. And Andy Hilbrands plays a cat who is just a little too possessive of his owner. His movement is oh-so-sensuously feline.

However, the show’s best vignette is also the funniest portrayal actor Matt Erkel has ever given in a BNW revue. His character is Nikolai Gynecolovich, the Russian Father of Gynecology. It is his life’s crusade to make sure people, especially high school students -male and female- have a holy appreciation of female sexuality. The reaction of the students and the teacher are priceless as he waxes profound on his field of interest. High-larious!