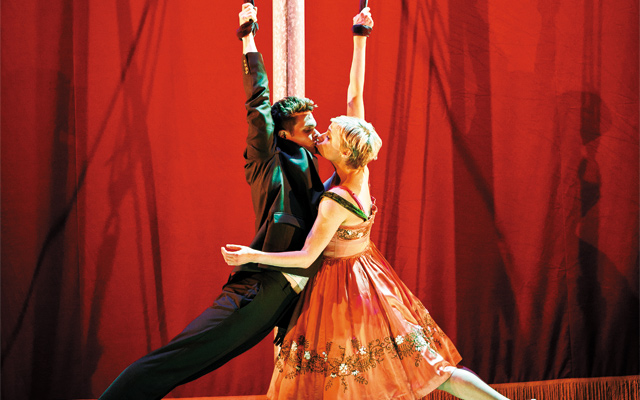 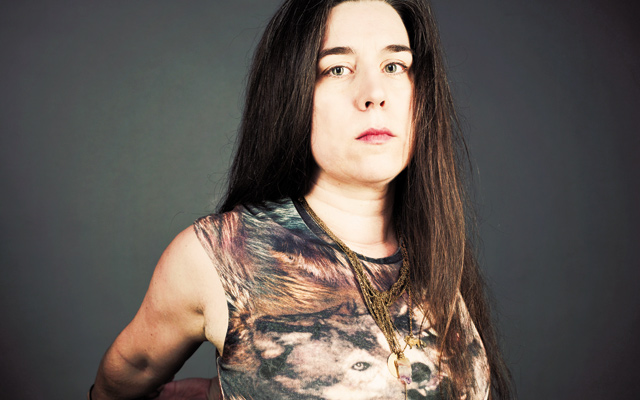 Just a brief note before I proceed. The Walker Art Center was a place that was very special and dear to the late great ‘Joan of Art,’ Joan Mondale. When recognizing what a mecca the Twin Cities are, you must acknowledge her for being an engine in creating and developing the Twin Cities as a kind of Athens of the North, a mecca for artistry and education. She was central in the growth and development of the Walker Art Center. In the years of Mrs. Mondale’s life, the Walker expanded its programming so it could reflect global trends that otherwise would not have ever been available to the state and the region, as well as being inclusive of smaller area arts organizations and commissions that combine local artists and those from beyond the region. What we could call contemporary tradition and innovation have made the Walker the most important art center between Chicago and the west coast.

luciana achugar’s Otro Teatro is an example of such partnerships. Senior Performing Arts Curator Philip Bither relates: “Traversing the lines between human and animal, performance and ritual, past and future, spectator and participant, luciana has created a distinctive and powerful brand of performance theater, one that utilizes the human body and the human voice as core elements.  achugar’s comical, virtuosic Molton Substance was one of the standout hits of the recent Zenon’s 30th Anniversary season and it led them to want to work together again.  Our upcoming world premier Otro Teatro, takes the fantastic Zenon dancers–and other key members of our local dance and performance communities–as well as her own NYC company members into previously uncharted, provocative territories of intensity and interactivity. It is clear to me why so many on the contemporary New York dance scene consider luciana to be one of the under-recognized iconoclasts of our time.”

The Dust Bowl that occurred during the Great Depression of the 1930s was a natural cataclysm that had dreadful human and economic consequences. When mechanized farming techniques took root in the previous decade, five million acres that had never been farmed were plowed. Overproduction of wheat and not planting drought-resistant grasses led to low market prices, erosion, and the loss of topsoil. Spectacular dust storms destroyed property as well as injured and killed people and livestock.

The Transatlantic Love Affair troupe has revived their compelling 2012 Minnesota Fringe Festival smash, Ashland, which observes the toll the Dust Bowl took. This beguiling production has been conceived and directed by Diogo Lopes. His ensemble of actors physicalize people of the time and use their voices to portray the sounds of nature. Since it’s part of Illusion Theater’s Lights Up series, this Dust Bowl mini-epic has been expanded with scenes that dig deeper into both the ecological and economic elements that traumatized the central part of the United States. Not to be missed.

If you ever get sick of the way national media talkers from Ed Schulz on the Left to any number of far-out cats on the Right wax sentimental about the American ‘Heartland,’ then Alexander Payne’s new comic masterwork, Nebraska, is the film for you. The splendid Bruce Dern plays Woody Grant, a partially senile senior citizen who thinks he has won a Publisher’s Clearinghouse type of sweepstakes. So he starts walking to Lincoln, Nebraska, where the swindler’s office is located to collect his fortune. His son, David, played lovingly by Will Forte, tries to stop him, but when he sees he cannot break through his father’s delusion, being the sweetheart that he is, he takes off work and drives him there.

En route, they stop in Hawthorne, Nebraska, where Woody grew up. The place is economically tattered and Woody’s relatives are absurdly mediocre. Payne’s wonderfully goofy cast ruthlessly reveals the pettiness, jealousy, and disinterest in the world around them, incapacity for compassion, and obsession with money that are too often politely ignored when we chat about small town and rural America. (I can hear Ed Schulz and Rush Limbaugh puffing up as I write this.)  What’s also interesting is that the film doesn’t even have to even peek into issues like meth, local political corruption, or religious extremities–tried and true staples of small town and rural America–to give us piercing satire. It questions the core values of what’s thought of as the salt-of-the-earth Midwesterner.

Bob Nelson’s brilliant original script contains one of the brassiest characters to come along in a film in quite a while: Woody’s graphically verbal wife, Kate, is given a knockout portrayal worthy of an Oscar by June Squibb. She turns any stereotypes about seniors on their head like few characters you’ve ever seen.

Of course, there are awesome people in the Heartland! No doubt about it! But sentimentalizing them isn’t honoring them. And satirizing the mediocrities who so often make the awesome rural and small town folks’ lives hell is a good thing. Two of Woody’s couch potato nephews, played perfectly by Tim Driscoll and Devin Ratray, exemplify the young American man who lives in a little boy’s world with little boy misinterpretations of how things work. They’re priceless in a disgusting kind of way. Moreover, Phedon Papamichael’s black and white cinematography of the Great Plains and human interaction on them is an awe-inspiring vision reminiscent of Hud and The Last Picture Show. Mark Orton’s music is sublime. 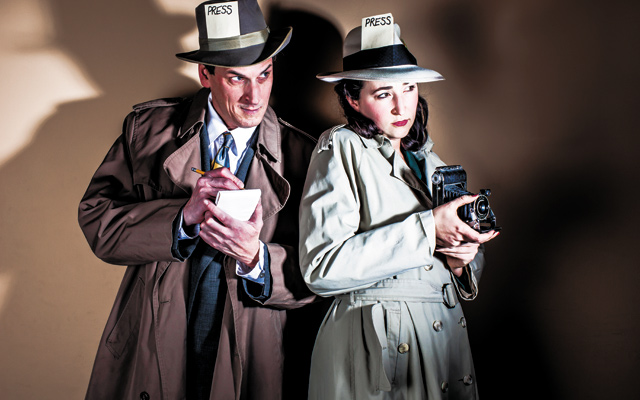 Director Craig Johnson reflects, “When John Middleton brought his script, Prints, to Torch Theater, artistic director Stacia Rice and I immediately recognized in it the same qualities that John brings to his acting–sly wit, great theater smarts, a quiet passion lurking beneath the surface, and a strong moral vision. Prints combines local history like the Minnesota kidnapping of William Hamm, Jr. in 1933 with real-life gangsters, Creepy Karpis and Ma Barker, plus the young J. Edgar Hoover and a couple of intrepid investigative reporters in hot pursuit. I loved how John spins the tale with the snap and breathless pace of great Hollywood movies of the period like The Thin Man and The Front Page. It’s the first time Torch has produced a new play, and we’re excited to have it be Prints.”

With all the Depression Era crime references, you can imagine that Middleton has been influenced by film noir. He shares, “As a kid growing up in Wisconsin I absorbed a lot of terrible advice from those movies about smoking cigarettes and drinking whiskey and facing dangerous situations with a smart remark. But, more constructively, I grew up loving the way grownups talked in those films. It was funny and muscular and absurd and a little dangerous. It wasn’t proper. It was the language of crooked cops and goodhearted crooks, prostitutes and bums, dock workers, taxi drivers, bartenders, lushes, and losers. But in the hands of people like Dashiell Hammet and Raymond Chandler and in the mouths of people like Humphrey Bogart and Myrna Loy, it was music. It was a thrilling jumble–energetic, playful, and very American.”

The arrival of the Spanish in Mexico is one of the most consequential events in history. Colossal on a scale comparable to the sack of Troy or the bombing of Hiroshima. When Hernando Cortes and his conquistadors arrived, many Aztecs thought he was Quetzalcoatl, the Sun Serpent superbeing who would free them from the tyranny of Montezuma. A classic case of rejecting the devil you know for the devil you don’t know. Playwright Jose Cruz Gonzalez tells the story through the eyes of two brothers who take opposing sides.

Director Rachel Bowditch explains that “The Sun Serpent is the result of a two-year devising process from idea to script. Embedded within the macro story of the conquest is the intimate story of a boy and his brother who are forced to take sides–one brother joining against the Aztecs and the other fighting to preserve the memory of his ancestors and culture that was being brutally erased. The unique challenge of staging such an epic tale is to create a magical theatrical universe where the children are transported into another world.”

Before King Arthur, there was Tristan. His adulterous love for Yseult and the cuckolding of her husband, King Mark, is one of the towering medieval epic stories. However, there are so many versions of the story that it’s difficult to know just what the original narrative was in specifics. The love potion the lovers ingest, in some versions, lasts their lifetimes and, in others, it wears off over time. So it seems a likely choice for adaptation by the funloving postmodern Kneehigh troupe from Great Britain whose international tour of their adaptation now plays the Guthrie.

Kneehigh loves to fiddle around with interpretations of classic stories. For example, their spin on the Cornwall tale gives us the music of Nick Cave, aerial antics, and binoculars. In recent years, Kneehigh played the Guthrie with a dizzying take on Noel Coward’s Brief Encounter. Local audiences and critics loved it and Tristan & Yseult promises to be as good or better. Reviews in the UK have been borderline raves. Their presence at the Guthrie is a great example of the Big G’s commitment to making excellent work from overseas available as part of the regular season.