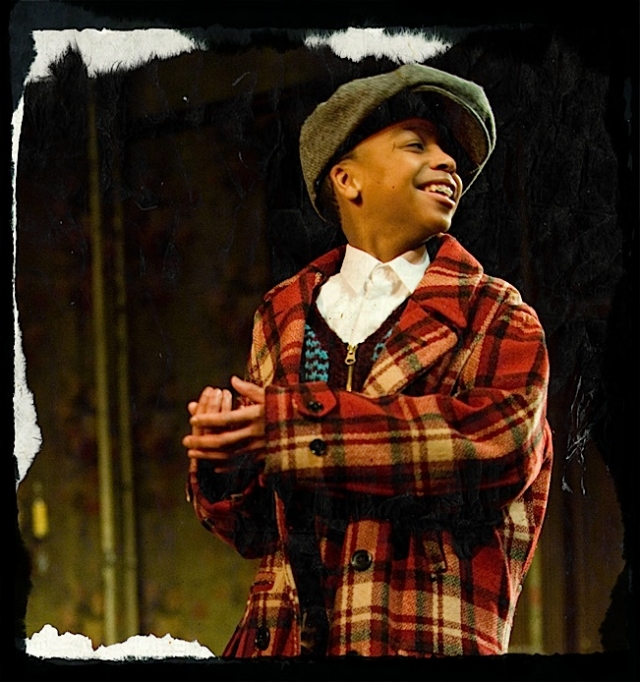 The Ballad of Emmett Till. Photo by Ann Marsden

In August 1955, on a visit to relatives in Mississippi, 14-year-old Emmett Till made a harmless expression of attraction to a white female store clerk and for that was ganged up on by white townsmen and beaten sadistically, shot in the head, and dragged to the Tallahatchie River where he was dumped after being tied to a metal fan. The corpse was returned to Chicago, Emmett’s home town, where his mother, Mamie, permitted an open casket funeral. For five days mourners were able to see evidence on the child’s body of the senseless horrors he endured. Ifa Bayeza’s play, The Ballad of Emmett Till, is recommended to anyone who wants to genuinely commemorate Black History Month. It is produced by the nation’s flagship African American theatre, the Penumbra, founded by Lou Bellamy.

Penumbra Education Director Sarah Bellamy shares, “My father and I chose to stage The Ballad of Emmett Till in the wake of the Trayvon Martin shooting. We wanted audiences to have a space to talk about it and talk about how it is connected to a history of violence against black boys. We will not pull punches. We will not make the tragedy of this child’s death easy for you. We will not stage gratuitous violence. We will not erase the flagrant racism of the environment that justified his murder. We will celebrate, with heavy hearts, the dignity and grace of a child who paid the price for our nation’s tolerance of hatred and discrimination.”

Director Talvin Wilks notes, “Emmett Till’s story is more than the injustice done to a 14-year-old boy; it is an indictment of an entire culture, an era of suppression and bigotry. Even in the crime itself were many hands – hands that pulled the trigger, hands that cracked the whip, hands that pistol whipped, hands that washed blood from the truck, hands that burned his clothes, hands that threw away his shoes because they wouldn’t burn, hands that tied a fan around his neck, hands that threw his body in the Tallahatchie River, multiple hands.” 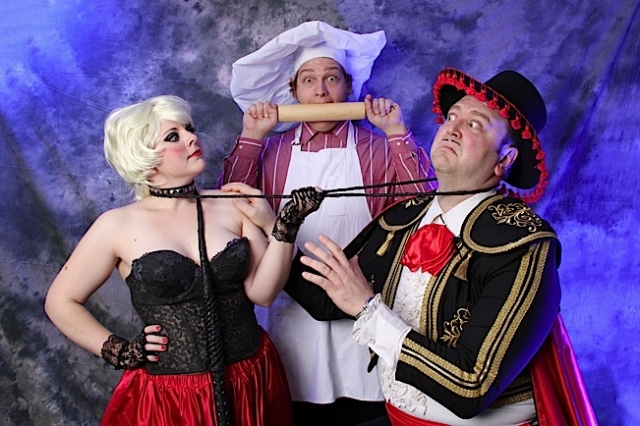 Minneapolis Musical Theatre presented Convenience, a Gregg Coffin musical, eight years ago. Now they are presenting another Coffin piece titled Five Course Love. Director Steven Meerdink points out that “one of the unique aspects of Coffin’s work is that he writes the entire show: script, music, and lyrics. He has a knack for breathing musical theatre life into everyday moments and life-changing events. His uncanny ability to always find the humor in these circumstances makes it easy for us to relate to so many of his scenarios. If you think you’ve had your share of weird dates and unusual relationships, the five entangled encounters you will witness in Five Course Love will probably have you beat. Or they run a close second.”

Coffin’s musical continues the relationship between MMT and the Hennepin Theatre Trust. The entire show is played by three actors: Ryan McGuire Grimes, Joseph Pyfferoen, and Amanda Weis. There is a gay theme presented in the German restaurant vignette. 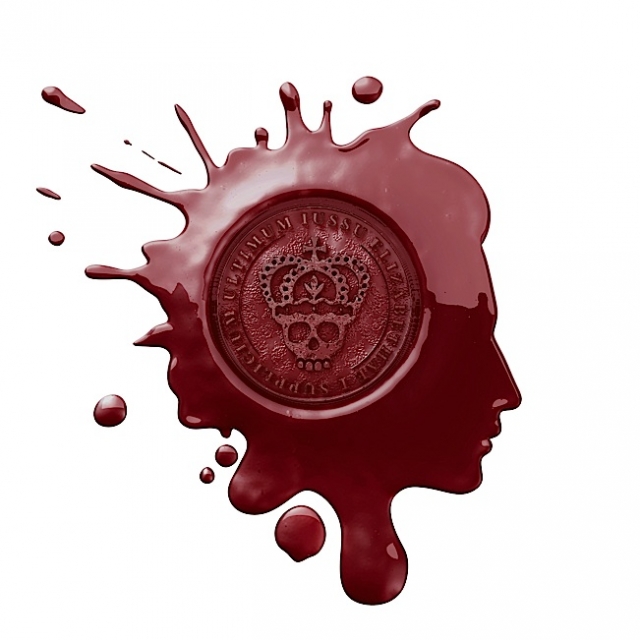 Walking Shadow Theatre is known for its superb historical productions. A few years ago director John Heimbuch wowed audiences with his staging of Compleat Female Stage Beauty which looked at the issue of men playing women in the years after the English Civil War. He now turns his sure hand to surely the most fabled conflict between two women in Western history: Queen Elizabeth I v. Mary (Stuart), Queen of Scots aka Mary of Scotland.

He informs that “in the mid 1500s, when Mary Stuart was ousted by her parliament, the Catholic queen of Scotland fled south to seek the protection of her cousin, Elizabeth Tudor, the Protestant queen of England. Yet, because of Mary’s standing claim to the throne of England, Elizabeth responded by jailing her for more than a decade. When a plot against Elizabeth’s life was uncovered in 1586, her ministers took the opportunity to indict Mary for the crime – leading to Mary Stuart’s execution on February 8, 1587.”

It was over two centuries later, in 1800, that German playwright Friedrich Schiller adapted the Mary Stuart’s story for the stage. Heimbuch observes “Schiller’s Maria Stuart applies the ideals of German Romanticism to her story – passion, faith, intrigue, and danger. His play imagines a clash between Mary’s passion and Elizabeth’s intellect, calling for a style that’s impassioned, melodramatic, and suspenseful with a lush language and brazen theatricality inspired by Shakespeare and Corneille.”

In 2005, British playwright Peter Oswald adapted Schiller’s original play into what Heimbuch calls “a more spare, modern version for the Donmar Warehouse in London. Oswald’s adaptation tightens the language – keeping its imagery but removing much of its formality – and he highlights the intrigue and suspense of the story. As a result, this version is more tense, personal, and vicious than Schiller’s script, as we see the intense threat these two opposing queens posed to each other’s lives.” It is Oswald’s version that you will see at Red Eye. 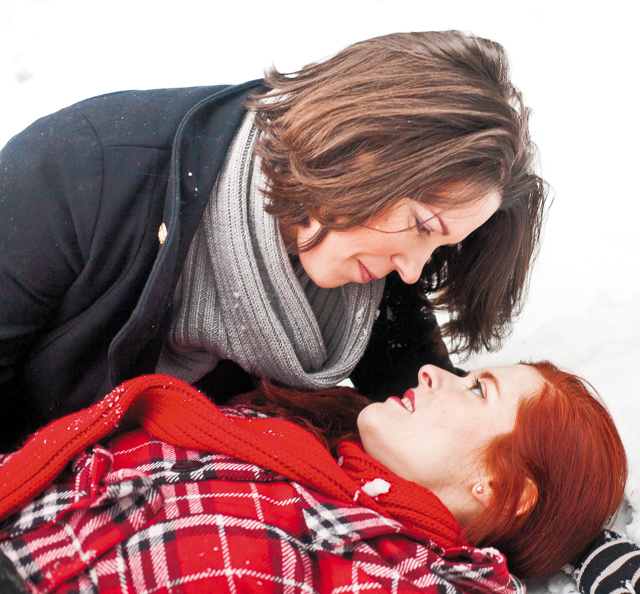 Fortune’s Fool is producing a play from the late 1990s that tenderly portrays a relationship between two women falling in love directed by Ben Layne. Stop Kiss by Diana Son is best known for its take on a violent attack on two women in love. However, actress Ariel Lief holds that because the play came into being around the same time as the prolonged brutal murder of Matthew Shepard in 1998 that some productions focus too much on the attack. She holds that “the heart of this play is love. An unstoppable, life-changing love. Neither of these women had previously ever been with women. They had no real experience with gay culture at all, and had always been involved with men. But they met and fell in love.”

Leaf also feels Son’s play is “about identity. Though people have become more accepting of chosen identities, it is still asked of us to pick one, and not change. Callie (Leaf) and Sara (Katie Starks) are both chafing at the identities other people have assigned to them and are yearning to find themselves. They are free to choose those identities with each other because they have no preconceived notions of what the other is like. They see in the other themselves, and all the things  they’ve wanted, but have never been brave enough to act on. They give each other that courage.” 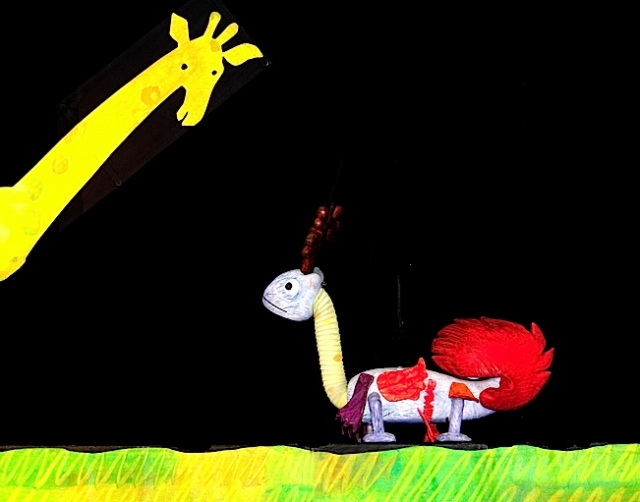 When you start watching this dreamy touring production by Nova Scotia’s Mermaid Theatre at CTC you may think you are in the presence of extraordinary high tech. However, in the brief but fascinating talk-back commencing after the 45 minute show, Jonny Thompson and Mara Zigler reveal how they and stage manager Yvonne Yip make it happen. (You’ll want to hang for that. Seriously.)

The manipulaton of fabric, unusual puppets, and black light are the bedrock of this beguiling theatrical vision. Through these we are introduced to a little cloud who transforms into various formations, a chameleon whose surface becomes the same color as what it’s up against physically, and a caterpillar with an appetite that leads it to its own glorious transformation. Jim Morrow has adapted Eric Carle’s stories for stage with an empowering trust in the steadiness and reliability of nature. Beneath the surface is a wise blend of science and spirituality. Steven Naylor’s lovely gentle music and Gordon Pinsent’s resonant recorded narration enhance to hypnotic effect.