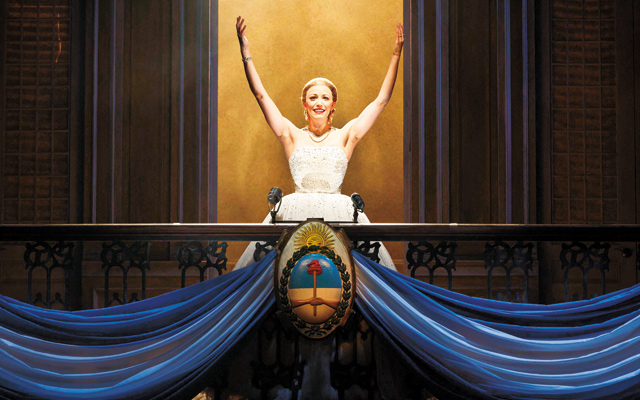 This is not your mother’s or your gay uncle’s Evita, though they will probably want to check it out anyway.  Eight years ago Andrew Lloyd Webber’s musical was revived in London with major revisions. In the 1970s when Lloyd Webber and lyricist Tim Rice first created the show it was criticized for being more Anglo than Latino. However, the current tour, which derives from the ’06 revival, reflects a shift more toward the Latino, especially in Rob Ashford’s Argentinean style which incorporates tango.

However, you’ll hear the same docket of sensational songs as well as the Oscar-winning You Love Me which was added to the miscast but impressive 1996 starring Madonna. The Material Girl is a phenomenon in her own right but her voice wasn’t cut out for Lloyd Webber’s demands and she was afraid of showing as Eva Peron’s dark side.

However, the fact that the songs are still, by and large, the same and intact, show that the thrust of the story is the same. Loyd Webber and Rice have shaped Eva ‘Evita’ Peron (1919-1952) as a woman of the lower classes who claws her way up to be First Lady of Argentina in order to get back at wealthy socialites who she feels had snubbed and thwarted her. As created for the musical she spends the national treasury, dogs the rich and cheers the poor. However, her own tastes are excessive, despite her leftist pronouncements. Certain lyrics nail this: I come from the people / they need to adore me / so Christian Dior Me / From my head to my toes. Hypocrisy or necessity? You be the judge. Tony and Olivier-winning director MIchael Grandage has staged Evita. Caroline Bowman stars. Josh Young plays Che, a symbolic voice of the people that haunts the woman throughout the musical.

After Adolph Hitler there came various new tyrants of diabolical will. One of the worst was Augusto Pinochet of Chile. The dreaded military dictator overthrew democratically elected President Salvador Allende, a socialist, with the help of American secret forces marshalled by Henry Kissinger and Richard Nixon. The concept of being ‘disappeared’ is one that came into global vernacular and is now typically associated with Pinochet. It is a concept also prominent in two major, but regrettably, forgotten honored films of the 1980s: Missing and The Official Story. However, that concept is reflected on in what is this year’s Out There series’ most eagerly anticipated performance. Director Lola Arias has been receiving global accolades for her work.

Walker Art Center Performing Arts Director Philip Bither goes around the world to assess performing arts. He says The Year I Was Born was “one of the most inventive and emotionally powerful works that I saw anywhere in the world last year. Arias created not just a strong performance work, but to my mind, a stunning new form of documentary theater. The show features 11 people, born across a decade of revolution and dictatorship in Chile, coming from disparated political and economic backgrounds. While excavating their own parents’ personal histories, which ranged from far left to far right, they not only reclaim a wrenching political era for the next generation but create a diverse community on stage that can only give one hope. Using a wide spectrum of ingenious theatrical devices, Arias and her real-life performers offer universal truths that spread far beyond 20th Century Chilean history. ”

In one of the most masterfully understated film performances ever, Judi Dench devastates as Philomena Lee, a senior citizen who in real life searched for her son who was snatched away from her while she was indentured as a young servant for a sect of Irish nuns. Nonetheless, Philomena stands by her Catholicism to the end, albeit, with an understanding of the dark side of her church. Steve Coogan in another beautifully understated performance, plays Martin Sixsmith, an atheistic journalist who clears the path to discovering the fate of her son.

They find that the child, sold to wealthy Americans in 1952, had become a White House staffer for Ronald Reagan, while suffering from AIDS, and maintaining a primary relationship with another man. You couldn’t make a story like this up! However, the harshest diatribe in the film has nothing to do with homosexuality, but with out-of-wedlock heterosexual ‘fornication’. It’s quite jolting.

Note that Philomena has been directed with sublime sensitivity by Stephen Frears. Bear in mind that Frears directed one of the pioneering gay independent films of the Thatcher/Reagan 1980s, My Beautiful Laundrette, which launched global awareness of an actor named Daniel Day-Lewis. Philomena, the film, has also launched a tidal wave of media and public interest in children who were warehoused in Irish convents en route to being sold.  Some would call it trafficking. And for those who want to accuse Frears of being a radical lefty, recall that his film, The Queen, starring his wife Helen Mirren, may be the finest conservative film of recent years.

John Guare’s 1990 comedy is a work that can be said to have already accrued classic status.  It is inspired by an actual experience in 1988 in which a black teenager went to the homes of various wealthy Manhattan couples and claimed to be one their kid’s college chums and the son of the first black Oscar-winning actor, Sidney Poitier. As penned by John Guare, this intruder also has a way of seducing young white men, one of whom puts him in touch with the private affairs of an art dealer and his wife. The play also looks into suicidal anxiety over being gay.

Guare (b. 1938) is also known for The House of Blue Leaves written in the 1960s, which has a kinetically absurdist flair and yet is deeply moving. In the ’70s he wrote Landscape of the Body, a rather lurid piece, that has achieved a kind of cult status. Six Degrees of Separation is a pleasing evolution of a man whose eclectic styles and penetrating eye are always worth encountering. The actual concept of six degrees of separation refers to a theory wherein every person on earth has only six people between him/herself and every other person on earth. Austene Van directs. 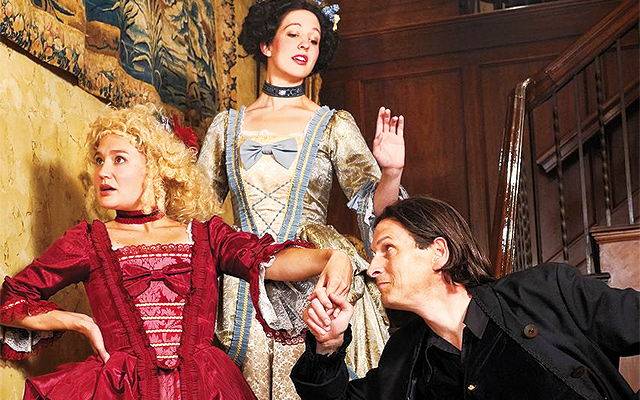 Moliere was French theater’s 17th century voice of heresy. He took on the monarchy and the Catholic Church with a vengeance and is often considered to be the most important playwright between Shakespeare and Ibsen. And like those titans he is emulated by many playwrights who have held him as a prime exemplar. Acclaimed American playwright David Ives is one of those. At Park Square you can catch his rumination on Moliere’s The Misanthrope which is somewhat heretical in its own contemporary right.

Director Amy Rummenie shares “what I love most about The School for Lies is that David Ives has taken only the fun elements of Moliere’s The Misanthrope- the glitz, the fierceness, the blazing wit and the social satire and then he’s spun them into something utterly modern and bright that rings true to a modern ear. We get to keep all the trappings of a beautiful period play: the glorious dresses, the ridiculous fops and a set dripping with crystal and then run with the best parts of the story: the sex, the scheming, the danger and the verbal fencing. And then some more sex, for good measure.”

Rummenie adds “this play has been a joy to work on- it’s full of double entendres (or to be frank, out-and-out zingers), dagger-sharp repartee, and like all the best comedies: a heart of gold. On the page alone, the script had me laughing aloud and now that we’re in rehearsal, it’s come brilliantly to life. The wordplay is fast as a farce, with constant rhymes that seem like a tightrope-walk of linguistic daring. And somehow the actors are even brighter and more inventive than all of that, mining the clever turns of language for all their worth.”