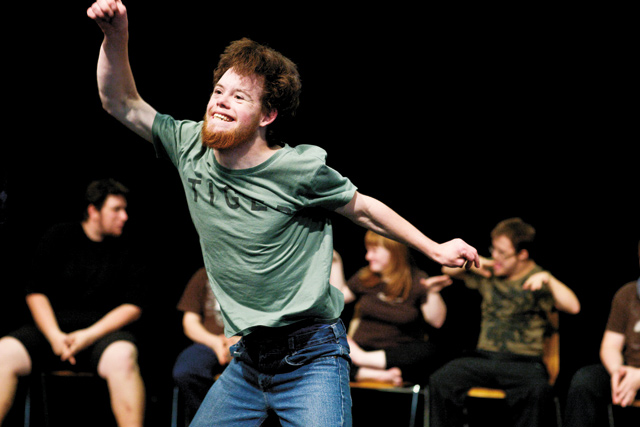 Switzerland’s acclaimed Theater HORA, a troupe of actors with disabilities, and conceptual performer Jerome Bel of Paris, have blended energies with a work titled Disabled Theater. It deals with issues of of identity, discrimination, and the limitations of preconceptions. Critics in Europe and New York have gushed over the 90 minute piece’s frank and forthright approach to these issues. Theater HORA was formed in Zurich 20 years ago with the mission of developing the artistry of persons with learning difficulties and uplift their work to a professional level. The group’s unfiltered approach and raw theatricality takes theater to its most basic form. Actor and audience connect with no frills.

Jerome Bel is known for innovative and experimental work that pushes lots of buttons. Past pieces have involved total nudity of performers, international dance, and a single actor wearing many T-shirts. Bel and Theater HORA point to the ever expanding and unfolding reality of what is possible in performing arts. At the same time they know how to take theatrical performance back to its timeless elemental basics. In our own culture, where most people have become habitualized into their theatrical tastes and comfort zones, the Walker Art Center, once again brings evidence that there are fewer limits to performance than we’ve been conditioned to believe. For those who have never seen topnotch work by actors with disabilities, consider that you have been prejudiced and predisposed. The Walker, the Guthrie Theater, and Minnesota’s own Interact Theatre have provided ample evidence that such prejudices are outdated and just plain wrong.

You may cringe and squirm. You may jump for joy. Or some of both when you see this year’s Palme d’Or (Best Picture Award) Winner at the world’s most prestigious film festival at Cannes. It runs just over three hours but if you realize you are in for an intimate look into the life of a teenaged lesbian falling in love for the first time and just stay with it, the film has rich rewards to offer. Adele Exarchopoulus plays high school student protagonist Adele who is wooed by a post-secondary art student with died blue hair named Emma (Lea Seydoux). Femme Adele is vulnerable and very intelligent, but gentle in intellectual discussion. Butch Emma is steely and learned, the type who might shun you if you didn’t agree with her hyper-opinionated views. The age difference between them in the beginning of the film will surely raise eyebrows. Had Emma been a man would he have been arrested for stalking and statutory rape?

One of the many riches of this beautiful film is the juxtaposition of the Apollonian to the Dionysian. It’s packed with organically interpreted intellectual comments made by various characters and will soon shift to some of the most passionate sex scenes you’ll ever see in a film not screening at an adult arcade. Moreover, Blue is packed with unexpectedly interesting scenes that revolve around food, intimate scenes between the two young women, moments of affection, as well as many very touching moments as Adele becomes a young woman committed to teaching very young children ways of appreciating cultural traditions beyond her native France. Though there are some scenes of parental unconsciousness and lesbophobic bullying, it doesn’t tarry too long in those areas like so many other queer-themed films do. Nothing against some of those films, but those situations have been played out often. That said, so have the coming-out and coming-of-age themes that Blue is the Warmest Color is grounded in. But it’s the intimacy that puts this film in a class all its own.

Nor do politics and discrimination take center stage aside from some protest and Gay Pride scenes. Tunisian director Abdellatif Kechiche has uncompromisingly focused Blue is the Warmest Color in profoundly human and intimate ways that you may have never seen in a film or on stage or experienced yourself. If the film seem slow-going to you, maybe take that as an indicator that it’s your own mind that has become too filled with its own chatter and clutter so that you cannot be present to what the film is gracefully taking its time to relate.  It hypnotizes. It reminds us just how confusing and difficult youth can be. And perhaps most difficult of all, is that it makes the glbt community which is so steeped in ‘celebrating itself’, take stock of how we can be absolutely awful to our own. And that no amount of screeching about xenophobia and queerphobia can deflect from the fact that we can be inexcusably cruel to our own. Kechiche has come under severe criticism from his actresses, some critics, and some audiences. But sometimes the birth of art can be extremely difficult. And Kechiche, Exarchopoulus, and Seydoux have given birth to what will surely become a classic not only in queer cinema but cinema in general. (And please note I did not use that idiotic term ‘instant classic’. Blue is the Warmest Color has the depth of intimacy and bravery in showing human behavior at certain extremes that you just don’t see, even in the best love stories. The mixed audience I saw it with stayed with it through its entire length. Wow!) 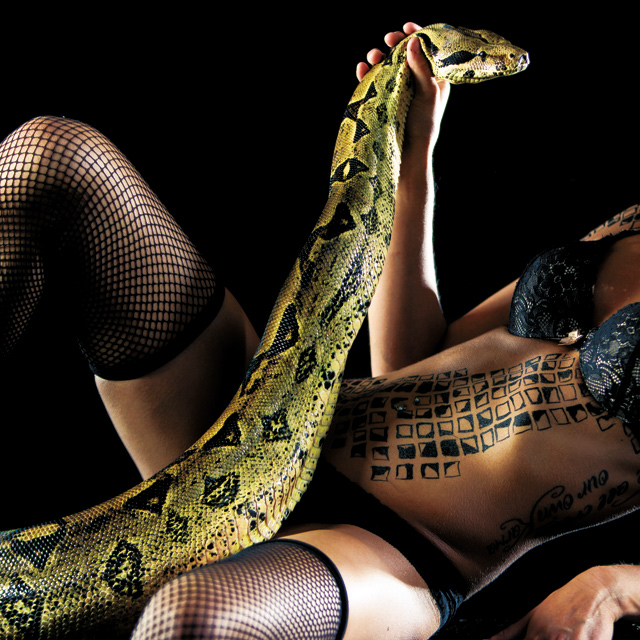 The Sexual Life of Savages. Photo by Dan Norman

The internet and its sex connection sites from gay.com to craigslist to AdultFriendFinder to match.com, etc. etc. etc. have changed the entire landscape of sexual activity and human relationships. The genie escaped from the bottle years ago but multitudes have yet to integrate the shift. Even if you have integrated that shift yourself, many around you, including those who could be your Mr. or Ms. Right or polyamorous life partners may not have. Generally speaking, many older people are understandably skeptical and sometimes wisely skeptical of how cyberspace can wreak havoc on one’s personal information, hence their very life. Generally speaking, many younger people are careless and not skeptical enough of what can go wrong with putting your self out there online. Ideally, both extremes, of course, should be balanced. That’s why Ian MacAllister McDonald’s new play is so eagerly awaited as it takes on the realm of sexual posers, sexual explorers, and swingers. The honest explorers and the swingers may repel your own moralistic view point but they tend to be genuine in their desire. The posers….well that’s another thing. (Check out ‘men seeking men’ on craigslist sometime and you will be struck by how many self-described ‘jocks’ are listed. You’d think half of the local college and professional sports teams in the metro area were seeking homosexual activity. And of course, you must be under 30.)

The Sexual Life of Savages is a kind of anthropological study of how contemporary Americans balance or not, their primal impulses with ethics. Joe Bombard plays Hal, a man whose girlfriend, Jean (Meghan Kreidler), has had more sexual experience than he has had. This throws all kinds of energies into motion. Sexuality, after all, is a mighty power. Is there a way you can master it without suppressing it? That’s a question to ask yourself . Also, has the notion that you are all the people you have ever slept with finally worn out? Recall that that was a shrewd right wing shame-based ploy to inculcate fear about gays and homosexuality in the AIDS-hysterical 1980s. Thankfully, there’s an upward spiral that still transcends that is making us reconsider and reconfigure a more realistic and satisfying view of sexuality and relationships. The web, for all its confusion and deception can also be ground zero for a better and more sexually satisfying way of being. We see this with serious talk about polyamory, the way serious thinkers like Dan Savage challenge judgements about kink, spiritual movements and figures like Abraham via Esther Hicks that see sexploration as legitimate and uplifting, and authors like Ryan and Jetha whose Sex at Dawn has blown the lid off the very way we think of ‘animalism’, prehistory, evolution, gender, and monogamy. Go to the Theatre Garage to see if MacAllister-McDonald is on the wave or resisting it. Either way, the play will give you lots to think and fantasize about. Walking Shadow Theater continually presents well-written plays that deal with social concerns and the company is admirably unafraid of boldly and intelligently addressing all kinds of sexual issues.

It’s been running for 12 years on London’s West End and was voted on by the public as the UK’s favorite show by the Olivier Awards. That’s Britain’s equivalent of the Tony Award. Further proof that Queen and its lead singer who died of AIDS, Freddy Mercury, still live in the hearts and psyches of the masses. Televison writer and comedian Ben Elton has reshaped the show somewhat for its American run reflecting social changes that have occurred since it first opened. Elton shares “this is a show about legend. We take the legend of Queen and created our own fantastical story of young kids battling the mighty corporation which wants to suppress their individuality and their love of music. They need a hero who can help them in their struggle, and we have two -the dreamer, Galileo and the sassy rock chick, Scaramouche.”

New pop references have been added, not surprisingly one of which is Miley Cyrus and a new song, You’re My Best Friend, which Queen-lovers will truly appreciate. Tribeca Theatrical Productions’ Jane Rosenthal adds “it’s almost a new show. However, in some ways, it was already ahead of its time when it opened. The overarching theme is a demand for individualism and intimacy in a world where everything is downloadable.” Elton points out ‘there is a scene where our two leads run away and discuss their loneliness and isolation. In 2013 it seemed ridiculous to discuss friendship without reference to facebook. Young people now live in a world where it’s possible to have many virutal ‘friends’ and ‘likes’ and yet be totally isolated and alone.” This is what compelled You’re My Best Friend to be added to the show. Hennepin Theatre Trust is the group that brings We Will Rock You to Minneapolis.

This is surely one of the most effective examples of the sci-fi comic book and graphic novel approach ever applied to theater. Cranky eighth-grader Violet (Sasha Diamond) and her telepathically-inclined nerdy younger brother, Bruce (Alton Alburo), must save the universe by becoming superheroes. The play’s action shifts to various dimensions to thrilling effect thanks to scenic designer Meredith Ries, sound designed by Shane Rettig, and lighting by Paul Whitaker. As cheesy as writer Lloyd Suh’s dialogue is, it says a lot about the need to accept others for being different. And not just racially, but in other ways. No, I’m not saying we are post-racial. But sometimes the equality movements compel and impel many people to see those basic socio-political differences – race, gender, sexual orientation, ability – as the whole picture. But they are not the whole story of course, Behavior, image, personal history and demeanor count as standards for acceptance and rejection.

The Wong Kids is a production of New York’s Ma-Yi Theatre presented at the Children’s Theatre. That it champions children and positive images of Asian-Americans is admirable. However, it contains a regrettable cross-gender character with grotesque bare breasts and deliberately flabby orange skin, both intended to be scary and evil. Costume designer Becky Bodurtha and director Ralph B. Pena should have seriously re-thought this. Unfortunately, the youthful audience is impressionable and this representation makes an ugly imprint. We are constantly told how the white and African-American communities have strong swathes of queer-phobia. Ironically, Asian-American activists were railing against the Ordway’s recent hosting of Miss Saigon because of its purported negative Asian-American images. But there has been little objection by queer activists over the CTC/Ma-Yi production. (Full disclosure: I have written and spoken publicly at a U of M Asian American Law Students forum in defense of Miss Saigon and of the ill-conceived campaign that has long been waged against it.)