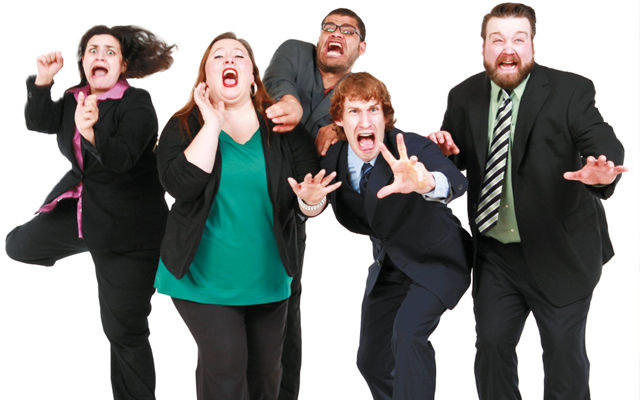 Attack of the Best of the Brave New Workshop. Photo by Dani Werner

Hopefully, this spirited ‘Attack’, directed by Caleb McEwen, will be one of more revues over the next year to mark the region’s premiere comedy theater’s 55th anniversary. The current revival of vignette selections is mostly from recent years and delightfully reflect recent issues. However, it would be nice to see them dig deeper into the archival vault. McEwen is a first rate comedy director and it would be a juicy challenge for him to boot.

That said, there is one vignette that surely seems to be from a quite a way back: a commercial spoof about how razor blade manufacturers of two or three decades ago were continually adding blades to their razors in the name of ‘a closer shave’. We are made to wonder about what the consequences could be to one’s skin and what’s below it if you were to add over 30 blades to a single razor. I don’t know how younger audiences may feel about it but I thought it was hilarious.

As for recent mischief, there’s Matt Erkel as Minnesota Vikings owner, Zygi Wilf, brightly portrayed as a man out to bilk the taxpaying public to build his stadium. A skit on gay divorce has an adorable Tom Reed and Andy Hilbrands as a lovey-dovey gay couple horrified that an angry lesbian couple (a prickly Taj Ruler and Lauren Anderson) are at each other’s throat and are splitting up. It’s a savvy scene that raises speculation about what we might expect to be dealing with in the next wave of glbt equality issues.

But the ladies outdo themselves in a hysterically funny segment where they play not characters who wear sweatpants and yoga pants, but who are a pair of sweatpants (Anderson) and a pair of yoga pants (Ruler). Yoga pants’s lack of modesty and mystique perturbs Sweatpants immensely. But things get worse when she finds it’s not the 1990s anymore and that it’s not only mothers who are wearing tight-fitting yoga pants, but their little daughters are too. It’s the outrage about the sexualizing of young girls with skimpy clothing, marketed as something one oughtn’t even be concerned about. Yes, it’s terribly funny but it also says something about our consumer-driven at all costs economic system. It’s also a terrific portrayal of women of different generations at odds with differing values.

Minnesota and the Civil War &

These two haunting exhibits absorb the visitor into dark chapters of American and Minnesota history. A photograph of the fabled First Minnesota regiment flag and veterans of the First Minnesota Artillery Battery photographed three decades after the war’s end tilt us into the anguished world of American life of that time. It’s all simple but grippingly powerful. Notice how with the Wheeler & Wilson sewing machine with stirrup foot-pedals you would move your fabric from side to side rather than back and forth. Surely this would have suited quilts, like the various ones on display, or the black mourning dress worn by Anoka County’s Lucy Downs which she began wearing continually halfway through the war.

You’ll see the drummer boy fife that belonged to Minnesotan Albert Woolson, the last surviving Union soldier. His life was noted by President Dwight Eisenhower when he passed away in 1956 at 108. Uniforms and the prisoner garb worn by those interred at Georgia’s notorious Andersonville site are seen along with bugles, guns, and crude surgical kit instruments: forceps, a scalpel, suture needles, a brass scarificators.

Most wrenching of all are the letters written by young Minnesota soldiers. Voice overs of their correspondences compliment a gauzy scrim with photograph projections of the war. On the other side of the scrim is a re-created ground section of a desolate battlefield cryptically adorned with a knapsack, cap, uniform, and timepiece. One letter voiced over relates how explosions tear men and horses to pieces. We don’t need to see it to realize the horror, the speaking of it is enough.

Where the Civil War exhibit space exudes grays and reds, the Dakota War space right next to it, is a brightly contrasting yellow. The paradox is that what it relates is just as bleak and bloody. It’s as if to shine light on a pivotal event that few people still know little about, even in Minnesota.

The US-Dakota War of August and September,1862 ruptured southern Minnesota. In this case the US government’s chronic Indian treaty-breaking reached a tipping point. President Lincoln ignored envoy George E. Day’s reports of rampant corruption and agreed upon annuity payments were not paid to the Dakota. To worsen matters, government agents and traders refused to release provisions. It was a year when game was scarce and Indians were starving. When four young Dakota men killed five settlers near Acton, the war began. Both sides committed great bloodshed and atrocities. The number of Dakotas killed is not know. 400 to 600 white civilians and soldiers died.

The Dakota lost the war and on Dec. 26, 1862, 38 Dakota men were hanged in the largest mass execution in US history. Lincoln gave 264 other Dakota men prison sentences – commuting their death sentences. Territorial Governor Alexander Ramsey called for Minnesota’s Sioux to be exterminated and was ultimately cleared of charges of treaty fraud. Punitive expeditions were enacted over the next few years and at Fort Snelling Dakota were incarcerated. The monumental irony of all this is that this was during the same time that the same nation and Minnesota troops were fighting the Civil War, which was judgement on the part of the Union against the expansion of slavery of another nonwhite race.

The Dakota exhibit is filled with informative placards, short visual presentations, and weapons like bayonet, double-barrel shotgun, various rifles, and colt revolver. A copy of an engraving of the hanging is rather jolting, especially when you find out that it was imperiously used for advertising by Mankato’s Standard Brewing Co. In bold contrast, displayed also is an evocative spiritual painting by Lyle Miller. The hope is that healing is possible. These two exhibits are powerhouses that reflect attitudes we still have embedded in the American and Minnesota character a century and a half later. It’s also a call, not to arms, but to forgiveness.

Artists in Storefronts organizer Joan Vorderbruggen has her own exhibition as a part of the project. It pays homage to a man she met and befriended – the elderly Carl E. Friberg who became diagnosed with an aortic aneuryism. After she moved away he wrote her letters about his observations, his past, his hopes, and current day events. Vorderbruggen shares “I’ve held onto this very lopsided cardboard box packed with letters from Carl for so long it’s become a story within a story. Moving from one coast to the other and a thousand places in between always traveling with this box for a decade now. What has revealed itself to be so magical as I read and reread all the thoughts he was sharing with me in those letters is the fact that’s it’s in his own peculiar and beautiful hand. When his pain had worsened his penmanship did too – when he was daydreaming and tangential there were more scribbles. I can very literally glean so much more information because it’s tangible and one of a kind. Holding the actual papers with the ink that came from the pen in his hand will forever be my best treasure.Spending dozens of hours hand embroidering these touching letters makes that experience even more divine, every word taking on a spark as I slowly enjoy creating in what feels like his true presence.” 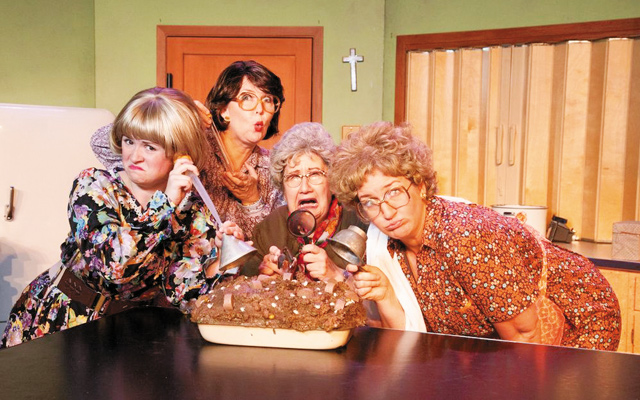 The fifth installment of the beloved musical stage comedy series is a sure bet. Playwright Greta Grosch has written the script based on the books of Janet Letnes Martin and Suzann Nelson. Grosch, also a great comedian and comic actress in her own right, has a gift for not only writing funny comedy but for infusing it with a deep sense of humanity. The women you’ve loved in previous episodes are back. The incomparable Janet Paone returns as Widow Snustad who this time around has to deal with the reality that change is something that happens whether we like it or not.

Composer-lyricist Drew Jansen who recently triumphed with The Geriatrical Theatrical shares that with the Church Basement series “all five episodes involve in some way the notion of ‘change’. In this case, the big change is that the church is closing down due to declining membership. The task here was to somehow find the funny amid the sad, while still respecting the emotions of those in the audience who have experienced something similar. The closing of long-standing rural churches, I’ve come to find, is almost epidemic these days. So this show digs a little deeper emotionally than the other four, and I think the payoff at the end is much greater because of it. Yes, the church does close but there ‘s a whole lotta other stuff going on at the end that calls for celebrating and rejoicing, even in the midst of the turmoil and sadness.