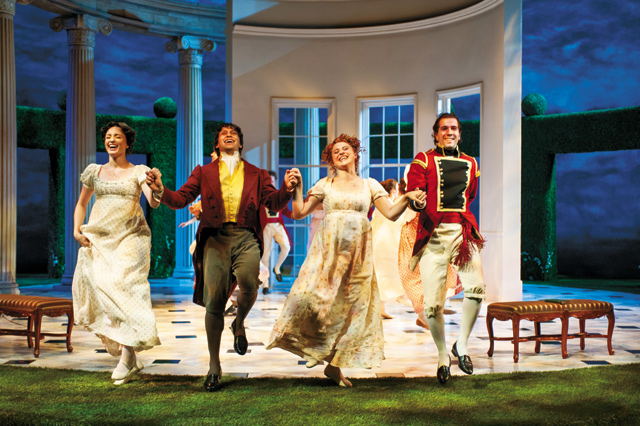 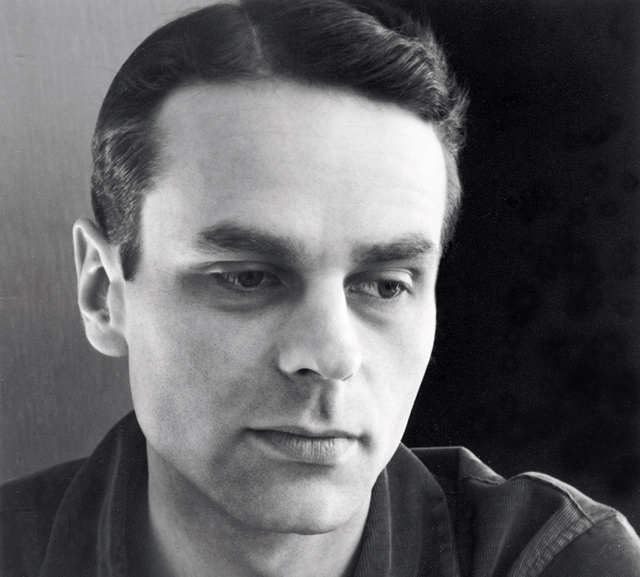 Poet/filmmaker James Broughton (1913-1999) exemplified the free spirit of the Sexual Revolution and the energies that were percolating toward it in the first half of the 20th century. He said to “follow your weird” and this new documentary co-directed by Stephen Silha and Eric Slade explores his pansexual life experience. Broughton was a Radical Faerie and was known as Sister Sermonetta among fellow official members of The Sisters of Perpetual Indulgence. As a child, his mother detested his feminine behavior and so sent him to military school, but that didn’t work out. Unlike less literate queer folks of today, Broughton realized the importance of the ideas of Carl Jung. He fathered the daughter of film critic Pauline Kael in 1948. At age 49 he wed Susannah Hart in a truly extraordinary marriage ceremony. His short film The Bed (1968) contained more nudity than any American film up to that point. At age 62 he fell in love and partnered with Joel Singer who was almost 40 years younger. Broughton sensed that Singer was the incarnation of an angel who visited him when he was three years old.

Walker Film/Video Curator Sheryl Mousley relates “The title, Big Joy, comes from Broughton’s 1993 memoir, Coming Unbuttoned – he used this term to describe his steadfast mission to live a joyous life. He found happiness through laughter and love, both powerful tools of creative energy. Visiting in the Twin Cities several times in the 1980s, Broughton showed his films and read poetry at Film in the Cities in St. Paul, at the invitation of Sally Dixon who appears in the documentary, and at the Walker during Filmmakers Filming.” 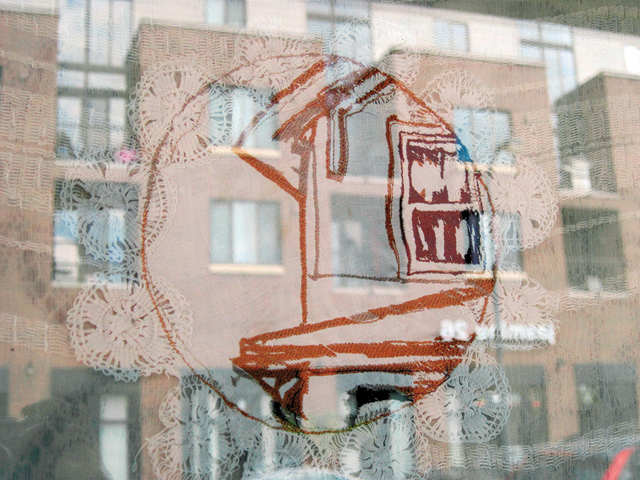 At the delicious Black Forest Inn you can add to your eating pleasure by checking out Jennica Kruse’s embroidered portraits. She describes it as “a series of portraits of homes in Minneapolis, parts of neighborhoods that I live and work in, and so it has a personal emotional impact for me. I am especially glad to have them as part of the Artists in Storefronts program because of the project’s focus on the community. I like the parallels between the architectural structures of homes, the more intimate sturctures of our own bodies, and the delicate nature of embroidery, lace, thread, and cloth.” The Artists in Storefronts is happening in the Whittier Neighborhood in which the Black Forest Inn is legendary for its German cuisine.

200 years ago -in 1813- Jane Austen’s novel was published and has continuously sold, sold, sold! Various stage and film adaptations have been rendered and Simon Reade’s version at the Guthrie gives the novelist, often-hailed as western literature’s greatest, her theatrical due. This production has been hyped for its romantic leading man, Vincent Kartheiser, of television’s dazzling Mad Men series. Indeed, the man love and reviled as Peter Campbell gives a fine performance as Mr. Darcy though he could use a bit more psychic heft.

Thankfully, however, director Joe Dowling has not turned Pride and Prejudice into a star vehicle for Kartheiser. He has meticulously shaped a captivating array of in-the-moment performances that transport us to the Regency era of 19th century England. Austen’s complex language can only work dramatically if the actors  are highly concentrated  in the period and its collective mentality, which this entire ensemble does with scrupulous flair. That comparatively restrictive mentality in comparison to that of our own era makes for humor and wit galore.

Moreover, P&P‘s central theme of arranged heterosexual marriage based solely on a woman’s family income is a striking reminder for our time of increasing marriage equality that marriage has historically not been about love, but about assets and patriarchy. Ashley Rose Montondo as protagonist Elizabeth Bennet glistens as a young woman who will not settle for less than love even if it means she might well suffer the dreadful stigma of ‘spinster’. Peter Thomson and Suzanne Warmanen are marvelously contrasting as her parents. Ironically, her father wants Elizabeth to marry for love, while her mother is spasmodically obsessed with materialism.

Aeysha Kinnunen adds vibrant mischief as rebellious daughter Lydia whose impulses and arrogance contrast Elizabeth’s measured defiance. Austen figured out two centuries ago in her novel that rebellion is certainly necessary at times but that one has to go about it thoughtfully and wisely adapt as needed, which Elizabeth does, as new information enters our sphere. Note that this is something nicely respected and realized by playwright Reade.

Two innovative performance groups, Bedlam Theatre and Live Action Set, blend their energies for a ‘roving adventure’ of Lowertown St. Paul. Numerous short performances shaped by artists and the audience will be intertwined as you go along. Noah Bremer directs. Irna Landrum, Community Engagement Director for the project explains “we just wanted to make something great with as many people as possible. Community members – whether this is their first or 1001st performance- are influencing this thing from beginning to end. None of the pieces for the show were pre-scripted, so everyone who is in it will have had a chance to mold The Big Lowdown – what it looks like, what it sounds like, what it feels like, and even where you get to experience it. And the collaboration continues with our audiences. The people coming along on this adventure with us -and those passing by wondering just what those people are up to- will shape this show.”

Los Angeles’s lovable Les as in Les Kurkendaal, returns with Dirty Messy Love, joined with guest storyteller Allison Broeren. It’s a comedic take at what can happen when love goes wrong. Lovable Les shares “this show was actually inspired by the fight for marriage equality in states like Minnesota and California. There has been a lot of talk about love and relationships. Now that we can get married legally a lot of people I know, whether single or married, have marriage on the brain. I have been in a long term relationship for almost nine years but I found myself thinking about all the frogs I had to kiss to get there.”

Speaking of marriage equality, check out Happy Double Wedding, a gender-blind performance work about marriage. This work-shopped piece shows that there are universal issues surrounding the marriage ceremony. Dangerous Productions Artistic Director Tyler Olsen shares “no matter who is getting married to each other, it’s a given that a wedding can be ridiculously expensive, stressful, and can create unnecessary drama. We think gender is irrelevant compared to these other elements, which bring natural comedic moments for the audience.”

Bearded ladies are used to expose binary gender thinking in Stubble. Writer Martha Heyl shares that while working on the project “I’ve discovered how much of the main character’s story is my own – my own struggles with ‘gender’ and what to do with my future- and how important it is to me to share this experience with others.”

The Final Act by Aaron Greer, Ben Tallen, and Brian Watson-Jones considers the controversial death of renegade Elizabethan playwright Christopher Marlowe. Director Carin Bratlie says “Marlowe’s sexuality is a big part of  the plot and his motivations in the play. He doesn’t hide his sexuality and doesn’t apologize. He owns who he is. He is his own man, and uses both men and women to get what he wants.”

In The Gravity of Ghosts showcase, Cole Sarar tells her story, titled Faultline. She shares that it’s “a fictional story of two women in the early white settlement of the Midwest.The characters are flawed, passionate human beings who as narrators are unreliable, and the truth of the relationship and events between them can exist only in the audience’s interpretation. I created this story because human beings constantly rewrite events in our heads and out loud, whether intentionally or unintentionally. Fiction, especially that which includes some aspect of the fantastic, like ghosts, gives me a unique opportunity to allow the truths of unreliable narrators to hang in the balance. In a time period and location when lesbian relationships were little considered.” 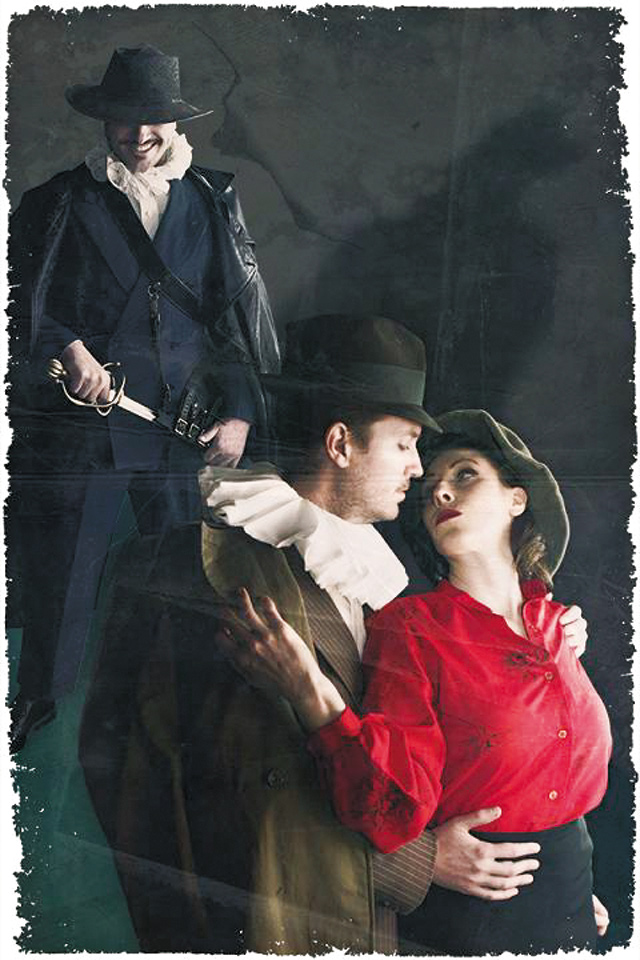 The Final Act at the 2013 Minnesota Fringe Festival. Photo by Scott Pakudaitis