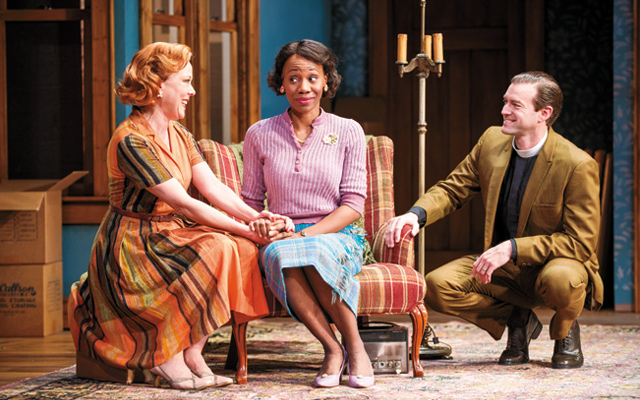 This triple crown 2012 Best Play winner -the Tony, the Pulitzer, the Olivier- is given a vivid staging at the Guthrie directed by Lisa Peterson. To be clear, you don’t have to know anything about the actual 1959 drama, Lorraine Hansberry’s A Raisin in the Sun, that playwright Bruce Norris has used as his inspiration, to fully enjoy Clybourne Park. It simply imagines the white married couple -Bev and Russ- moving out of the house that will soon be occupied by Hansberry’s black family, a couple that does not appear in the ’59 original. But Norris sets his play in that year – the year Raisin is set and was first produced.

Guthrie regulars Kathryn Meisle and Bill McCallum as Bev and Russ capture Norris’s uncanny understanding of the limited consciousness most white people lived within during that time without becoming overly and glibly satirical. In other words, for all their naivete, as maddening as it is to us today, Bev and Russ are poignantly human. Norris underscores this by showing that the era’s limits and politesse have sadly hampered their ability to deal with the suicide of their son who had been stationed in Korea, as well as their ability to stand up effectively to the smugness of white neighbors who resent that they’ve sold the house to a family of color.

Act Two imagines the house 50 years later when a diverse group of neighbors discuss zoning and building code issues. It’s an act packed with clever, witty, and sometimes refreshingly raw exchanges that challenge the politically correct way we often tend to communicate with one another. Compare it to high caliber television. It’s great for laughs, and even certain amount of insight, but it lacks the craft of Act One. Hence, it undercuts the moving final sequence which moreover, Peterson has not adequately explored. She sometimes has a discomfort with certain types of male characters: we saw it last year in her direction of Peter Hansen’s Brick in Guthrie’s Cat on a Hot Tin Roof and this year with Steven Lee Johnson’s take on Kenneth in Clybourne Park. Thankfully, Hansen, who now appears in Clybourne Park, is in top form in a transformational performance well directed this time around by Peterson.

Now that we move beyond the cocoon of the marriage equality campaign, other issues that have long been brewing in the GLBT community are surfacing. These include Uganda, Bradley Manning, workplace discrimination, and as touchy as any of these are the negative attitudes held by many gays, lesbians, and some allies against others of gender and sexual ‘otherness’. Even some non-assimilationists are guilty of this. Immanuel Elliott and Cassandra Snow have comprised a collection of monologues and short scenes from submissions to Gadfly Theatre and from interviews. As cast member Patience Hughes explains “we wanted to showcase the common thread that binds those of us in the queer community and tell stories of people that you wouldn’t otherwise hear.”  Titled Queer!, it premiered in early June at the National BECAUSE conference presented by BOP (Bisexual Organizing Project) and is now at St. Paul’s Lowry Lab.

Erica Fields shares “I direct six characters and am cast as one. Of those characters, two identify as bisexual; one identifies as fluid and probably will identify as pan or bi some day; one identifies as polyamorous; one asexual; and a transgender woman and a lesbian. The two bisexual characters are older. Mine is a middle-aged bisexual woman, empty nester, who is a recovering alcoholic going through menopause. Her struggle with identifying as bisexual is with the preconceived notions that people have about bisexuals being promiscuous and oversexed. Being an older person she has trouble relating with younger bisexual people and also the idea that bi is a transphobic identity in the eyes of some younger LGBT people. She just wants to be allowed to be herself and not some stereotype.”

Fields continues “the other bisexual character (Jim Larsen) is married, and open about his sexual identity to his wife and children. He relates that he had been in a relationship with a man that ended and (how) the gay man’s friends rallied against him because he was not gay. This hurt as they were supposed to have been supportive, but once he broke up with their gay friend they rejected the bisexual man. He was made to feel like a fake intellectual because the gay men did not get that being bisexual is not the same as gay. It is not the fear of coming out as gay – it is being bisexual.”

Additionally, she points out “each letter in the acronym, LGBT, has its own biases towards the others and there is a sense of divisiveness and casual prejudice between the communities. The other characters, asexual (Meagan Kedrowski) and polyamorous (Siddeeqah Shabazz), talk about how their identity is not really understood by the gay and lesbian community. They feel they are not fully accepted as equals. The transgender character (Rachel Harvey) is an MTF who is gender specific in her identity as a woman. She tells of the lack of control she had during the transition as the medical and mental health professionals pushed and pulled her through the standards of care gamut until in the end she was left adrift to survive after losing it all. Later, she tells that while dating a lesbian, her girlfriend’s lesbian friends reject her and her girlfriend because in their eyes she is not really a woman. Men reject her for being either too much or too little of either gender.”

Queer! addresses the lack of cohesiveness in a GLBT community more permeated with its own categorical (un)thinking and misinformation than reported in mainstream media and even in much of the GLBT media. Fields stresses the importance of uniting in the service of finding solutions to problems. She points out “as my character says, by banding together more states passed marriage equality and more openly queer politicians were elected because we came together as a group. We can make it happen and we can be cohesive when we put aside our personal prejudices and biases.” 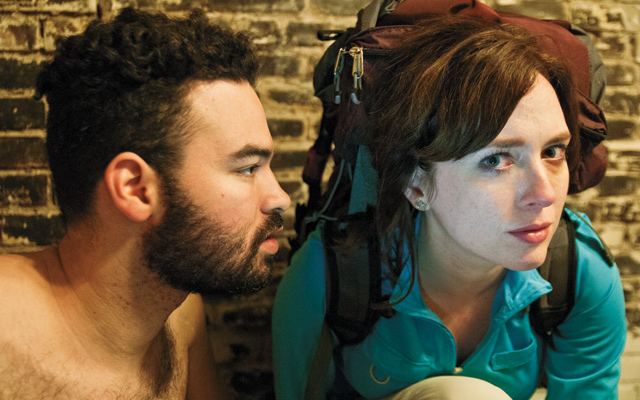 A radio personality in the Dust Bowl era lays the groundwork for this new Savage Umbrella collaboration. Playwright Rachel Nelson shares “at its heart, this is a play about how we map ‘American values’, specifically notions of Manifest Destiny and American exceptionalism, onto relationships. What does it mean to live in a country founded on the belief that this land was destined to us, and that it is ours to use as we see fit? How do these notions spill unconsciously into the way we think about our own bodies and the bodies of those we love? We wanted to look at the American landscape through ideas of abundance and lack -and what better place than the Dust Bowl, with its totally physical manifestation of what happens when we take endlessly – so often, we’re left with dust.”

Nelson adds “I was really interested in the ways that all of these complexities suggest queerness in the broadest sense -as a queer writer and performer I’m always looking for the ways that normative structures collapse and reconfigure in a way that is sexually, socially, and politically queered. When you are exploring the ways that spaces can be queered in performance, questions of history, space, and relationships become really interesting. Queerness manifests in Rain Follows the Plow in three ways. First, totally literally. The plot revolves around two heterosexual couples who are exploring same sex attractions and identity confusion. Second, the concepts of the play suggest and ask questions of finding queer spaces in identity politics and also in our notions of history and truth. No character is fixed and they all confuse traditional roles and simple definition. And thirdly, we are mapping out these complex locations visibly through the use of staging that asks the audience to re-examine the linear ways that we see.” 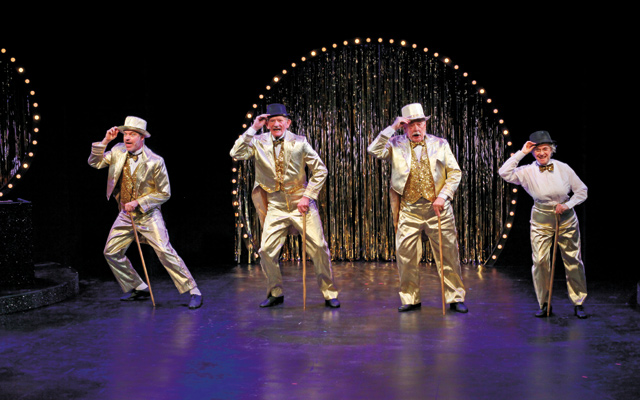 This wondrous new musical revolves around the idea that life is a game to be played and enjoyed to its fullest. A casino dealer named Ailments, charismatically played by Claudia Wilkens, is a sort of senior-ranking angel who metes out aches, pains, and debilitations to the aging. Richard Ooms, Wilkens’s real life husband, plays Louie, a curmudgeon, who like most of us would, tries to bargain with her. The chemistry between the two is marvelous and Ooms’s solo about Louies’s deceased wife, Twilight Savings Time, is very touching indeed.

The genius of John Fenn’s script is that on one hand it’s light and airy as a feather, yet it’s a profoundly spiritual assertion that simple changes in how one personally sees what life and the world hand you can and will shift your life and consciousness to a better place. It’s an idea that’s been around for a while but has seldom been manifested so fully and richly in a stage work.

Drew Jansen’s music and lyrics are quite simply his best ever. He and Fenn are on the same delightfully philosophical page with director Bain Boehlke. Phil Ross and Dee Noah are vibrant as a couple who has managed to maintain their optimism despite the pitfalls of aging. Wendy Lehr’s choreography nicely complements the show’s vaudevillian flair.