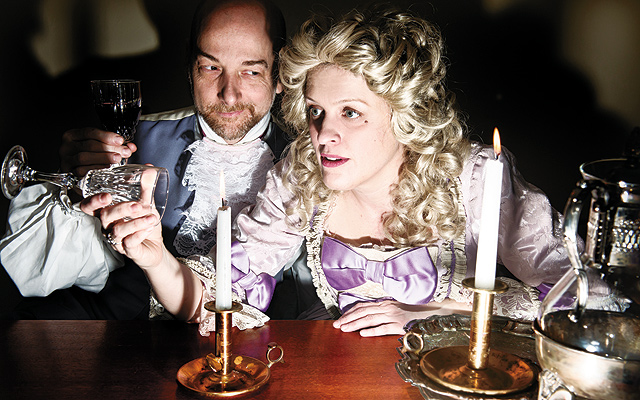 The Age of Enlightenment saw the beginnings of the modern consciousness which would pave the long, rocky road to women’s equality. Theatre Pro Rata shines the light on 18th century French noblewoman, Emilie du Chatelet, who boldly broke ground by being a scientist. Director Carin Bratlie relates: “Emilie (Shanan Custer), was a fascinating woman. Her lover, Voltaire (Matt Sciple), wrote this about her soon after meeting her: ‘You are beautiful / so half the human race will be your enemy / You are brilliant / and you will be feared / You are trusting / and you will be betrayed.’ Everything he wrote about her came true. She turned 18th century gender roles on their heads and pursued science and mathematics regardless of what society said she should do. Lauren Gunderson’s play has a lot of fun with that idea and Shanan portrays her as a person ahead of her time.”

The accomplished Gremlin Theatre will close its doors with a revival of one of the great plays of the 1960s and ’70s era, and perhaps American theater’s consummate work about female-on-female emotional violence. Paul Zindel’s Pulitzer Prize-winner probes the psychosis of a mother who cannot bide her precocious daughter’s brilliance. Jodi Kellogg, a Lavender Magazine Best Actress, plays Beatrice, the mother. It’s one of contemporary drama’s most abusive characters and Kellogg is always a powerhouse so prepare for fireworks.

Director Ellen Fenster points out that “life has damaged Beatrice in a way that leaves her isolated and bitter. While she does her ‘best’ to mother Tillie (Caledonia Wilson) and Ruth (Eleonore Dendy), her anger and regret leak out in volatile, bizarre behavior that runs the risk of damaging her own daughters. Tillie, the younger, is a touching example of the textbook ‘resilient child.’ It is the attention of one adult in her life, her science teacher, that gives her a place to put her energy and hope. She cultivates a tenacious love of science that helps her block out the madness of her home and dream about a bigger, brighter world.”

This display of GLBT artifacts and archival materials are from Ramsey County Historical Society’s Leo Treadway Collection runs during the current Pride season, with another exhibit running in August. Twin Cities Pride celebrations since the 1970s are reflected on with photographs, buttons, clothing, and directories. Treadway, who has also loaned the exhibit some of his own items, shares “it is my hope that not only will GLBT individuals and allies be intrigued by some of the items in these exhibits, but that they will understand the importance of contributing to the archiving of current history. Too often we seem to believe that only items of extraordinary impact or value are worthy of contributing to one of our local collections. The truth is that it is the daily bits and pieces of our individual and organizational lives which really help to document our community and its rich history.” Treadway hopes those who see the exhibits will consider what they themselves might contribute to further document our community history in local collections. 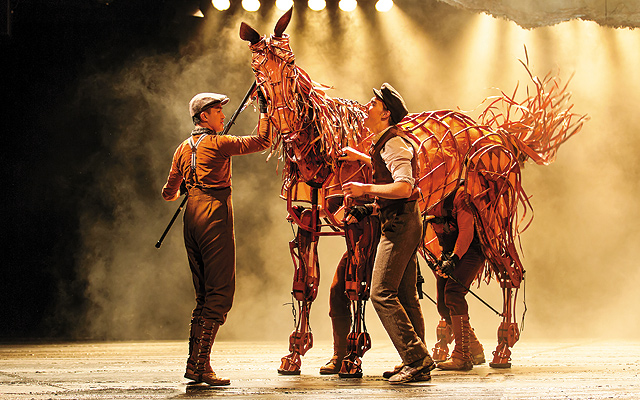 As we approach the 100th anniversary of World War I, War Horse is an ideal choice to commemorate and reflect. It focuses not on the people killed in ‘The Great War’ aka ‘The War to End All Wars,’ but on the horses who met their tragic ends. Boldly unlike most West End, and even more so, Broadway fare, War Horse is drama highly stylized. Protagonist Joey, a horse, is actually a hand-made puppet figure manipulated, navigated, and interpreted by three puppeteers.

Minnesota native Rob Lacqui plays Joey’s hind. He clarifies something about puppeteers: “With any sort of performance art we’re all actors. Our medium is just different. Technically, I’m in the hind. I operate the back, two legs, and the tail. The physical challenge of the work is demanding – to be able to support the weight of the puppet and to support the weight of the rider. Artistically, the challenge is to keep it live, keep it present, keep it real. Additionally challenging: you are on a team with two other people. Every horse team is made up of three separate puppeteer performers.”

Hennepin Theatre Trust President/CEO Tom Hoch says “War Horse will take our audience on an incredibly moving journey of loyalty and friendship between Albert and his horse, Joey. The puppetry that brings this story to life is breathtaking. Within minutes of the curtain rising, you’ll forget that the horses are also puppets!”

The nation’s flagship regional theater has turned 50 and lots of luminaries will be here to celebrate. They include: Whoopi Goldberg; Olivier-winner Tracie Bennett who played Judy Garland at the Guthrie; Guthrie veteran T.R. Knight whose gayness was homophobically slurred by his Grey’s Anatomy co-star Isaiah Washington, and others. Jason Robert Brown (Songs for a New World, Parade) has composed a new work specifically for the anniversary based on content from Shakespeare’s Hamlet. Cantus vocal ensemble will perform. Guthrie legends Sally Wingert (Third) and Greta Oglesby (Caroline, or Change) will host a variety evening dubbed Behold: A Gala Performance on June 22.

Associate Artistic Director John Miller-Stephany, known for his stunning Big G revival of master gay playwright Tennessee Williams’s A Streetcar Named Desire, says “the Guthrie champions diversity on stage and off. I’m delighted that in recent years GLBT voices have been clearly and frequently heard in the Guthrie’s ongoing artistic conversations. A sampling of the plays and artists in the 2012-2013 and 2013-2014 seasons alone include Jon Robin Baitz’s Other Desert Cities, David Goldstein’s Skiing on Broken Glass, Christopher Durang’s Vanya and Sonia and Masha and Spike, Lisa Peterson, Peter Rothstein, Jim Lichtscheidl, Micahel Hoover, Tarell Alvin McCraney, Andrew Cooke, Kelly McAndrew, Rachel Hauck and Wendy Goldberg. It was not by accident that our LED towers proudly displayed the colors of the rainbow on May 14 in honor of this great state’s ratification of gay marriage!”

The beloved GLBTA chorus celebrates its 25th Anniversary with a tribute to Minnesota for nourishing and producing remarkable music. Bass singer Allan Warrior shares “what’s special about this concert is the juxtaposition of the familiar with the unexpected – whether it’s the fond memories of our state fair, the celebration of our choral heritage so warmly and lovingly displayed in O My Love’s Like a Red Red Rose, or the the exotic beauty of Oi Dai and Nalaah – those are from Minnesota! The music speaks to a Minnesota that’s big enough for everyone, which to me, has always been the subtext of our mission – our devotion to building community and creating social change. We are the Minnesota chorus that has never removed the word ‘Mixed’ from its name and it’s come to be one of the primary tools of our efforts to create social change. In concert after concert, we create a musical world that’s appreciative and welcoming of all of us and all our differences, and filled with hope that the real world won’t be that far behind. Despite certain persistent assumptions about Minnesota’s homogeneity, we see in these song selections from composers old and new, the same devotion to this welcoming mindset.”