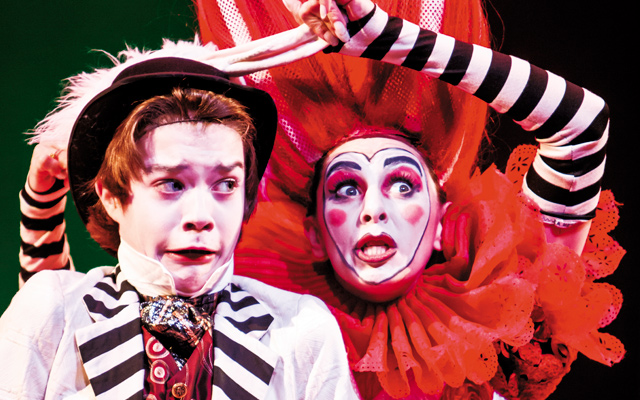 A resplendent example of an alternate reality being conjured right before your eyes on stage. Peter Brosius’s direction and G.W. Mercier’s set and costume designs channel a visionary portal into Lewis Carroll’s classic wonderland as adapted for stage by Sharon Holland. A floor resembling an infinite chess board and the Cheshire Cat’s limbs that enlarge and intrude upon the action from various directions underline the text’s surrealist sensibility. Amidst this madness, Anna Evans is pure perfection as Alice, the rational youthful voice that guilelessly challenges the tyrannical Queen of Hearts and the petty tyrant, Mad Hatter. Evans is exactly what Carroll had in mind.

Red Eye’s annual series, aka Isolated Acts, is always the place to be for cutting-edge performance work. Week one (May 30 – June 2) has a grouping of short works that includes a solo dance entitled Discrete Convolutions that contains queer content by Sam Johnson. In Week Two (June 6-9) Nick LeMere gives us big dresses and pretty men in non-stop choreography. He & Him/She & Her is said to be a flamboyant movement journey – a perfect fit with its wedding themes as we celebrate Marriage Equality in Minnesota. LeMere, a po-mo homo and fashion stylist, is supported by dancers Luke Melsha, Chris LaPlante, and again, Sam Johnson. Isolated Acts is perhaps the best showcase for new innovative performance work in the Twin Cities. Johnson and LeMere provide a lovely way to launch the Pride Month spirit!

Evel Knievel was a motorcycle daredevil who enthralled the world in the 1960s and ’70s. Erik Hoover and Kym Longhi draw from concepts made accessible by mythology expert Joseph Campbell. A series of motorcycle jumps springs into Campbell’s ‘monomythic’ ideas about how a hero will spring into the collective (un)consciousness at the point he or she is collectively needed. Indeed, the late ’60s and ’70s are noted by many for corruption and nihilism.

Hoover, one of the region’s top physical actors, shares: “The term ‘monomyth’ basically refers to the structure that human myths follow: Departure. Initiation. Return. The hero is called to adventure and is tested before they–if they survive–return to their tribe with a Boon. It’s the basic story that humanity endlessly tells itself. We use this life/death/rebirth cycle as a framework for the arc of the show, but each jump Evel makes is a cycle within the greater one: the hero leaves the earth, either lands successfully or crashes, and is changed by the experience. Herocycle takes place in Evel’s mind while in a coma state, a liminal space between life and death, where the cycle endlessly repeats forever.”

Longhi adds, “It’s about being alive, sometimes even painfully, and having the guts to make mistakes in pursuit of that thing we call ‘our bliss.'”

Puccini’s timeless opera was the inspiration for the musical Rent and celebrates the bohemian energy that catapults art and consciousness into new dimensions. It’s a great choice to celebrate Minnesota Opera’s half a century of terrific work, both classical and innovative. Artistic Director Dale Johnson reflects on the past season: “The three performances of Puccini’s La Boheme in the Twin Cities area and Faribault cap off a brilliant year of opera. The opening peformance of Nabucco, with its homage to production style of the mid-19th century sets the tone for the exploration of opera, old and new. Anna Bolena winds up the trilogy of the Tudor Queens by Donizetti, and Doubt electrified audiences with its intriguing exploraton of certainty. Hamlet was a bravura producton featuring an equally bravura performance by Brian Mulligan and Turdandot caputured the epic quality of Puccini’s last opera with color and brilliance. Just as Minnesota Opera celebrates 50 years of great performances, we also salute the Minnesota Legislature for its brave step in instituting true equality here in Minnesota.”

East Central Minnesota Pride wants everyone to come on out and up to Pine City for an extraordinary line-up of music talent. Co-organizer Nathan Johnson says, “We plan to honor and recognize those present who intend to marry. We will celebrate the new law following the performance of Nobody’s Weddin’ because this is now ‘Everybody’s Weddin’.’ Every couple will receive recognition and a flower. We thought this would be a great addition.”

You can also catch headliner singer extraordinaire Chastity Brown who hails from Tennessee and has built a huge following in Minnesota. She is compared to such greats as Leadbelly, Nina Simone, Bonnie Raitt, and Roberta Flack. Johnson’s fellow organizer is Louisa Hext, who you recall has been a great organizer in the Twin Cities for queer and arts events, so you know the Pine City event will be something extra special. Let’s drive on up!

Now that Marriage Equality has been won in Minnesota, it’s time for healing. A perfect common ground is MIA gallery 344. Conservative Christians who have come to only see gay and sexual issues as the overriding concerns and GLBT activists and allies who have been single issue-oriented for the past few years should all agree with Christ’s call to care about the poor and needy. And no, I’m not saying you must be a Christian but it’s important for any civilized citizen to remember that call. Picturing Poverty uses The 30 Years War (1618-48) as a springboard into Christian Europe’s own call to deal with the subsequent poverty thereof. Striking etchings stress the humble, impoverished aspect of Jesus’s own life with his own birth in a stable, circumcision in the stable, the adoration of the shepherds, and the flight into Egypt–refugees, of course, being automatically poor. From this charitably Christian base, other, mostly 17th century works, focus on commoners rather than the monarchic and aristocratic representations that tend to dominate much of classic European painting:  Cornelis Bega’s The Amorous Couple, Jacques Callot’s haunting series of war, poverty, and social destitution disturbs with images: a firing squad (did someone steal a loaf of bread?), a crudely equipped hospital, beggers, and last rites. William Hogarth’s mid-18th century Gin Lane seems to indict the social system that perpetuates poverty while at the same time cautioning of the wages of debauchery: A barebreasted drunken woman has just dropped her baby, a man tussles with a dog over a bone, a barebreasted woman lies in a coffin, a tortured child is shown. Baptiste Stouf’s moving sculpture of Apostle of Charity St. Vincent De Paul with dead babies at his feet returns us to Christianity’s legacy of anguished compassion. A corrective exhibit that both sides of the marriage debate can now lay down their arms for…and perhaps be allies. Poverty and homelessness are detriments to social harmony as these Baroque artists well knew. 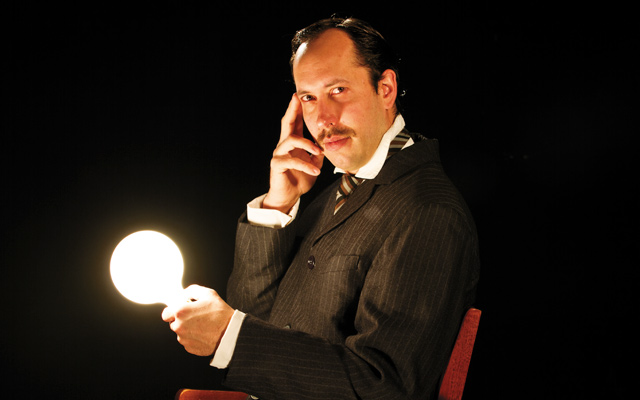 Writer/director Josh Cragun’s engaging stage docudrama outlines the conflict between scientific innovator Nikola Tesla and capitalist financier demagogues like J. P. Morgan. Tesla’s insights about robotics, wireless technology, and outer space were socially unacceptable, though in recent decades it’s clear that he was onto something phenomenal. Cragun clearly views him as man against the power structure and Zach Morgan’s title role performance reflects that poignantly. Heidi Berg’s delightfully gruff crossgender turns as J. P. Morgan reminds us just how powerful a single man’s arrogance can misguide a whole economy. History buffs will find much to admire and dispute in Tesla.

Theater NOW revives Jeff Baron’s acclaimed mid-’90s award-winner with Robert Marcus as Green and Tom Glaser as Ross. American GLBT citizens and allies have become so accustomed to thinking of homophobia as a conservative Christian problem, when, as Baron reminds us, it’s a Jewish community problem too. Marcus reflects: “Mr. Green is a lost, lonely, and deeply orthodox Jewish man, 86, recently widowed. He is rooted in the traditions and laws of his faith. Mr. Green comes face to face with the modern day realities and sensibilities that threaten his lifestyle, his faith and his family. The traditions, rules, and laws of his faith, once the backbone of his family and his life, are now exposed to the modern social lifestyles which he cannot and will not accept. And through his new found caretaker, Ross Gardiner, the hip and professional modern man, Mr. Green must face his own moral judgements by witnessing and experiencing the deepest loss from his own life and the long struggle he must face to forgiveness.”