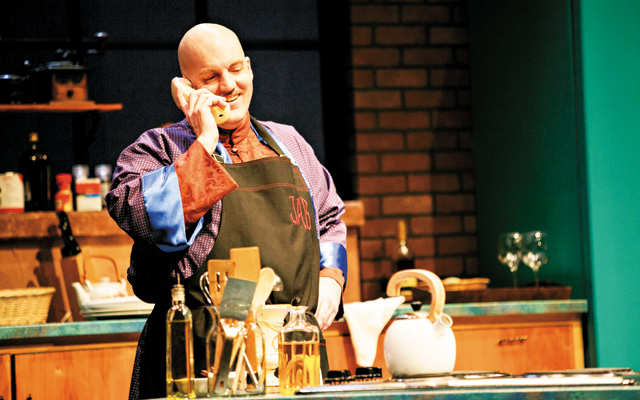 I Love to Eat: A Love Story With Food. Photo by Lauren B. Photography

Garry Geiken’s solo portrayal of legendary chef, James Beard, is a gentle low-key revelation that will surely make you hungry as you watch him prepare some of the character’s specialties right up on the Illusion stage.

James Still’s conversational script is matched nicely with Michael Robins’s fluid directorial approach. The monologue seems to blossom as it flows along: Beard’s dreams of singing opera, his 1946 television cooking program, his matter-of-fact way of relating his preferred attraction to other men, and of course, his friendship with Julia Child. The wonderful Geiken reveals Beard’s insecurity about his body image and how he yearns to love and be loved by another man, with moving understatement.

Playwright Crispin Whittell adapted 19th-century Englishman Charles Dickens’s A Christmas Carol for the Guthrie and he returns to the same century and theater with a vibrant adaptation of Russian Ivan Turgenev’s novel, Home of the Gentry. Titled The Primrose Path, it muscularly portrays the foibles of rural Russians of means and their intractable marital codes wherein divorce was unthinkable. Some marriages were arranged and could be miserable for both parties.

When Lavretsky (Kyle Fabel) returns to his family’s rural estate from Paris, after having left his licentious wife, he swiftly falls in love with innocent young Elizaveta (Suzy Kohane). Unfortunately, hierarchic Russian social codes are as suffocative as Paris high life was reckless. Nonetheless, Lavretsky gets a panicked urge to marry her.

Kohane’s performance is capable but its lack of fullness shows in Elizaveta’s ironically fascinating and absurd speech about convent life facilitating freedom for women. That indoctrinated infantile myth is passionately punctured when her aunt Martha (a terrific Candace Barrett Birk) counters with a gritty description of what convent life is actually like.

Director Roger Rees’s crisp staging is enhanced by Sally Wingert and Hugh Kennedy in delightful performances as two gentry types–one congealed in controlling her household, the other congealed in vanity. Ann Michels dazzles and mesmerizes as a mysterious lady from St. Petersburg. Jeff Croiter’s sensual lighting at times seems to massage the actors.

There are a few weak links. A Gregorian-style chant opens the production setting on an ominous tone rather than one of the comedic brevity posited by the script. Rees and movement coach Marcela Lorca could have been more imaginative with the nonspeaking servant roles. They are played for cutely benign comic relief. We are meant to laugh when they are tyrannized by the gentry characters. The play is set less than 20 years before the serfs were freed, so they would have been a class headed for a tipping point. Cute is not appropriate or accurate. 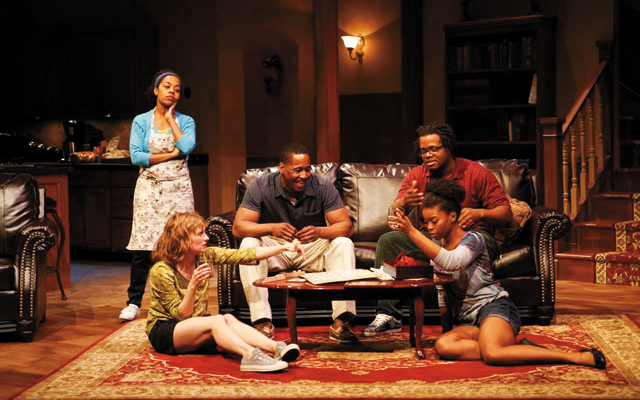 The skeletons of a wealthy, entitled, African American family come out of the closet with a vengeance in Lydia R. Diamond’s masterful human comedy, Stick Fly. Two brothers–insecure younger Kent (Darrien E. Burks) and narcissistic older Flip (Darius Dotch)–bring their sweethearts (Traci Allen and Tracey Maloney) home to meet their parents. But the mother never shows up. However, the father does. He is celebrated neurosurgeon Dr. Joe LeVay, played with swift incisive cruelty by James A. Williams. He has turned emasculating Kent into mentally sadistic sport.

In the kitchen, Cheryl (Brittany Bradford), the daughter of the maid who has called in sick, is substituting. A young black woman, she waits hand and foot on the black men and their ladies as if it was an aristocratic household. But then that is what it is, as Diamond shines the light on the power elite of present day African American aristocracy. You expect a Rice, Condolezza or Susan, to call up the LeVay’s Martha’s Vineyard cottage to see if anyone wants to meet for cocktails. Diamond grants us privileged entry.

What unfolds is a blisteringly funny reflection on gender and race theory, etymology, and how abruptly and glibly human dignity can be corroded and debased. And you needn’t have any background in any of these subjects to enjoy the show. Director Marion McClinton’s riveting cast penetrates their characters to the core like few ensembles in recent memory, inhabiting Diamond’s ingenious observations of family dynamics.

Whether you think some parts are predictable is beside the point. It’s how each character processes (or does not process) events that unfold. Honest broker Diamond never lets race or gender concepts off the hook though–she’s evenhanded throughout. Even the play’s most sympathetic figure, Cheryl, doesn’t get a totally free pass. But when everyone’s projections seem to come to bear on her, Bradford’s performance will simply break your heart.

In the 1990s, musical theater titan Andrew Lloyd Webber shaped the 1950 Billy Wilder film classic, Sunset Boulevard, into one of the biggest and most expensive stage musicals ever. Christopher Hampton and Don Black wrote the lyrics and script in which Norma Desmond, a silent film star has-been, deludes herself with dreams of a comeback. Gloria Swanson’s portrayal is among the most legendary of Hollywood history: “Mr. DeMille, I’m ready for my close-up.”

The ’90s reviews of the musical were mixed. Critics raged against the expense and overproduction and that too many movies were being adapted into stage musicals. But uproar aside, it’s actually a damn good musical that can work without the excess, so that’s why Minneapolis Musical Theatre and Hennepin Theatre Trust’s revival with Sarah Gibson as Desmond is of keen interest.

Director Steven Meerdink says “Obviously, we are not building a large scale opulent Hollywood mansion in the New Century Theatre. Since the show is a memory piece, Norma is remembering the events of the last several months from the mental institution in which she has been placed. We will be using projected images to assist in establishing different settings , as well as a live camera to play into the idea of film. The costuming will also be from her memory, so we get the fabulous film style costumes. I truly think that placing the show in a smaller venue not only brings the audience physically closer to the actors but places a greater emphasis on the characters and their entangled relationships. With this setting and approach, the whole musical becomes a more psychological piece of theatre.”

William E. Jones is known for his fascinating assemblages of film imagery pertaining to gayness and geopolitics. He has also curated a nostalgic but penetrating grouping of short films from the turn of the last century in the Walker Art Center’s Lecture Room. As seen through the eyes of Jones, France’s groundbreaking Lumiere Brothers, Auguste and Louis, are a solid resource for the uber-masculine: divers in a Milan swimming pool whose almost naked male bodies boldly contrast heavily dressed and hatted women in corsets. Freedom v. repression. German Hussars jumping fences. A Hungarian military review. Two men in a pie eating contest wherein one attempts to eat crust and berries off the other’s face with aggression and affection.

But the showcase’s most extraordinary offering was shot by American icon Thomas Edison. It’s simply and profoundly an extended shot lasting for several minutes from a camera apparently mounted on a city streetcar. As it runs down the track–and you, the viewer, with it–we see motorcars regularly overtaking horse-drawn wagons. Pedestrians dodge in between streetcars and vehicles like kangaroos. DO NOT LEAVE WHILE YOU ARE WATCHING! Just be with this rail trip. You will feel utterly transported to a different era. The overall effect in watching it is stunning and for some will be Zen-like. It is a haunting viewing experience that has a primary sense of the majesty and the squalor of American urban life a century ago.

Two other mind-blowing pieces show an actual train crash with men in hats running to the damage and a woman singing the Star Spangled Banner in sign language for the deaf.