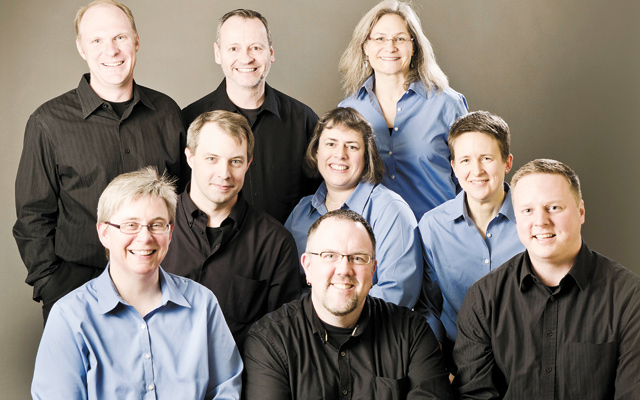 The inclusive Caritas Vocal Ensemble is an a capella group that gives 85% of its proceeds to various charitable organizations. The 2013 season, now in full swing, is entitled Give Good Gifts. Singer Kristen Frost-Tibben has sung for eight of the ensemble’s 12 seasons. She points out that “the group is small, only nine singers, so we’re able to connect with the audience in a way that larger groups cannot. But the best part is that our concerts raise money for other nonprofits, mostly small organizations based in the Twin Cities. Since our group started we’ve raised over $120,000.”

Singer Liz Stanley shares “I enjoy the variety of music that Caritas performs, from standard choral repertoire to less familiar works. I especially like the jazz in our repertoire this year, which is challenging to sing, and it’s really fun to see how much the audience enjoys it. I’ve always preferred singing in smaller groups, which really puts a lot of responsibility on each singer and makes the repertoire that much more interesting to perform since we’re often singing one on a part. It’s a great mix of people who work well together both musically and personally.”

This season’s selections range from Renaissance to jazz and includes composers such as Thomas Tomkins, Maurice Durufle, Charles Villiers Stanford, and Stephen Chatman. Mark Hiemenz adds “I love singing with Caritas because we make beautiful music for great causes, and because it is a super, simpatico group.”

Columbinus is Blank Slate Theatre’s response to the school shootings that have become all too commonplace in recent years. Until Sandy Hook there was an odd silence every time such shootings transpired, rather than public outcry and the reasonable moves toward gun regulation that are finally being discussed.

Moreover, shootings, mass and otherwise, are being revealed to be a major killer of Americans of all ages. And the Boston Marathon bombings, like many of the shootings, have to do with disaffected young males who, for reasons we’ve not yet settled as a culture, continue a pattern of violence. That’s why ongoing serious discussion is needed.

Blank Slate Theatre is perhaps the area’s most willing youth theater to discuss controversial issues, so you knew it was likely to cover this most touchy of subjects at some point in the near future. The play, by Stephen Karam and P.J. Paparelli, suits their style as it involves  discussions with parents, survivors, and community leaders. It’s a style that brings to mind the Tectonic Theater Project which gave us The Laramie Project.

Director Adam Arnold observes “events like the 1999 shooting at Columbine High School are still happening today. Following the massacre at Sandy Hook Elementary this past December, we at Blank Slate Theatre quickly moved to do a play about school shootings. We felt we had to do something.” While exploring the subject of violence in schools it meditates on the meaning of, as Arnold puts it, “what it means to be an adolescent.”

The new Actors Equity theater group, Theatre Now, is presenting the area premier of the New York Fringe Festival hit by Andrew Hobgood and Evan Linder. The officers of the Susan B. Anthony society for the Sisters of Gertrude Stein prepare for their annual vegetarian quiche breakfast. The actresses playing this group’s madcap officers are Beth Desotelle, Andrea Wollenberg, Anna Hickey, and Erin Mae Johnson. They sport the classically codified ’50s ‘ladylike’ look, coiffed and accessorized with pearls and gloves, but they share some deep dark secrets that we don’t typically think of when we think of women of that time.

When these society ladies end up in a civil defense bunker erected by Building and Grounds Chairman Veronica ‘Vern’ Schultz (Dawn Brodey) for an atomic Test Drill, submerged thoughts surface. Director Shelli Place calls the women a “plucky quintet that brings to life characters from the conservative Cold War world of 1956 – where ‘duck and cover’ was a household phrase and ‘form and demeanor’ meant everything – although fearful, they remain steadfast in their congeniality!” 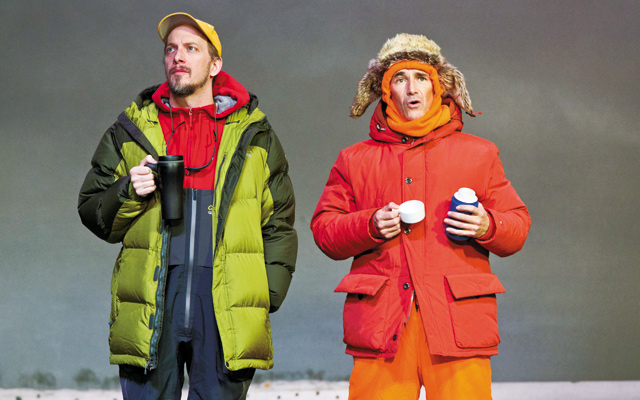 If one were to imagine a folkloric tale centuries ahead about our own present day, Nice Fish might well qualify. Co-playwrights Louis Jenkins and Mark Rylance have spun numerous poetic passages -many of which can stand on their own at a poetry/prose slam- centered on two buddies on a frozen lake at the close of Minnesota’s ice fishing season. Todd Rosenthal’s set is a simple floor that resembles the lake and a vast expanse of sky that sometimes seems to overpower the action. But perhaps that’s the idea.

Rylance and Jim Lichtscheidl play Ron, who says everything that comes into his mind and Erik, who is reserved and contained. When bikini beauty, Flo (Emily Swallow) and her territorially macho boyfriend, Wayne (Chris Carlson) show up in a zany ice house and on a snowmobile, an element of the sensual and the primitive seep into the picture. Tyson Forbes as a contemporary but rustic fiddler named Wainwright and Bob Davis as a demeaning DNR (Dept. of Natural Resources) officer round out this oddly original comedy co-directed to magical effect by Rylance and Claire van Kempen. Though the show could lose 20 minutes, it remains wondrously entertaining with a breathtaking ending. Van Kempen’s music is nicely evocative.

Nic Lincoln is one of those great dancers of the James Sewell Ballet. So you know he’s topnotch just to be part of that glorious group. But you have a chance to see him dance solo as choreographed by some of the best female choreographers around at the TEK Box space at the Cowles/Hennepin Center for the Arts. He says he will definitely be expressing both his gayness and his love for women. Lincoln explains “as a gay youth I had a rough and challenging childhood, and now I want to provide the current GLBT youth with an artistic role model. I drew inspiration from this show from the number of ankle/foot surgeries that I had between November 2009 and May 2012. During my recoveries I linked female support in my life with my history as a gay man. I then began to commission work by amazingly talented female choreographers. As an artist and activist this project is a direct connection between dance and Outfront MN’s vigorous action and support for GLBT youth. Outfront MN will have a presence at every show and I have also invited a youth who has benefited through Outfront MN’s guidance to speak about their life experience during my show. This project is important to me, not only because it is an artistic challenge, but because it will connect dance with public awareness of GLBT culture.”