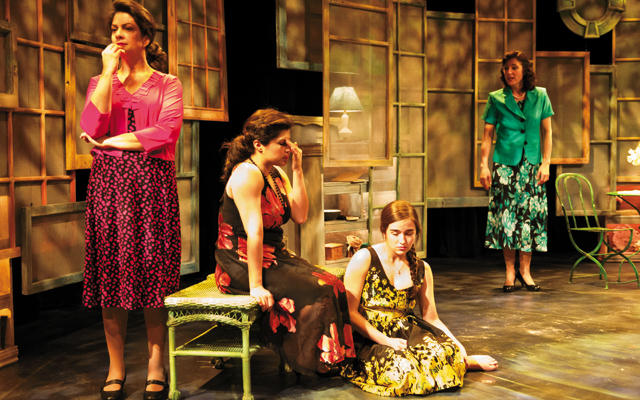 In the Time of Butterflies. Photo by Rich Ryan

Rafael Trujillo aka El Jefe (Boss, Chief) is among the gallery of ultra-right-wing dictators who ruled their respective Latin American countries with an iron and atrocious fist. His bloody, paranoid reign over the Dominican Republic in the mid-20th century, targeted and victimized thousands suspected of Marxist sympathies, real and imagined.

Mixed Blood Theatre has staged a poignant and passionate In the Time of Butterflies inspired by the true story of the four Mirabal sisters who met their fate at the hands of Trujillo’s regime. Despite static stretches in Caridad Svich’s playwriting, director Jose Zayas’s exquisite cast explores the tragic innocence of four young females who were actually varied in their political views, but ultimately helpless against fascistic zeal that made dissidents or anyone who appears to be dissident, disappear. Adapted from the book by Julia Alvarez.

In 1935 Lillian Hellman courageously addressed the evils of lesbophobia in The Children’s Hour. Jewish, straight, and extraordinarily perceptive about the subject, the greatest classic American female playwright wrote a masterpiece that still thunders 78 years later. Just look at how elected officials in rural counties of both major political parties chafe at pursuing GLBT rights.

At the Sabes Jewish Community Center Stephanie Cousins and Danielle Siver play Karen and Martha, two teachers targeted by vindictive gossip. The production’s director, Anya Kremenetsky, shares “While the central theme of The Children’s Hour is the destructiveness of lies and gossip, Hellman chose a very specific lie to base the story around. The play is a chilling glimpse into societal attitudes toward homosexuality in the 1930s, yet it still resonates in 2013. The accuser, Mrs. Tilford (Diana Wilde) says of the two women “What they are may possibly be their own business. It becomes a great deal more than that when children are concerned in it.”‘

Siver elaborates “Martha and Karen are ruined by the spread of gossip specifically because the rumor involves homosexuality – the students at the school are immediately removed, it is implied, for their safety. Lesbianism is not only seen as a sexual deviance, but is implicitly linked with child abuse. And sadly, it doesn’t end there. The public abhorrence pervades the private, internal lives of the women themselves. This is what is ultimately so heartbreaking to me – beyond the destruction of their livelihoods and places in the community there is a profound loss of innocence. Shame creeps in and overwhelms them both, tarnishing their friendship and forever stunting their capacity for happiness.” 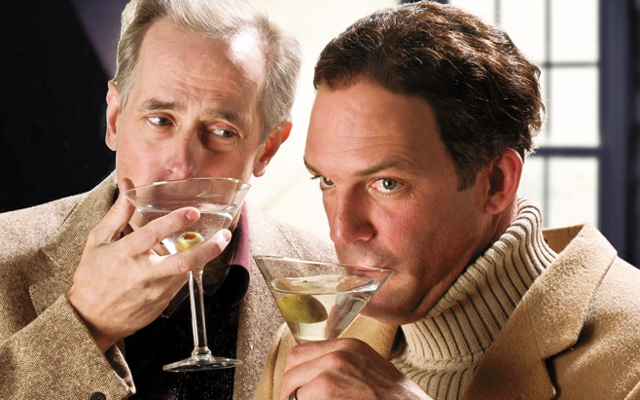 When Deathtrap hit Broadway in 1978 much was made that its two main characters were partners in writing, crime, and love. Therefore, Ira Levin’s mystery thriller was a kind of ground-breaker, though its gay representations were not of the ‘positive image’ ilk that the era’s activists liked to tout. By the way, positive images are not necessarily always honest. Bear in mind that that mentality would have foolishly scrapped the great film, Brokeback Mountain. At any rate, the dextrous script penned by the Rosemary’s Baby and The Stepford Wives novelist keeps you guessing about the murderous intentions of the couple. There’s also a flamboyant clairvoyant named Helga played with loopy zest at the Jungle by Claudia Wilkens.

Steve Hendrickson and Michael Booth play partners Sidney and Cliff. Their expert timing accommodates the play’s surprising twists and turns so if you like a good thriller you’ll be well satisfied. However, the pair and director Bain Boehlke could have developed the romantic undercurrents between the men. They come off more as just work associates than lovers. Granted, Levin doesn’t give much but it could and should have been explored. That said, it’s a jolly good time! Note: Deathtrap ran a whopping 1,809 performances on Broadway.

When homoerotic desire is interwoven with homo-romantic love, it subverts engrained machismo. Moreover, a woman director/writer, Sally Hosaini, has created a penetrating examination of that in her stunning debut feature, My Brother The Devil.

GLBT people and allies who vacuously parrot that if only everyone would just ‘come out’ our problems would subside need to make a beeline to this film and wise up. And those who still wax wondrous about director Kathryn Bigelow after her overrated Zero Dark Thirty need to tap into Hosaini who actually knows the cultural landscape that Bigelow distorts.

Rashid (James Floyd) and his younger brother Mo (Fady Elsayed) are British-born, of Egyptian-Muslim heritage, and are puppets of gang members. When Rashid’s personal evolution makes him aware of things beyond his East London ‘hood’, it discombobulates Mo. Moreover, Rashid’s life tailspins as his weed client Sayyid (a compelling Said Taghmaoui) comes on to him. At that moment, the homoerotic/romantic wrench is thrown into the violent works of gangland machismo.

Floyd and Elsayed are both maddeningly lovable. Hosaini’s ear for and perception of the mileu is intensely scrupulous. She’s a woman who deeply, deeply understands the macho male psyche. Hosaini brings to mind female playwright Lillian Hellman who also possessed distinctive insight about masculinity.

In addition, Hosaini knows how to lay on just the right balance of gun-toting and violence. In this sense she brings to mind Spike Lee. My Brother The Devil has been legitimately compared to the terrific ’80s cult classic My Beautiful Laundrette but it’s its own phenomenon to be sure. It speaks to directly and viscerally to our present time. Though it’s from the UK, remember that they too have been under the lion’s paw of that elusive thing we Americans refer to as The War on Terror.

Once again there are some GLBT films at the MSP International Film Fest that you will want to consider. Director Melissa Koch will speak in person after a screening of her The Infamous T, which deals with homeless youth and bullying. Director Xavier Dolan’s transgender romance, Laurence Anyways, hails from Canada. In The Parade gay activists in Belgrade form an unlikely association with a crime boss. Born This Way is a terrifying window into homophobia in Cameroon. Bwakaw features Filipino superstar Eddie Garcia as a man in his 70s finally coming out. These films are a great opportunity to get in touch with how queer issues are shaping up around the planet.