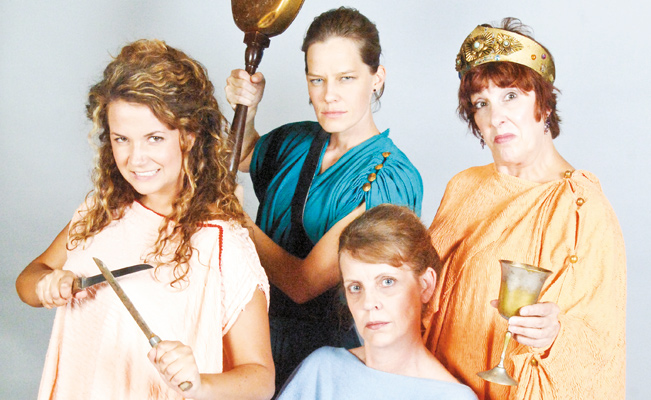 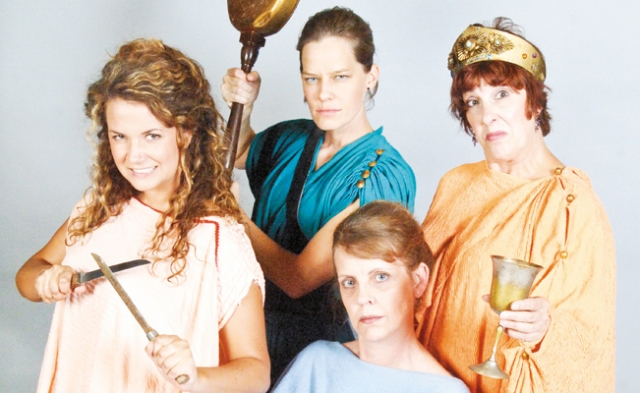 When it comes to comedy from ancient times, Aristophanes’s Lysistrata is arguably the most popular and accessible for modern times. It tells the outlandish story of Athenian wives withholding sexual relations from their husbands until they stop fighting the Peloponnesian War. 2011’s Theater Artist of the Year, Craig Johnson, adapted and directed the play at Theater in the Round in 1992.  He shares, “It was my first directing gig at TRP and really fun to re-visit the show exactly 20 years later. Jean Williamson is again playing the lead (Lysistrata), and Kristen Mathisen is the leader of the female chorus, but everyone else is new. So that makes it very fun to rediscover and keep fresh.”

Johnson adds, “It continually amazes me that a story written 2,500 years ago still works. And since it’s a pre-Christian script and from such an ancient, far away society, it’s surprising how sexually rambunctious it is. They set their boundaries at waaay different places that we do. It’s actually liberating to inhabit that world.”

For those concerned about the focus of many members of the African-American community who do not support marriage equality, be aware that Tarell McCraney is a 30-ish, gay, African-American playwright who clearly lights the way to a brighter future. His acclaimed The Brothers Size has opened as a Pillsbury House/Mt. Curve Production at the Guthrie’s Dowling Studio. And brother, does it crackle!

McCraney has written a sort of seemingly non-erotic love triangle between two brothers and a buddy that one brother bonded with in prison. Auto mechanic Ogun (James Williams) habitually shames his younger brother, Oshoosi (Namir Smallwood) about his checkered past. Oshoosi’s prison friend, Elegba (Gavin Lawrence), tries to draw Oshoosi away from his brother’s apron strings.

Marion McClinton’s superb actor trio manifests the hard-hitting, lyrical language as they match the emotions with deep feeling and sardonic wit. This is the second in McCraney’s Brother/Sister Trilogy and frankly, it’s far superior to the first installment, the overrated In the Red and Brown Water, in which McCraney evoked images of women one would not expect from a thoughtful gay playwright. But with The Brothers Size, he knows what he’s writing about, and he has written it beautifully. Also, you don’t need to see the previous show to understand this one. The Brothers Size stands on its own.

Moreover, how refreshing to see a gay playwright reflect on men’s issues and not just gay issues. Decades ago, many gay-identified writers and their readers/audiences got so caught up in identity politics of their own and their allies that they misplaced their capacity to understand men in general. Not the case with McCraney, and it’s splendid to see that reclaimed.

Indeed, though there are a few moments that can be read as homoerotic in the play, it’s not a “gay play.” McClinton says it “speaks to all levels of love between black men and its possibilities.  Also the fear that love creates when the fullness of those possibilities become known. These are men struggling to be in control of their own lives and trying to understand what that control means.” 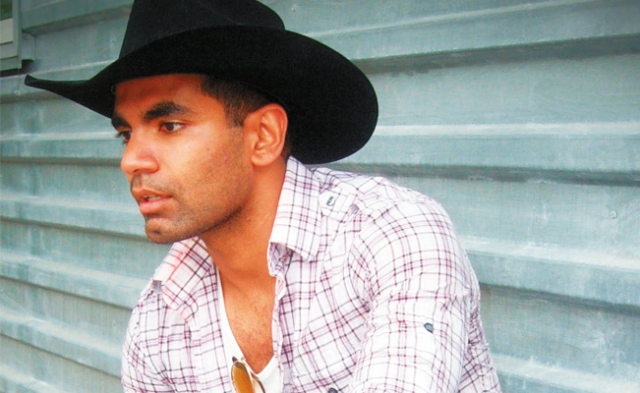 Tracy Letts is best known now for his magnificent milestone stage comedy, August: Osage County. But in his first play, Killer Joe, we see the beginnings of great and courageous playwright. Director Justin Kirkeberg calls it “a world view of fractured people, people with an intimate relationship with desperation and poverty who make decisions based on what is right in from of them with little attention to the consequences. The Smith family are all broken individuals and are the exception to the rule that the whole is better than the sum of its parts. The Smiths feed on each others’ weaknesses, using them to exploit each other and position themselves for a better outcome that never arrives. Then comes the gun for hire. His quiet calm seems to starkly contrast with the Smiths. But we find that his calm is a mask that covers an even darker core.” Lijesh Krishnan plays Killer Joe Cooper.

Playwright Anne Bertram has a visceral sense of women’s history, whether she’s writing about ax-murderer Lizzie Borden or the background to the novel, Frankenstein. Her latest focuses on Grace Roe (played by Jennifer Kudelka), who Bertram relates “was the fourth in line for chief organizer of the Women’s Social and Political Union, the militant suffrage organization in England. Grace ended up in charge after a police raid on the WSPU offices in 1913. I chose her story because she was the one who decided to create the bodyguard. Up to that point, WSPU  had drawn a very clear line: they did violence against property, smashing windows and so on, but never against living creatures. ‘Not a man, woman, child, cat or canary’ as one of them said. They were the objects of much violence, from police beatings to force feeding in prison, and they used this to stoke public outrage, expecting that, with enough outrage, the public would force the government to give women the vote. Grace Roe decided to start resisting abuse—to protect the leaders from the police, even if this meant hurting other human beings. What drove her to that decision? And what were the consequences? That was the story I wanted to tell.” 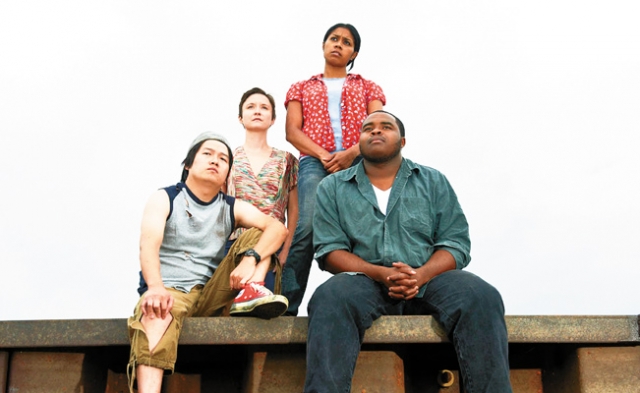 The Way of Water. Photo by Tony Nelson

The 2010 Deepwater Horizon aka BP Oil Spill was a technological cataclysm that some will say is on a par with the hyper-publicized Twin Towers 9-11 horror. But BP’s wrongdoing is far less etched into American consciousness. Yet in reality, it was utterly monumental in its devastation—ecological and economic. And for those who like to cut off dialogue on such horrors with ignorant and/or cowardly invocations of ‘”conspiracy theory!”, corporate interests that lead back to Dick Cheney’s interests are a part of this dreadful chapter in American ecological history. (Look it up!) That chapter needs to be read, humanized, and revised and Frank Theatre is aiding us in doing that with The Way of Water.

Director Wendy Knox says the play “is about people who are already struggling to make it, people who are already battling issues related to class, to racism, etc. The BP oil spill disproportionately affected this group of people. And as we watched Hurricane Isaac hit the very same area that Katrina hit seven years ago and think about the fact that between those two natural disasters was an environmental disaster resulting from corporate greed, you have to remember what these people have been through. And Caridad Svich, the playwright, asks us to do that as she spins the engrossing stories of four characters attempting to make their living in a small gulf community.”