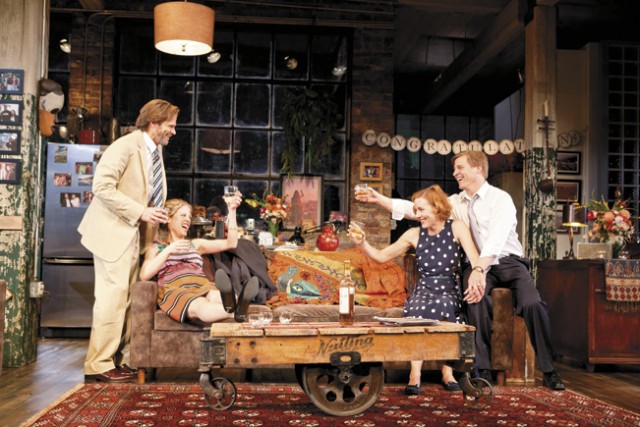 (1) Re-assess and then re-navigate your life at midlife or stay on the same course? (2) How can Americans rationalize turning their backs on suffering throughout the world when we are supposedly the only superpower? These two profound questions permeate the discussion playwright Donald Margulies offers in this engaging comedy-drama.

James (Bill McCallum), a journalist, and Sarah (Sarah Agnew), a photographer, have been together and covered global hot spots since they were young adults. Adrenaline, curiosity, courage, and spartan staminas have long served their on-the-go lifestyles. But when Sarah is severely injured by a roadside bomb in Iraq, the nonmarried but committed couple re-examines their lives in a New York flat while she convalesces.

When publisher and longtime friend, Richard (Mark Benninghofen) arrives with his classically beautiful, much younger fiance, Mandy (Valeri Mudek), Sarah and James chalk up the intergenerational relationship as a symptom of Richard’s midlife crisis. But are they being unfairly judgemental about intergenerational love relationships?

Pulitzer Prize-winner Margulies has us reconsider social judgements toward such relationships, especially when the man is much older than the woman. That said, he also thoughtfully considers that there can be drawbacks to such pairings.

Unfortunately, thoughtfulness deflates when he weighs Mandy’s apoliticism against Sarah’s consciousness, and makes them seem co-equal in value with Mandy actually getting the benefit of the doubt. Sarah is written at a pitch between irritable and irate. Mandy, angelic and unquestioning. It’s a bit galling.

Mandy emotes and minimizes “There’s so much beauty in the world. But you only see misery. Both of you.” So take that into consideration when you read Margulies’s rather pompous notes from his This Be Art reprinted in the program. Ironically, the program includes fine comments by Pulitzer Prize-winner Chris Hedges, whose life itself answers Mandy’s mawkish query.

On the plus side, James and Sarah wrestle with the problem of loving one another while having grown apart in ways that are just surfacing. In our time when people are living longer, more middle agers, realizing they may well have 30 or 40 years left ahead of them, are opting for separation. Can James and Sarah discover a new mutual path as they now go into their middle years? This is the area where Margulies does well, and on this point his play is timely.

Director Joe Dowling’s cast plays their roles with natural ease, finding nuance and humor. One problem: Agnew’s injury makeup application stays the same throughout, despite the fact that the action occurs over several months. In reality there would have been some healing.

When we think of the victims of the McCarthy Era, they tend to be white or Jewish. But African-American writer-across-the-genres, Langston Hughes, was also targeted. Like many of his fellow targets, he was an artist, and right wingers, religious zealots, and fascists are very savvy about the power of art in deconstructing myths that authoritarians want kept intact. Artistic expression must be limited because it is often layered, complex, nonlinear and innovative. Recall that in the late 1980s and early ’90s it was the ultraneocon GOP Senator Jesse Helms who declared ‘Culture War’ on what he saw as an overly permissive National Endowment For The Arts (NEA). (Homophobia, by the way, was intrinsic to that. In service of the conservative slur, ‘commie-pinko-fag’.)

Indeed, 40 years after McCarthyism proper Helms and his ilk were still derisively bouncing the terms ‘communist’, ‘socialist’, ‘collectivist’, and ‘Marxist’ to define whatever idea/concept they might threatened by, whether those terms applied or not. (And likely they did not.) The same stigmatizing terminology is tossed around daily by Republican demagogues like Rush Limbaugh, Congressman Allen West (an African-American), Sean Hannity, and hundreds of right wing radio shock jocks who outnumber their American airwaves left wing counterpoints ten to one. Such terms automatically massively demonize unless the public is informed, educated, and dis-indoctrinated otherwise. Moreover, recall that Hughes was a black man in the ’50s when ‘negro’ was the operative defining term, hence, could be even more deeply marginalized by McCarthyistic terminology than his white and Jewish co-targets.

Playwright Carlyle Brown has focused his speculative drama on Hughes’s natural way of expressing who he was as a black man who resisted commercial servitude to white hegemony’s comfort zone. He says “I see him as my predecessor who has left a legacy of literary and social activism that is synonymous with the history of African-American literature. His legacy reminds me of my purpose and encourages me to focus on my own place in the literary lineage that he and other African-American writers have forged for us.”

The workshop production of Are You Now… at Pillsbury House in ’08 was a knockout, but now that its getting staged at Dowling Studio by the same director, Noel Raymond, it’s apt to be even better given more rehearsal time and designers for set, costumes, lighting, sound and props. Gavin Lawrence reprises his powerhouse lead performance along with some of the same great House UnAmerican Activities Committee (HUAC) performances from before. John Middleton of the original staging and newcomer Matt Rein will play Roy Cohn and David Schine, two notorious Jewish closet case consultants who cravenly capitalized on the McCarthy madness. Though Brown doesn’t go there, some say that Hughes was gay or bisexual.

Raymond shares “overall the universality of the play is to me in the politics of extremes -the need to vilify opposing viewpoints and label them ‘anti-American’ to maintain and build power and control. Then there is race, which is an undercurrent that fuels hate and fear and intensifies the need to keep control. And art which is so much about revealing the multifaceted nature of our existence and interactions and subverting or at least deconstructing widely accepted but narrowly defined version of ‘truth’ – something that can’t be tolerated by people or groups working to maintain and amass power.”

Myron Johnson of Ballet of the Dolls portrays a life-or-death situation in a new piece inspired by a piece from two decades ago. He calls it “a very twisted ballet exploring a man on the brink of a change in his life, a death, a crossroads, a beginning, or all of the above. Seen through my disturbed imagination I perceive my brain to be a combination of John Waters, Federico Fellini, Cecil B. DeMille, Bob Fosse and a bit of Laurie Anderson. It doesn’t matter the story or the subject, it will always have a Dolls esthetic because it comes from my experiences. I see the world every day with Joan Crawford, Bette Davis, Fred Astaire, Liza and Judy and many others like them still walking around with me at my side. My life is full and very kitschy. This piece is very deep at times, very shallow at others, but always real to me.”

The second century collection of magical tales by Apuleius, also titled Metamorphoses (not to be confused with Ovid’s) has been adapted for stage by Liz Neerland who has a strong affinity with classic literature. She’s knows how to theatricalize big, heady ideas. But don’t worry, it won’t be in the original’s language, Latin.

Neerland says she was drawn to the book because “first, the stories themselves seemed so theatrical, and second, that despite its influence on so many things, it is relatively unknown. I love good source material that I can really dig my hands into, and The Golden Ass provided a great opportunity. The book is known for being bawdy, and hilarious, and telling stories about regular people. In our version, eunuchs become drag queens, and the Farmer and His Wife become the Farmer and Her Wife, and the Story of the Two Cooks has moments of Kabuki.”

Two reflections of 19th century scientific imagination’s ‘Steampunk Era’ spark this new stage invention. Steve Schroer, an inspired adaptor and director of literary works for stage, says of Fitz-James O’Brian’s 1858 story, The Diamond Lens: A Microscopic Fantasy of Love & Murder, ‘the fantastic elements arise out of imagining what machines might some day be able to do. A microscope serves as a portal to another world. Reminds me of Arthur C. Clarke’s dictum that any sufficiently advanced technology is indistinguishable from magic.”

Co-creators Adrienne English and Joshua Scrimshaw invent a silent comedy melodrama, To Mars With Tesla; or The Interplanetary Machinations of Evil Thomas Edison. Scrimshaw says “our show starts out with the historically accurate conflict between (Nikolai) Tesla and Edison over alternating and direct current systems. Edison did try alot of desperate and dirty tricks to discredit alternating current, including financially backing the invention of the electric chair to show alternating current’s dangers. The show takes a fantastical turn and the rivalry between Tesla and Edison leads them to encounters with Pierre and Marie Curie, not to mention the King and Queen of Mars!”