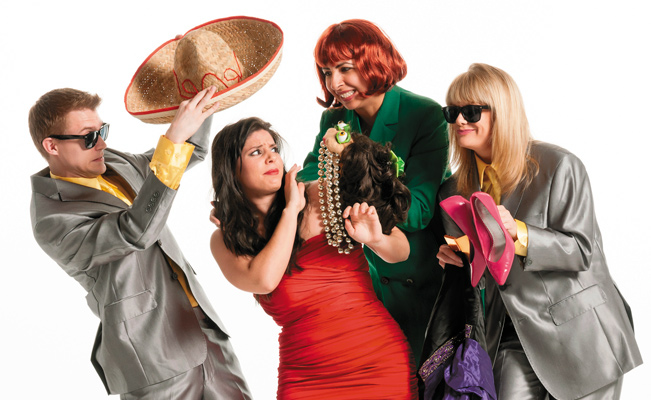 Learn to Be Latina. Photo by Rich Ryan

Categorical ‘one size fits’ all definitions for identity can often be counted as serious flaws not only in general media, but in the various civil rights movements, including GLBT rights, as well. Playwright Enrique Urueta satirizes this in a comedy whose title you may not expect to have prominent lesbian themes. He considers what happens when someone of Middle-Eastern descent feels compelled to pose as Latina -because Latin descent is more acceptable to mainstream America- if she is to pursue a show biz career. Moreover, Urueta then layers in how being a lesbian will further figure into that charade.

Director Mark Valdez says that in “drawing parallels between racial and sexual identity, the story looks at the difficulties of coming out. Enrique’s approach uses humor to reveal ourselves to us – in this case the absurdity and small-mindedness of bigotry.”

Jamie Elvey who plays protagonist Hanan relates that her character “is Lebanese-American and in post-911 US she is dealing with the very real prejudice against Arabs. Hanan’s dream is to be a pop star, but she is told that because of her ethnicity she is ‘not marketable’ to the masses. I think Hanan is so compelling because she really doesn’t fully fit within any world that she’s living in. She’s not ‘Lebanese’ enough in her parents’ minds and she’s certainly not ‘American’ enough for everyone else. Along with the negotiation of her ethnicity comes her sexual awakening which potentially pushes her even further from her pop star dreams. Hanan is the antithesis of what we think a pop star should be. She is expected to reinvent herself, giving up everything in order to pursue her love of music. Perception is everything, and as an Arab lesbian, she is out of America’s comfort zone.”

Hope Cervantes also plays a lesbian character, Blanca, which means ‘white’ in English, but who happens to be Chicana and dark-skinned. Cervantes describes her as “grounded and knows who she is and never apologizes for it. She falls in love with Hanan and knows the music industry is not fair or forgiving of people who are ‘different’. She never waivers in her beliefs and stays by Hanan through Hanan’s self-discovery.”

The protagonist of Shakespeare’s tragedy is actually not the title character, rather, it’s Marcus Brutus. Volumes have been written and spoken about to what extent Brutus’s ego undoes him. But for director Carin Bratlie’s all-female production, actress Noe Tallen who plays that role, doesn’t necessarily see him that way. Thanks to her research, she points out that the play’s real protagonist “wants to preserve the Republic, to keep it for the citizens. Caesar (Kirby Bennett) is trying to change the Republic to a monarchy, to have complete control and change Rome.”

That said, Tallen thinks Brutus’s tragic flaw is “the presumption that others are as loyal to Rome as he is. He trusts too easily. He forgives too easily. He doesn’t see how the world works. And he doesn’t anticipate how the agendas of others will foil his plans. He is not a stupid man, just naive to the potential corruption that often comes with power.”

Regarding the all female casting, dramaturg Christine ‘Kit’ Gordon notes that “the deep friendship between Brutus and Cassius (Katie Willer), the profound loyalty of Mark Antony (Katherine Kupiecki), the dedication of the soldiers under Brutus and Cassius’s command, are not necessarily male traits. Having these roles played by women, however, allows us to see the characters in a somewhat different light. Would Cassius have been considered hysterical as a result of his anger management problems if he were a woman? Occasionally in the script, the characters also use gender-specific language that defines women as less than fully human – or at least as fully human as men: early in Act I, when Cassius speaks with Casca (Anissa Siobhan Brazill), a fellow conspirator, he says:

Let it be who it is: for Romans now
Have thews and limbs like to their ancestors; But woe the while! our fathers’ minds are dead,
And we are govern’d with our mothers’ spirits;
Our yoke and sufferance show us womanish.

Yet the women in the play can be as bold as the men: Brutus’s wife Portia (Rachel Finch) wounds herself to prove to her husband that she can be trusted. Caesar himself initially takes his wife Calpurnia’s (Carin Leonard-Gorrill) fears for his safety seriously, but then is dissuaded when it’s suggested that he’s less than a man for doing so.”

Gordon concludes “so in this very masculine world, what’s defined as womanish is disparaged, and yet many of the virtues and behaviors exhibited by the male characters could, in a different context, be seen as something more broadly human, if not specifically female. Having women play the roles allows us to consider our own assumptions about human behavior.”

For all its good intentions, and stunning evidence, the anti-bullying campaign of the past few years often gets entrenched in a smug style of categorical thinking that conservatives sometimes rightly accuse liberals of. (We’ve also seen similar patterns regarding the Trayvon Martin tragedy.) Perhaps, not since the heyday of controversial conclusions by feminists Andrea Dworkin and Catherine MacKinnon has the Left been in such need of pushing the ‘reset’ button.

Thankfully, director Adam Arnold and his teen actors have gotten beyond the hype with what promises to be yet another intriguing Blank Slate company-created play. Arnold says he has become alarmed at the lack of compassion, nuance, and science, that  media, schools, and certain anti-bullying efforts have put forth. He says the collaboration “shows not only the dangers of bullying behaviors and the impact it can have on its victims, it uniquely shows the perspective of a bully. Not as someone who needs shaming, nor as someone who desires to hurt others because he is evil and loves to do evil for evil’s sake. Persons who bully are human beings, are often in deep pain themselves, and it is this pain that is driving their cruelty toward others. Bullies are not all the same. We are hoping to show that most bullies have been -and some are continuing to be- victims in some area of their life, and that this complex, serious topic deserves more than slogans and stickers and posters.”

International Falls, MN was a union town when playwright Jeannine Coulombe was growing up. Her father, step-father, and uncles worked in a paper mill, as well as her friends’ fathers, uncles, and grandfathers. Moreover, friends she grew up with still work there. In Coulombe’s formative years The Mill’s Friday payday meant an immediate influx of of money for groceries and dry goods. Restaurants actually increased staffing just for payday. A classic example of how when the working class spends money it swiftly and directly impacts the grass roots economy.

Coulombe shares “my father came home with a pink slip several times when I was a child. Layoffs happened. Strikes occurred. But in the end, he did retire after giving most of his life to The Mill. He started working for Boise (the corporate mill owners) when he was 12, delivering the corporate-owned newspaper. But for most of his 40 years at The Mill he was a machinist. He has a pension and has enjoyed a rather comfortable retirement. And I know it was the union that made this possible for him. I can’t say, however, that the generation after him will enjoy what he is able to.”

The decline of a one-industry union town’s economy is The Mill’s social background, as well as the impact of economics on everyday people. Coulombe’s view is not a strict slice of history but a dramatic reflection on it. She explores the idea that “shutting down The Mill is more than the idea of a factory closing and jobs being lost. (It’s about) a town folding, a community being being destroyed, a way of life being  gone forever.”

Dramatic conflict is fueled by a 1989 International Falls union riot and although over two decades have passed since then, director Matt Sciple says this is “the right political moment” for Coulombe’s work to emerge. He muses “in our Occupy Era, her story of the Have Somes pitted against the Have Lesses by the Have Everythings could not be more topical. She makes us let our guard down with charm and gentle humor as discussions of flower-boxes, Minnesota winters, and the Twins, begin to coil and ripple with the unfolding events of history and the choices made in a Minnesota backyard in 1989 that change their world forever, and echo our own.”

The relationship between a caretaker and the mentally disabled man she looks after is poignantly portrayed in Jeffrey Hatcher’s disarming new play. Janet Caleodis (Melissa Hart), in her early 70s, acutely realizes that Hayden Harris (Michael Paul Levin), being a generation younger than she is, may not have the ability to contend with adapting to a new situation should she either pass away or become fully disabled herself.

Hart underplays the anguish to perfection. Levin, known for his bright comedic performances, explores a depth and finds layers I’ve never seen in his previous work. The pair’s wonderful chemistry clearly owes much to the assured, gentle direction of Michael Robins.