When German playwright Frank Wedekind penned his milestone 1891 drama on adolescent sexuality, he never could have imagined that Spring Awakening would also become a groundbreaking Broadway rock musical in 2007. Peter Rothstein now directs that winner of eight Tonys’ first local production presented by Theater Latté Da in partnership with the University of Minnesota Department of Theatre Arts and Dance, renowned and beloved for its more classic approach to musicals.

Music director Denise Prosek says Duncan Sheik’s score, more hardcore than any of her previous Latté Da work, is “driven by the rhythm section, especially the guitar. The songs are contemporary, alt-rock, and they live in a groove intended to create an emotional atmosphere rather than a story-driven exploration. The rhythm, harmony, and melody range from hypnotic to driving rock beats. The band consists of drums, bass, guitar, keyboard, and cello. We rehearsed with a real piano for the first couple of weeks and now we’re using a keyboard. The difference in the tone with the electronic sound made all the difference in the intention of the piece. It has to live in the instruments of the rock world.”

Jack Tillman and Grant Sorenson play gay characters Ernst and Hanschen. (Sorenson actually directed a superb revival of Wedekind’s drama for the 2008 Minnesota Fringe Festival.) The set-up is that Ernst struggles with his schoolwork. As Tillman observes “when Hanschen, one of the most intelligent boys in the class, wants to be his friend and helps him with his schoolwork, he’s extraordinarily surprised, but relieved and pleased. He feels like he’s fitting in, even though most of the other children don’t care for Hanschen much. Ernst doesn’t care because Hanschen makes him feel special. And because of this, he begins to fall for him, which is something completely foreign and unknown to him. He’s never had anyone interested in him before and doesn’t know what these feelings mean, especially towards another male. While the kiss that they share shatters Ernst’s preconceived notions about his future and what he wants, he’s okay with it. He may be scared, but it’s better than anything else he’s had in the past.”

Sorenson points out that “Hanschen uses his intelligence to cover up the insecurity he feels inside. He puts on airs of being above everything—his classmates and teachers—so that he doesn’t ever appear weak or vulnerable. So then, when he finally finds a boy who falls for him, like Ernst does, it’s this mixture of satisfying victory and ‘what do I do now’ nervousness.” 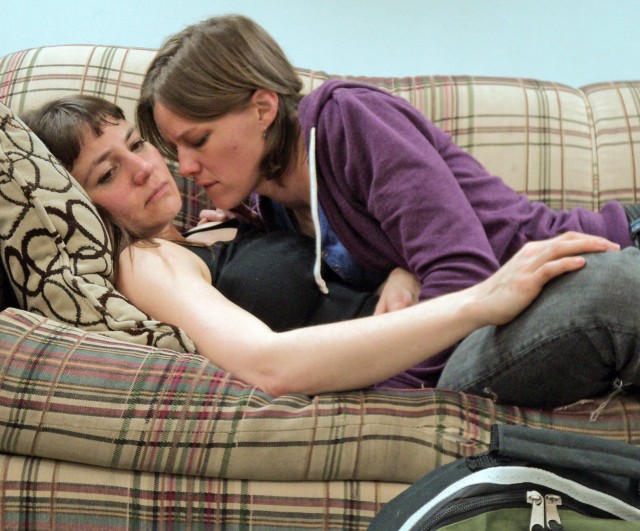 In recent months, director Leah Cooper blew us away with great productions of August: Osage County at Park Square and Independence for Theatre in the Round Players. As one would expect, Cooper’s latest project, which is for 20% Theatre Company Twin Cities, will trigger deep discussion about human interrelatedness. Where We’re Born by Lucy Thurber involves Lilly (Lindsay Marcy), who comes home from her first semester at college to stay with her older cousin, Tony (Anthony Neuman), who raised her. She finds herself attracted to Tony’s live-in girlfriend, Franky (Becka Linder), and they begin to have a secret affair. Later we find out that Lilly’s first sexual experimentation was with Tony.

One can interpret this as a look inside bisexuality, which is certainly underserved in theater and film. But Cooper, who thinks that in some cases sexual orientation is fairly fixed, also says that in theater and in life “I find it more useful to think of sexuality on a spectrum over time and through circumstance. This play has its characters moving along that spectrum in response to need, fear, hope, and desire.”

Cooper says it’s about “love, loyalty, and sexuality. The fact that both Lilly’s and Franky’s love crosses gender is not really treated like bisexuality in the play, nor is it resolved really. The deeper theme of the play is about how someone like Lilly, who comes from a small, working-class town and is destined to go somewhere with wider possibilities, can push through the boundaries both around her and inside of her to get there. In the play, that push plays out in sexual ways. It’s up to the audience to decide what Lilly’s and Franky’s true sexuality is, and whether their actions are destructive or transformative or both.”

Asserting that meeting in a basement dungeon can spark true love, director Marie Losier’s documentary relates the fast lane lives of industrial rocker, Genesis P-Orridge, and dominatrix, Lady Jaye. Genesis lets us know early on how gratifying housework is when done in bondage mode. There’s no outright discussion of his transgender status, though we see he has a penis and has had breast implants. Losier’s work exemplifies the weighted notion that gender doesn’t really matter, implicitly beating the drum of transgender activism about the wrongness of gender binaries. But what’s revealed here will be seen as so extreme to many (including liberals) that some may actually decide to stop heeding that drumbeat. Ironically, this film that implicitly celebrates the melting of gender binaries may actually have the opposite effect its creators envisioned.

The film’s most controversial point is where the two had cosmetic surgeries to become more like the other—’to consume each other—you and me just be one—and not be individuals anymore.’ One must ask: is this immortal love or codependency gone berserk? At what point does medically transforming one’s biological body cross the line into recklessness?

The richest segments relate to P-Orridge’s connections with surrealist queer writer William Burroughs and Brion Gysin’s ‘cut up’ techniques in service of ‘pandrogyny’ (e.g. the breast implants and the surgeries can be considered ‘cut-ups’). Also worth noting, Losier isn’t interested at all in examining the drug-infested sphere of her subjects. Hence, she exemplifies a Dionysian polarity in queer-oriented artistry whose opposite pole may be said to be exhibited by composer Michael Shaieb and playwright Matthew Lombardo who conscientiously give evidence and warning to the queer community about addiction’s destructive essence. 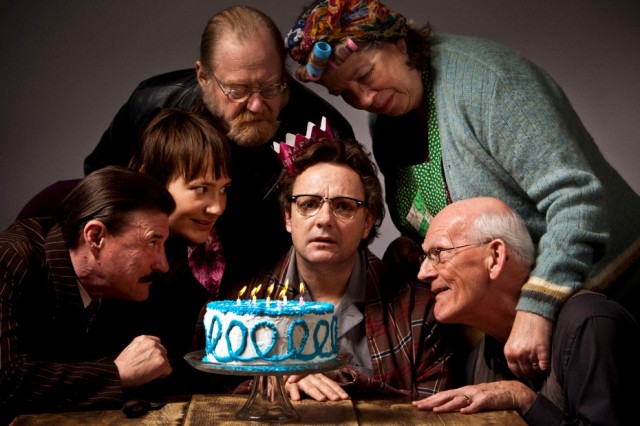 Playwright Harold Pinter’s 1958 play was dubbed a ‘comedy of menace’ and was largely panned by British critics. Soon after its first London production closed, it was praised belatedly by Harold Hobson of the very consequential Sunday Times. That put it en route to classic status.

The Jungle, which has revived dark plays by Joe Orton and John Guare, steps back into the shadows with The Birthday Party which director Joel Sass calls a “pitch-black comedy in which a couple of peculiar gangsters, Goldberg and McCann (Marty Reuben and Tony Pappenfuss) track down Stanley (Stephen Cartmell), who is hiding out in a rooming house straight out of an episode of Hoarders, run by Meg and Petey (real-life acting couple, Claudia Wilkens and Richard Ooms). An attractive next-door neighbor drops by, and they all throw Stanley a birthday party – except it isn’t his birthday.”

Anton Chekhov is generally considered to not be a politically-driven playwright, but in retrospect, his major plays, penned in the late 1890s and the first decade of the 20th century, do indeed show us a society ripping apart at the seams. The Russian Revolution didn’t occur till the second decade, but (as we know) social upheavals like wars, are always prefigured by events.

Nightpath Theatre director Maggie Scanlan approaches The Three Sisters with that prefiguring sense. She asserts “the Russian Revolution was originally viewed as the ultimate victory of the ‘people’—the 90% as it were. The ensuing results: the power being grabbed by the most aggressive and organized segment—the Communists–was the beginning of the end of Russia, culturally and socially. The stranglehold these leaders exercised over the country in the name of equality snuffed out the Russian culture and people. The Russian Revolution is one of the most blatant mistakes of the 20th century. In hindsight, it appears as a collage of atrocities beginning with the Czar’s attempt to control strikes and protests through street massacres to the brutal execution of the Czar and his family, the purges of Lenin, the assassination of Trotsky, and the ‘Terror’ wrought by Stalin.”