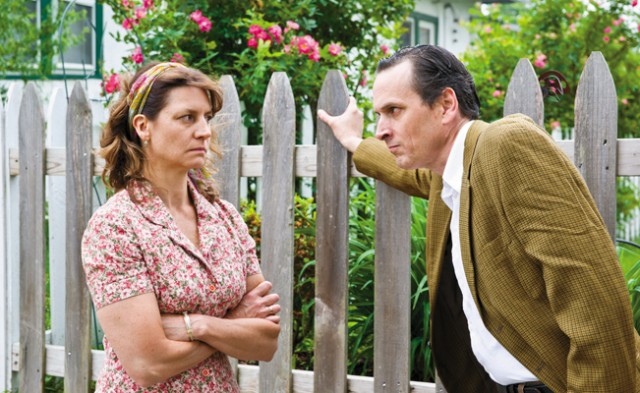 Carlyle Brown, one of the juiciest socio-political minds writing plays today, once again taps into past historical currents in a way that speaks to the present day. He describes his latest: “In American Family, a white pre-teen girl, Mary Ellen (Megan Fischer), is taken away from her trans-racial family by her biological father (John Middleton) because in Alabama in 1964 inter-racial marriage is illegal. As a grown young woman, Mary Ellen (Tracey Maloney) is haunted by her past and the life she has lost and the consequences that the bigotry of her father has set upon her. Now she returns to the life she left behind to meet her mixed-race half brother (Michael Terrell Brown) who she has never met, to heal the confusion and horrors of those lost years and to finally return to her real home and family. It is a story that explores how the past is always present.”

Imagine three youths living in an isolated area with virtually no adult supervision. Director Randy Reyes says that A. Rey Pamatmat’s play involves “a Filipino and a white teen discovering their gay identity together. This brings up the cultural factors of coming out. How is it different for a white teen to come out than a Filipino teen? There are also economic factors that further complicate the situation.”

Alex Galick plays Kenny, a 16-year old Filipino American in the early 1990s, who shares a remote farmhouse with his 12-year old sister, Edith (Isabella Dawis). Galick relates “because their mother is dead and their father absent, he’s been forced to become both parent and sibling to his little sister. He takes care of the house, feeds them both, and budgets on a meager weekly allowance that their father may or may not remember to send. This house has become an isolated prison filled with the pain of abandonment and loneliness. To deal with that pain, Kenny has chosen to hide from the outside world and give in to his father’s neglect. Then he falls in love for the first time with a friend from school, Benji (Matthew Cerar). Together they discuss and explore their sexuality, and search for vindication of who they are despite an environment that tells them they’re freaks.”

Galick continues, “they build a relationship and support one another. It’s not easy for Kenny to open up in this relationship. His fear of abandonment and injury is something he has to deal with. When the outside world comes crashing in, he can no longer hide, and it threatens to destroy the family he’s built with Edith and Benji. Kenny must confront his fears and also his father.”

Cerar says that Benji “must come to terms with the strong feelings he is having for Kenny. As he yearns to form his idea of a traditional young relationship, he faces resistance from Kenny, who is less comfortable with this idea. Just like many other teenagers, all Benji strives to do is openly express his eagerness and passion for a world that doesn’t accept it.”

Their bond is further strengthened by 12-year old Edith. Dawis sees her “as stubbornly self-sufficient. In her eyes she’s a heroine, fighting to keep her brother and herself safe. She’s fiercely independent and uncannily sharp. But she also has a very big heart, and a kind of maternal instinct to protect those around her. The moment their thin sense of security is threatened, Edith springs into action.”

Dora Arreola has been directing Outside the Circle as the writer/actors develop it. She observes that the characters “push each other to confront their phobias and begin to accept each other when it becomes clear that both are outcasts of society. Rafa confronts that he has internalized homophobia because of family taboos around homosexuality and taboos about disability. At first, he denies that he is feminized because his body is not ‘normal’, because the social concept of women is ‘weak’ or ‘not masculine’ – he has internalized homophobia because of his condition. On the other hand Andy is struggling with her impatience and disgust with spending time in a dangerous homphobic environment–a heterosexual men’s bar with Rafa–who wants to show off his machismo and power as a heterosexual man.”

Assaf says that arguments she and Valdez have had in the process of shaping the play have actually been incorporated into some scenes. She points out that “nearly everyone can relate to unrequited love, even if their identities and politics are very different. That’s why we chose this subject as the starting point. As we went deeper in our explorations we understood that beneath the experience of rejection is a whole set of questions and issues: what is ‘normal’ and who decides what is ‘abnormal?’ How can society accept some things as ‘normal’ that are so dehumanizing, and on the other hand, see some forms of love as ‘abnormal?’ What is this desire that we all have to be ‘normal’ or to be on the ‘inside’ of certain social circles? Even though being ‘outside’ is sometimes painful, how is it also liberating?”

Valdez says that his longtime association with Assaf and Arreola has made him, as he puts it, “open my mind more in accepting individuals for who they are and not on physical limitations and sexual preferences they might have. By seeing and understanding the struggles that a lesbian goes through, I was forced to confront my own prejudices and phobias about being disabled.”

This, of course, is in the full Pangea-Pueblo spirit. As Teatro del Pueblo Artistic Director Al Justiniano asserts, “Pangea and Teatro are are committed to bringing to the stage voices that reflect the diversity and the complexities of our society.”

Attention Secret Society Buffs! Playwright-director Josh Cragun who dwells in the theater of ideas will take you to an endless library, as he puts it, “born from the fall of an ancient civilization. Babel is fundamentally about the tension between hubris and  humans’ need to discover and make their world better. When do we start to know so much that we begin to think of ourselves as gods, and when do we amass so much knowledge that it becomes meaningless?”

Playwright Frederick Knott’s 1952 hit brings to mind great brooding films of that time like The Asphalt Jungle and Executive Suite–gripping depictions of the male identity crisis specific to the post World War II era. Many young and middle aged men could not fit back into traditional marriage and/or gain steady financial footing. To compensate, as these works reveal, they desperately turn to ruthlessness and target others. Knott’s thriller hinges on gullible wifely obedience that unwittingly enables grisly treachery. That post-war male identity crisis and the misogyny it fostered comes through director Bain Boehlke’s handsome edge-of-your-seat revival.

Six years ago, Steven Meerdink and Kevin Hansen shared Lavender‘s top spot for Best Actors in a Musical for Minneapolis Musical Theatre’s La Cage Aux Folles. Now MMT’s two Co-Founders have teamed up again for the first time since then in a touching musical about two men who have been friends since childhood, written by Brian Hill with music and lyrics by Neil Bartram.

Hansen, who will retire from MMT after this season, plays Alvin and says his character “comes at friendship from a pretty clear perspective: ‘If you commit, you see it through.’ There aren’t many gray areas for him. If there is one, it is in his feelings for Thomas. It is his struggle with those feelings that leaves questions for all involved as to whether those feelings ultimately lead to Alvin’s fate.”

Meerdink notes that Thomas is driven by societal expectations: “He approaches his life as he feels he is supposed to. He also pushes himself to do everything right, putting a great deal of pressure on himself. This is why be becomes so fascinated with the individuality that Alvin displays. It also becomes his downfall in trying to develop relationships. He has trouble committing to a connection with someone who is not perfect.”