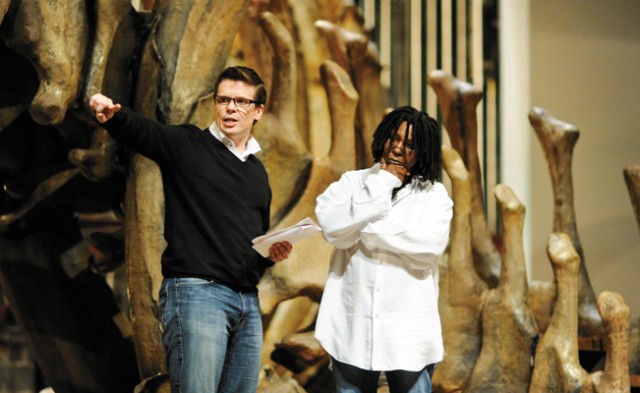 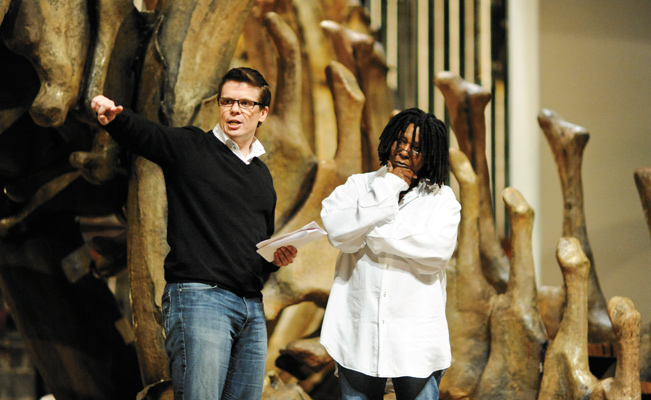 Julie Taymor’s direction of The Lion King (which actually started at the Orpheum) is rightly considered to be singular and legendary. But she is also called on to direct other plays and marvelous films like Across the Universe and The Tempest. So that’s why Associate Director, John Stefaniuk, is so important to Taymor’s vision. He shares, “I want to maintain Julie’s vision created 15 years ago in Minneapolis. The challenge remains to keep that same energy, that same story, that same passion intact, while still remaining fresh and still allowing the show to breathe and grow with the company you have at any given time. In essence it’s the simplicity of the story and the way Julie has gone about telling it with the puppetry and the use of the African music. I think she does it with great honesty, heart, passion and originality. And what my job has been over the years is to maintain that while still allowing the voice of any given actor to be heard and to allow the energy of any given company to be expressed.”

20% Theatre Company Twin Cities has found their niche as a voice for transgender-oriented plays. Not since Actors for Change in the early 1990s has a local theater devoted so much creative energy toward trans themes. In 2009 their festival of mini-plays, The Naked I: Monologues From Beyond the Binary illuminated issues of transgender identity. Three years later the new The Naked I: Wide Open delves deeper and wider with contributions by various trans. gender nonconforming, and allied performance-based artists.

Erica Fields is directing Evolution by Jessica Englund. She says,”It is a piece that explores the emotional pain and searching of the partner of a transgender person. It is this character’s monologue that touches on the difficulty in understanding who her partner really is, the sadness of watching her struggle with her identity, and the inevitable question of what should she do? It is written about a lesbian couple but it could be the story of any partnership and any gender. In my own transition I had to witness the struggle that my then wife had to got through to deal with the idea of her husband becoming a woman. It was very painful and there was no one for her to turn to. I was glad to get a chance to use the experience of witnessing her struggle in directing this piece. We sometimes refer to transition as a journey. This is a hidden journey that is rarely seen. This journey of the partner of a transgender person in the beginning stages of her own journey is not explored enough and this piece does an excellent job of showing that side of transition.”

Fields is also acting in Pink and Blue: A (short) Love Story by Andrea Jenkins directed by Katie Starks. In this play a transgender woman is in love with a cis-gender woman. The play explores the difficulty of feeling and expressing that love in society. Fields says, “It is about her struggle to accept her lover and to express her love to her. It deals with the duality in life, the back and forth of feelings and expression of those feelings.” There are two characters. I play a character who is trying to figure out her feelings for her girlfriend.” Zealot Hamm is Fields’s co-actor in a play where both characters are unnamed. (Cis-gender refers to someone who is born into the same body as their inherent gender identity.)

Fields’s own play, Congruity, will also be staged. She says “I wrote it after a night out with a girlfriend of mine, who also writes a column for Lavender – Ellen Krug. We had dinner one night a few months after my gender reassignment surgery. We were enjoying dinner at the Loring Pasta bar. It was crowded. As I walked to the ladies room, it struck me, I was not nervous about bumping into tables. This was odd. I had always been a bit clumsy. As I thought about it I realized that it was more than the wine or the fun of the night. It was actually something deeper. I began to realize that becoming my true self and gender, was more than just physically becoming a woman. It was like I had just synched my whole being through this procedure and the process of transitioning genders. In fact it was beyond gender. I was now able to walk through life in balance. In synch. In congruity.”

Ariel Leaf directs Queer Confessions performed by Jenn Western. Leaf calls it, “a sexy, self-affirming monologue about a person that, the more she allows herself to dress and conduct herself as a man, the more she welcomes and accepts her given gender as a woman. It’s about discovering a freedom in walking the gender line, in flirting with perceived identity and the acceptance of herself as not one label -butch, femme, etc.- but as coming down to, and loving herself with the simple term ‘queer’. ”

And as The Naked I: Wide Open contributor Anthony Neuman points out, “being a little bit vulnerable, a little bit naked, if you will, is what this project is about.”

The Acting Company and the Guthrie combine energies once again to produce a Shakespeare classic. Sometimes productions tend to impose a political agenda given this tragedy’s inquiry into political intrigue, assassination, and the conflict between Republicanism and ancient monarchy. Director Rob Melrose says, “Obviously this won’t be the first modern dress production of Julius Caesar. In fact, the play has been notoriously used in the past to make one-sided political points about current events. I felt that using the play this way goes against the spirit of the Shakespeare play. Shakespeare goes to great pains to give each side its say. Even Brutus is given a chance to explain his reasons for considering his actions. No one is demonized. My interest in using modern dress is for us to be more engaged with Shakespeare’s story, not to create a new story of my own. To be immediate, not clever.” 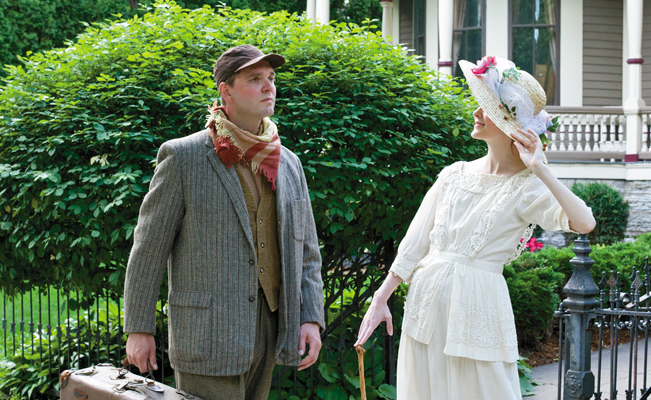 Terrence McNally is known for his edgy gay-themed plays Love! Valor! Compassion! and Corpus Christi. But he also steps beyond that at times such as with this musical. Director Gary Gisselman calls McNally’s stage adaptation of a novel that he loves “Very skillful. The historic and cultural sweep of E. L. Doctorow’s novel is difficult to capture on stage and was equally difficult in a rather mediocre film, but McNally has done it well. What is also difficult to capture is Doctorow’s ironic viewpoint, which I find in some degree in the adaptation and we will try to find in the production as well. Lavender readers may be interested in Emma Goldman’s presence in the piece. Her advocacy for open love, birth control and bisexuality was certainly revolutionary for the mainstream in 1906 and if the Iowa Caucus is any true indicator, still is.” Kersten Rodau plays Goldman. Music by Stephen Flaherty. Lyrics by Lynn Ahrens.

In this opera, first staged in 1892, Mary Dibbern, Minnesota Opera’s Head of Music, says that composer Jules Massenet (1842-1912) “expresses a mixture of dream and reality that mirrors the passion and confusion of both central characters. Werther (James Valenti) is longing for the ‘perfect love’. His opening music uses a harp and woodwinds, especially haunting clarinet melodies. The clarinet is often used in an orchestra as a substitute for a voice, and here the clarinet is expressing what Werther cannot. The harp chords remind us that Werther is looking for this heaven on earth. And when he first declares his love to Charlotte, he says that she has a ‘celestial’ smile. For Charlotte (Roxana Constantinescu), the key instrument is the saxophone! Adolph Sax invented a whole family of different sized saxophones in the 1840s. Massenet uses its rich, and somewhat nostalgic and mournful timbre, mingled with standard orchestral instruments, to create a unique sound which is often heard when Charlotte is experiencing the intense emotion brought into her life by the romanticism of Werther.”