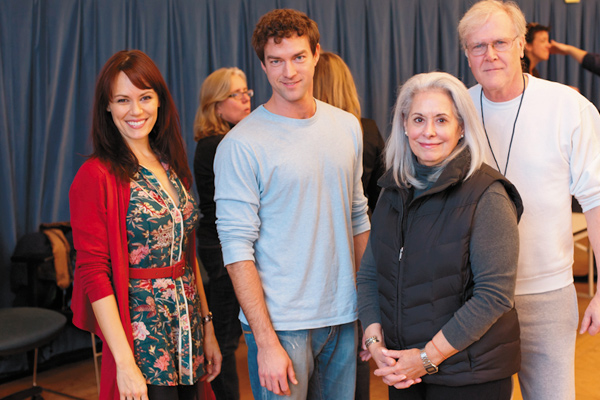 The 1955 Pulitzer Prize-winner is as forthright in its gay themes as just about anything Tennessee Williams ever wrote. In Cat on a Hot Tin Roof, those themes center around Skipper, who is actually not a character in the play itself but rather, the dead football buddy of Brick Pollitt, the main character. Brick is drinking himself into oblivion because he cannot come to terms with Skipper’s death. This, in turn, creates misery for Brick’s wife Maggie, nicknamed Maggie the Cat.

Carla Steen, the dramaturg for the Guthrie revival, says, “One of the ways I keep hearing Brick (Peter Christian Hansen) described, is that he’s an idealist. He idealized his relationship with Skipper and is now dealing -or rather, actively not dealing- with the reality of the relationship. Brick’s sexual orientation may add layers of understanding to whatever that relationship was, but the play doesn’t clearly tell us what Brick’s orientation is. He may be gay, he may be straight. He does appear to be deeply homophobic either way. Maggie (Emily Swallow) appears certain that Skipper was gay -as does Williams in some of his commentary- and had fallen in love with Brick. Brick seems more reluctant to acknowledge that clearly. At one point he tells his father, Big Daddy (David Anthony Brinkley) that ‘poor dumb Skipper’ just believed that what Maggie said about his feelings for Brick were true – and that it broke him. But at that point, Brick may also still be hiding his own deeper self-loathing for having turned his back on Skipper, so it may be said out of denial and guilt. But given how quickly Skipper falls apart through drink, it’s hard to argue that Skipper wasn’t tormented by his love for Brick.”

Hansen shares, “Brick has never really come to grips with how Skipper felt about him or what their closeness meant. He is forced to re-examine what their whole relationship may have been about and he violently doesn’t want to do that. He instead shifts the blame to Maggie for her part in the whole thing and takes refuge behind his liquor. And well, the rest, is the play.”

Swallow relates, “Maggie noticed, even back in college, a special bond between Brick and Skipper. But college is a place for boys to be boys, and for boys to spend most of their time with other rowdy boys.  It seemed natural- they were teammates, after all- and let’s not forget that Maggie herself was included in that exuberant camaraderie. She was the team’s biggest cheerleader. And I think the three of them functioned as a unit in many ways. But college ends, and when it does, it presents a reality that suddenly seems a lot more harsh and has less room for dreaming.”

Swallow adds, “Outside the safe confines of the university walls, Skipper and Brick’s bond became threatening to Maggie; someone in a trio usually winds up feeling like a third wheel, and she was determined that it not be her. Skipper’s devotion to her husband was a threat to her own intimacy with Brick and she refused to ignore it. Since they met, there has been no room in her thinking to imagine a future without Brick. So she went to Skipper to confront it.”

Swallow says that after Skipper’s death, Maggie refuses to let her life with Brick “be haunted by a ghost. As she says  herself “Life has got to be allowed to continue even after the dream of life is all over.” She is Brick’s reality and is determined to make him see that her love can be strong enough for both of them.”

Another extraordinary layer in this Williams masterwork, is that the family estate, run by Big Daddy, had belonged to a gay couple, Jack Straw and Peter Ochello. Brinkley observes that “At one point in the play, Big Daddy confesses to his son, Brick, that he had ‘knocked around’ in his time. Before the tender age of ten, Big Daddy Pollitt had bummed the country, sleeping in hobo jungles, railroad YMCA’s, and flop houses in many cities. He ended up falling asleep in a wagon load of cotton, half a mile down the road from the plantation of Jack Straw and Peter Ochello. They found him, took him in and gave him a job – essentially saving him. They gave him his purpose in life and his gratitude for their care was immeasurable. He taught them that “one thing you can grow on a big place more important than cotton – is tolerance.” He never forgot that. Or them.”

What if it were “unnatural” to be heterosexual instead of homosexual? Director Ben Layne says that playwright Greg Abbott “takes that idea and fully fleshes it out, while kind of turning it on its head, while mothers latch onto Bible passages, cite stereotypes that all heterosexual men are promiscuous cowboys, and even question their ability to keep a steady job and a home. A frank conversation flows around prejudice, love, and understanding.”

Kess, a lesbian literature professor who returns to her hometown of Independence, Iowa from Minneapolis, is a major character in Lee Blessing’s play. Actress Rachel Flynn relates, “The last time Kess was at home, four years ago, she had to do the dirty work of committing her mother to the Mental Health Institute for three months, and dealing with her youngest daughter’s teen pregnancy. She hasn’t called or written much since and there is a lot of anger and hurt from all sides needing to be healed. Independence offered little or no opportunity for Kess to be open about her sexuality when she was growing up but her mom isn’t ready, willing, or able to hear it. Most of Kess’s focus in the play involves being the eldest child, resuming her role as the one her mother relied on -because her father wasn’t in the picture very consistently- reconnecting with her younger sisters, and trying to find the balance of meeting family obligations without losing all of what she’s worked so hard to establish during her time spent outside Independence: a career, a healthy relationship, a home, an identity, a life.”

The new Brave New Workshop is in the space that was once called Hey City Stage and after that, Hennepin Stages. Vibrant blues and reds enhance the walls – a perfect choice for a comedy theater. And two bars, one upstairs and one down, will keep you well oiled.

The BNW actor regulars are clearly having fun with this holiday show, which despite its Christmas title, will run till late January. Katy McEwen’s vocals demonstrate stylistic range with a nod to what sounds like Stephen Sondheim and a fun rip-off of the Russian folk ’60s hit, Those Were The Days that was popularized, if not immortalized, by Mary Hopkin. The show’s funniest bit is when Josh Eakright cuddles up into a ‘Crap Sack’, a body suit where you can sleep, defecate, and even be conveniently bundled up for your coffin when you pass away.

When Walker’s Out There series for edgy performance art was on a roll in the 1990s, the focus was on gender, racial, and sexual identity. However, at the same time, in Washington, President Clinton and House Speaker Gingrich were ushering in controversial foreign trade agreements in the name of ‘The Global Economy’, which have consequently, if not cryptically, laid the groundwork for today’s Out There focus. This year’s series, titled Global Visionaries, examines the consequences of what Clinton and Gingrich birthed a generation ago. Job displacement, economic collapse, and stress of daily life take center stage as they comment on a planet whose cultures of fear and widening economic divisions have reshaped how we see ourselves.

Beirut’s Rabih Mroue has been hailed for his skeptical take on current day issues with Looking For A Missing Employee (through Jan. 14). From Japan, Hot Pepper, Air Conditioner, and the Farewell Speech (Jan. 19-21), examines the global economy’s use of language and how stress affects contemporary men and women. Argentina’s economic collapse is the subject of showman Mariano Pensotti’s El Pasado es un Animal Grotesco (The Past is a Grotesque Animal) (Jan.26-28).

Filmmaker Dee Rees has created a landmark work that reveals the anguish of a black teenaged lesbian. And this is Rees’ debut feature! In a soul-baring lead performance, Adepero Oduye plays Alike, a high school student who is already demonstrating the discipline necessary to become a serious writer and who is also struggling with how she might explore her butch lesbian identity.

Though Alike’s home life is in emotional turmoil, it is still economically sound, unlike her best friend, Laura (the splendidly tough Pernell Walker), whose living situation is in dreadful disarray. Alike’s controlling mother (an astonishing Kim Wayans) projects her rage toward her husband’s infidelity onto Alike, whose butch ‘unladylike’ ways bring out Audrey’s worst. Wayans’s supporting turn is Oscar caliber.

One scene that simply unnerves is when a ‘friend’ of Alike’s policeman father, Arthur (a charismatic Charles Parnell), expresses disgustingly brazen lesbophobia toward her. It’s tectonically steeped in the sexist notion that women should fit specific gender roles. (Yes, the film is set in current day. And yes, sexism and homophobia are issues that black communities actively grapple with, though neocon media gives the false impression that there’s total alliance between racial and sexual minorities simply because they may tend to vote for the same political candidates.)

In contrast, a seeming friend, a female, Bina (Aasha Davis), delivers Alike a wicked emotional blow that is actually more damaging than what the sexist delivers. Bradford Young’s bravely intimate cinematography takes us into the psyches of the characters and is light years superior to the garishly adolescent cinematography any number of Hollywood action flicks, whose intention, or design, if you will, is, of course, to make us fear intimacy and dialogue. Way to go Bradford Young!