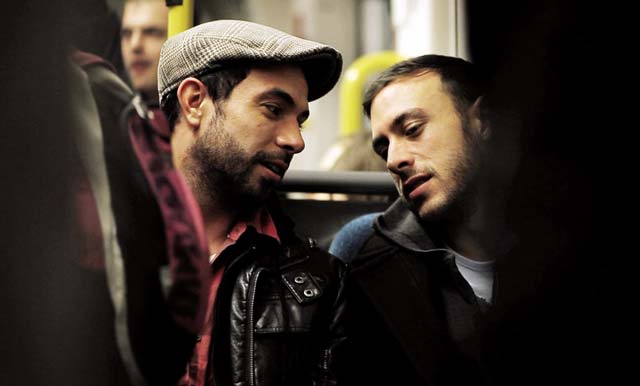 Weekend. Not Jean-Luc Godard’s 1967 classic, but a new English gay film that itself should ultimately merit classic status. Filmmaker Andrew Haigh doesn’t pander to gaydom’s appetite for upper middle class buff bodies. Rather, he probes the hearts of working class gay men, ways in which both gay and straight attitudes work against us, and that true love between men in Nottingham can emerge from ‘lurid’ circumstances, much to the chagrin of the GLBT community’s politically-correct contingent.

Though Weekend is not politically correct, it’s boldy illuminating. I spoke with Haigh recently about his wisely perceptive love story.

JT: Glen (Chris New) is so radicalized by gay politics that he can’t be fully present to Russell (Tom Cullen). I agree with much of Glen’s take on heterosexist privilege, but it sabotages relating to Russell. And therefore, ironically, it thwarts the potential for bonded gay love.

AH: Glen does believe what he says but it’s almost locked him out of allowing himself to be happy. He’s become so obsessed with trying to be a certain kind of angry, radical person. In spending time with Russell he realizes that he doesn’t need to be so angry with the world. That he can let his guard down a little bit.

AH: Even though Glen may be around people who are fine with his sexuality, he still doesn’t really feels like he fits in with them. And I think Russ is the same. They’re both isolated in their environments and they both want to change.

JT: You poignantly capture Russell’s sense of exclusion from his hetero peers and their family life.

AH: And it’s not always their fault either. Russell needs to find the courage to be more open. He loves them and they love him. It’s not just the straight person’s fault.

JT: The actors are more average looking, and poorer, than what we see in many recent gay films. However, as we see the chemistry of these two falling in love and breaking their barriers, it makes them more soulfully, hence, physically beautiful. You want to snuggle up right next to them. It’s a magical revealing of the truth the beauty comes from within.

AH: Once you get to know someone you see different things about them. It was important to me that you fell in love with them as people, emotionally, sexually, whatever. That was a gradual process. I just was not that interested in super hot guys. I wanted to start from a different place.