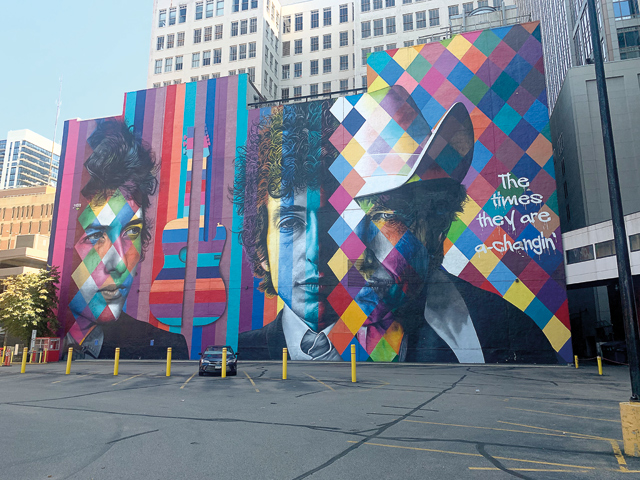 Eduardo Kobra’s The Times They Are A-Changin’. Photo by Ryan Patchin

Walking, driving, biking, riding the train or bus—however you travel around Minneapolis, one thing is for sure: Wherever you go, you’ll spot a beautiful mural.

With so many lively music venues, one of the best theater scenes in the country, and a seemingly endless list of museums and galleries, it’s certainly no secret that Minneapolis is an artsy city.

I’ve spent hours wandering the booths at the Uptown Art Fair. I’ve had a complete stranger type up a poem on his typewriter for me on the Stone Arch Bridge. I’ve swayed back and forth with a summery cocktail in hand, as bands performed at Walker Art Center’s Rock the Garden. I’ve spent more than I’d like to admit on tickets to the latest Broadway tours at the Orpheum Theatre, or my favorite plays at the Guthrie. I’ve enjoyed all of the extravagant forms of art that Minneapolis has to offer. But one way to enjoy art in our beautiful city is often overlooked, seldom talked about, and always free: taking in the stories-high murals.

So here’s a shortlist of murals around Minneapolis that, the next time you’re walking, driving, biking, or riding past, I hope you’ll stop for a moment and truly take them in. 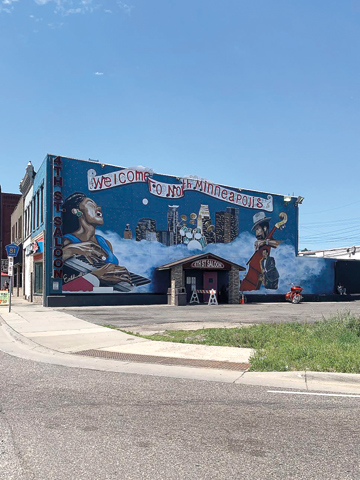 As a dedication to North Minneapolis community members who were impacted by the May 22, 2011 tornado that killed one person and injured thirty people, artist Charles Caldwell painted the “Welcome to North Minneapolis” mural on the side of the 4th Street Saloon. The mural features singer Billie Holiday, jazz musicians, and a breathtaking skyline of Minneapolis.

North Minneapolis, a predominantly Black community, is known for its lack of resources and funding, over-policing, and gun violence. But the community is so much more than that, and that’s what Caldwell’s mural represents. Though the location of the mural is historically a site of many shootings, it stands to represent a community of people who love and protect each other.

The mural, which was funded by the Northside Arts Collective, serves as a “front gate” to North Minneapolis—truly welcoming people to a community rich with art, music, culture, and love. 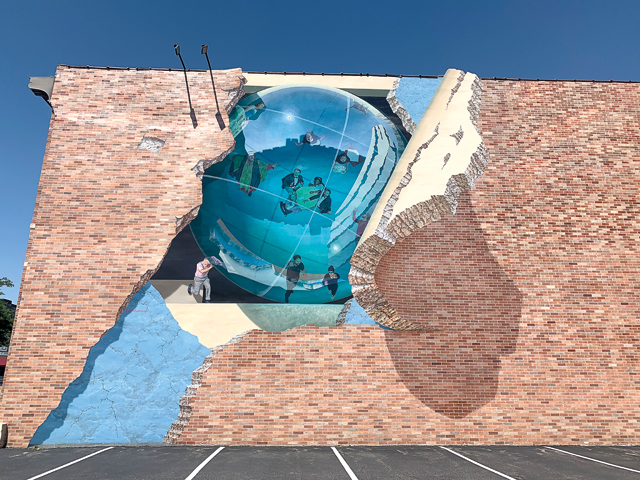 Painted on the side of Theatre in the Round, this mural is just as dramatic as the plays you’ll see inside. Painted by famous 3-D muralist John Pugh, “Tromp-L’oeil” is the first of its kind in Minneapolis, though Pugh has work in New York, San Francisco, Miami, Taiwan, New Zealand, Mexico, and beyond.

The mural, which is made to look like the brick wall is peeling to reveal a reflective sphere inside, features various people in the sphere, with one person holding it up for the world to see—representing sharing what the Theatre in the Round has to offer the city.

“Tromp-L’oeil,” which means “trick of the eye,” captures the attention of all passersby—from residents of West Bank, to students biking to class, to folks heading to work aboard the light rail. 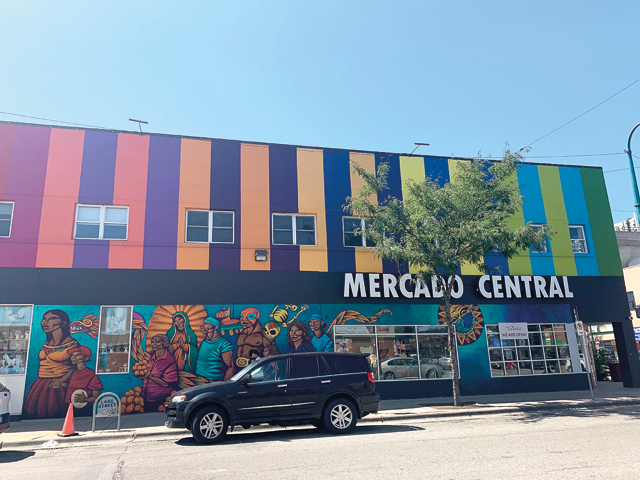 “The Times They Are A-Changin'” – 5th Street and Hennepin Avenue

I bet if you Googled “Minneapolis,” one of the first images that would come up would be this Bob Dylan mural, located in the heart of the Warehouse District. Aside from its funky colors and punchy lyrics to Dylan’s hit song “The Times They Are A-Changin,'” this mural stands out for its rawness and honesty, seen in the multiple faces of Dylan himself.

To the left of the mural is a young Bob Dylan, probably not too long after he briefly attended the University of Minnesota. And as your eye moves to the right, you see Dylan age.

As he gets older, he looks more tired, but I also think he looks more content. Also, something that has always stuck out to me is the pattern used—the same shapes and colors seen on the face of young Bob Dylan are replicated both on the face and the entire background behind older Bob Dylan. I’ve always thought of this as a representation of Dylan leaving his imprint on the world—what he felt, knew, loved, and believed when he was young has become part of the city of Minneapolis as a whole.

The mural, both in lyrical choice and use of patterns, is the perfect representation that the times are certainly a-changin’, and so is our magnificent city.

When I think of Lake Street, I almost always think of art. Whether in the form of street paintings, chalk drawings, murals, food, or dance, it seems that whenever I’m on Lake Street, I’m enjoying some form of art. Which is why the Mercado Central Mural is one of my absolute favorites of Minneapolis.

I love everything about Mercado Central. From delicious tacos to indulgent Mexican desserts to one of the best mango smoothies I’ve ever had (and trust me, I’ve had many mango smoothies), Mercado Central is a foodie’s paradise. But you don’t even need to go inside to enjoy Mercado Central. Painted on the exterior of the building is a beautiful, colorful mural, featuring various faces of Latinx people: young, old, and everywhere in between.

The Mercado Central Mural represents what I believe to be at the heart of Lake Street: food, family, love, community, and pure happiness.