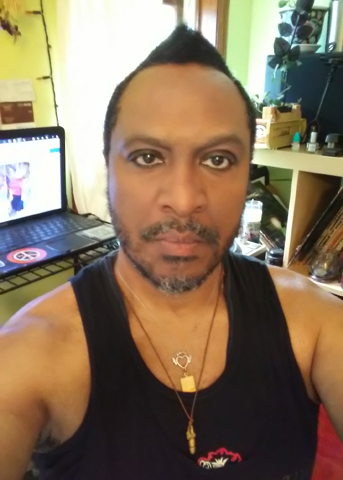 Lavender is excited to introduce a new recurring column of poetry written by Jamez L. Smith that he calls “Jamez Sitings.” A Minneapolis-based DJ, host of “Same As It Ever Was” on KRSM 98.9 FM, and poet, Jamez said that he started writing poetry when he was 12 years old.

“I didn’t have anyone to talk to, so I kept a notebook in which I would write letters to God,” said Jamez. “I would actually start each entry with “Dear God”. Eventually, I grew out of that and learned about journaling. I also attempted to write songs (with no understanding of how to write music). In my twenties, a friend asked if she could look through one of my song books. She commented that, while she could see how they would make good songs, the words stood on their own as poetry. In 1991, I attended the Out/Write Conference in San Francisco. There, I met Assotto Saint, who signed me on with Galiens Press. My first poem was published in The Road Before Us: 100 Gay Black Poets.”

Smith describes his artistic process for poetry as such: “It’s freeform. It’s random. It’s spontaneous. I write in response to my life experiences, my feelings, my hopes, my literal dreams. Sometimes there’s structure. Usually, there isn’t.”

“I am because we are,”
“humanity towards others,”
“the belief in a universal bond of sharing that connects all humanity.”
and yet,
not connected
separate
outside

hurt without caring
hurt easily
effortlessly
hurt without thought
so tired
nothing new
old
like sin and innocence
Always and ever
never accepted
Often excluded
an after-thought at best
lifetimes putting others first
exhausted
ever tired
ever such
lot
known this
long known this
known there truly is no other
freak
unlike the rest
alone
It hasn’t hurt like this in a while, though