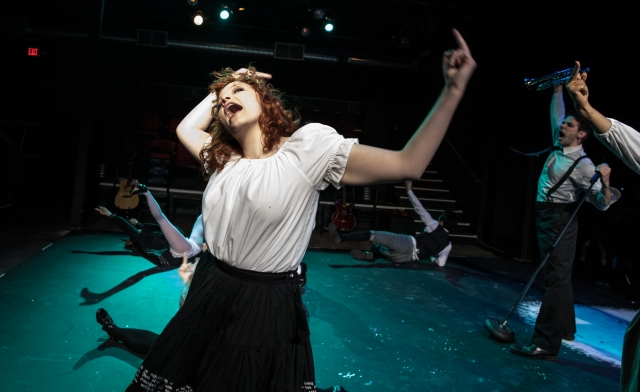 Sex is a mighty power. It can trigger destructive ramifications or serve as a divine entryway to intimacy and love. Sex is a double edged sword that can trigger violence, either during the course of its expression or by reactions against it: the burning at the stake of homosexuals in medieval times, or throwing gay and transgender people off tall buildings in our time exemplify that. Sex can become compulsive and self-destructive, or it can be a portal to the subconscious and serve as a tool to demystify and articulate human nature.

In the 1890s, over a half century before Alfred Kinsey helped to birth the Sexual Revolution, German playwright Frank Wedekind explored sexual expression through his pen and his flesh. Like his contemporary Frank Harris, his considerable apprehension of things carnal came through his writing. As the Victorian century was concluding, the West’s resistance to sexual inquiry was also being challenged by Oscar Wilde and Sigmund Freud. The women’s suffrage movement was laying the groundwork for political action later in the 20th century which would champion women’s autonomy over women’s own bodies. Wedekind’s views on abortion and homosexuality anticipate second wave feminism and post-Mattachine-Bilitis gay liberation. He’s the very definition of the man ahead of the curve.

However, unlike the 21st century west, young people and many adults lived sheltered lives about sexual realities. Spring Awakening tragically reflects that.

Even sex for sanctified procreation can only be vaguely alluded to or steeped in misleading warm and fuzzy stories about love, that most enigmatic of concepts. Thoughts of recreational sex are to be suppressed. Basic vanilla sex is certainly not open to inquiry at all. Fetishes? Forget it! Not just the fact of a fetish, but legitimate curiosity about how it came about in the psyche of the fetishist. Today we realize that such curiosity can actually benefit understanding of human psychology.

Fetish and taboo emerge in a scene where Wendla requests that Melchior, the musical’s protagonist, spank her. When he finally agrees to it, he feels intense pangs of guilt that run quite counter to the libertine spirit he typically emanates. She explains to him that it’s what she wanted and doesn’t perceive it as a violation. Lydia Wagner’s performance is touchingly sensitive in the utter innocence elicited as Wendla expresses this mysterious need. As with other sexual expressions that Spring Awakening addresses, they’re presented as an organic part of what it is to be human.

Charismatic Benjamin Rubinstein crackles as renegade Melchior. We see a youngster whose brilliance hasn’t caught up with applying it to life situations (quite possibly like Wedekind himself as a teen). He obviously needs a nonjudgmental enlightened adult to confidentially discuss his prodigious thinking on sexuality and social restrictiveness. Tragically, the town has no space, either mentally or as a physical location, for this. There’s only church where little has changed since Martin Luther. In the 1890s such discussion outside of primarily urban circles would have been unavailable; and urban areas also had their own version of socially entrenched sexual shame.

What we see nowadays as religious ultra-conservatism was the overarching norm throughout the West. Therefore, when Melchior’s private writings are discovered, it sparks reactionary outrage – echoes, perhaps, of the fear of the thoughts of one Marquis de Sade, whose views of sexual kink and sadism traumatized Roman Catholic Europe the century before and in the earlier part of the 19th. To be fair, one can understand why those views had that effect. He took the idea of fetishization to horrific extremes. Though as Simone de Beauvoir boldly asked: “Must we burn Sade?” That remains a confrontational question for the puritanical, the supposedly sexual liberal, and the actually sexually liberal today.

The Chameleon production has re-imagined the character of Moritz, Melchior’s troubled friend, as transgender, in a delicately magical performance by Henry Ellen Sansone. Though trans was not a concept then as we currently perceive it, that doesn’t mean it didn’t necessarily exist. Again, inquiry, conceptualization, and finally vocabulary were yet to be entered into and formed in society at large.

We hear the term ‘shame’ tossed around loosely nowadays, but Sansone’s performance truly penetrates how horrendous the psychic bodyblows of shame can actually be on a young person with no place to turn for rational information. This does not only apply to physical and emotional desire, but to how institutionalized education can butcher the souls of young people, and which parents blindly feed into. The issue of irrational pressure on young minds to parrot information is just as urgently put forth in the musical, and the original drama, as is the problem of erotophobia. Moritz reaps the cruelty of of both and has become more fragile as the effects of that accumulate. Moritz is truly a victim of society.

Grant Ruckheim and Cris Sanchez Carerra beguile with subtle homoeroticism, beautifully played, in a scene where two boys dissolve their fear of expressing attraction to each other. This gives more evidence for why the original play was banned. An effervescent Suzie Juul charms with free spirited fluidity as Ilse, a youngster who has broken away from the town’s stranglehold to experience a more liberal, if not liberating, lifestyle. Though today’s Zero-Tolerance progressivists might well see Ilse as a victim herself.

Wendy Short-Hays and Joel Raney give maddeningly potent performances in various adult roles wherein their characters deliberately and unconsciously thwart the well-being of the young, thinking they’re doing what’s best for them. Short-Hays has an exquisite, though rightly anguished moment for the audience, where a mother she plays is on the brink of giving mental space for her son’s sexual awareness, but then quickly retracts.

The entire ensemble rocks with terrifically bopping choreography by Jackie O’Neil. Music director Dale Miller’s musicians and Brody Meinke’s vocal direction have stirringly achieved an artful contrast between high octane forcefulness and tenderly soulful sensitivity. Forest Godfrey’s sound design and Becky Raines’s lighting enhance the atmosphere with an evocatively expressionistic edge. Emma Kravig’s costumes and Terri Ristow’s props locate the place and the time vividly amidst the minimalist staging. Gilman’s minimalism is expertly realized so that the audience experiences the shadows of 19th century parochialism alongside an anarchistic spirit that thunders throughout with heavy metal muscularity he has deftly balanced with flower childlike vulnerability.

Wedekind is considered by some to be the great playwright of his time, surpassing Oscar Wilde. However, like Wilde, and like Kinsey later, he could be reckless. His insights on sexuality didn’t necessarily correspond with what we think of now as functional relationships. The specter of sexual shame, as unreasonable as it can be, also stands alongside that specter of venereal, i.e. sexually transmitted diseases. In those days, STDs generally meant excruciating physical agony, hence, a suffocatingly tight lid was kept on sex.

Wedekind, however, gave us a portal through which we can enter to wrestle with these issues. This portal was nonexistent a little over a century ago, except in a few select places. That said, it must be recalled that the controversial philosophy of German Friedrich Nietzche had been pulsating through the 19th century and his thought assisted immeasurably in sewing the seeds of change in parochial Europe. His book, Beyond Good and Evil, was seen as liberating, as well as nefarious. One imagines that Melchior had been touched by his ideas. Wedekind most certainly was.