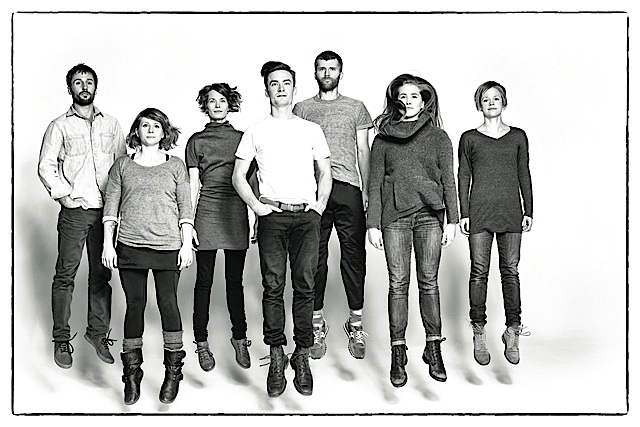 Kicking off the 20th anniversary season, ARENA Dances presents Plastic Language, an evening-length trio that deconstructs everyday moments to investigate their simplest form. Inspired by the surrealist works of painter Miro, this avant-garde work undulates between confined and open spaces as dancers attempt to establish communication between each other.

“I had this feeling that modern dance was dead,” says Mathew Janczewski, ARENA’s founder and artistic director. “People were not exposed to it, and didn’t know about it. I felt like we were performing for audiences who were hardly there — physically and psychologically. I was newly interested in my process, questioning, ‘What does inspire me? What do I do with that?’ I came up with the idea of taking the everyday and abstracting it. I believe that everyone dances, yet we’re societally taught not to be expressive. It is a form a communication — a central theme to the work.”

With this piece, Janczewski seeks to blur the line between audience member and being a voyeur. This piece reveals the intimate world of three people, allowing the audience entrance into this special place. “It’s called Plastic Language because I feel like people didn’t know what modern dance was,” he says. “I’m a kinetic mover; I’m trying to communicate something with you! These communication struggles occur within the realm of the dancers, and between performer and audience member, and certainly in our day-to-day lives.”

The ARENA Dances 20th Anniversary Season is a 20-month endeavor of five concerts at four venues across the Twin Cities — paying homage to the theaters that have elevated ARENA’s artistic and professional excellence over its 20-year history. For Janczewski, it’s been fun going through old material, seeing faces of dancers that he’s gotten to work with, and play with them again.

“It’s been interesting looking back and saying ‘I was so young, and so blindly proud of what I was making’ — there’s something to say about that youth and innocence,” he laughs. “For Plastic Language specifically, there’s been a challenge to separate myself as [I was] a dancer in the original piece. There’s a fine line between wanting the dancers to be themselves, while maintaining part of the original essence of the work. When do I hold on to something, and when do I let it go? It’s necessary that the relationships are authentic. That’s what the piece is about — the world of the three people on stage.”

For this 20th anniversary season, Janczewski looked back at works that are strong representations of his voice, and the scope of his vocabulary, ranging from the theatrical to the highly virtuosic and technical. One of these pieces is Picturing That Day, a new work to be premiered at the Bedlam Theater in winter of 2015/2016. Inspiration came from gold sequin costumes and Gershwin – something he remembered from a journal entry over ten years ago.

But aside from that new work, the 20th season is about showcasing his favorites, and he’s got a lot to choose from. “When I was starting out, I was told by a mentor to just make a bunch of work,” he says. “Gary Peterson [Executive Director of James Sewell Ballet], gave me the advice to just keep making a bunch of work: ‘You’re young, and movement is just coming out of you. Just make it while you got it.’ With that said, I also pushed myself to make work really fast. I love that the brunt of the work is done — I can now go deeper into the details, and continue research where I left off. Audiences can expect to experience fine-tuning of these works, as dancers breathe new life into them.”

That repertoire that he speaks of goes deep. He calls it a classic Billy Elliot story; he remembers dancing to Rod Stewart before church as his family was getting ready. He grew up watching musicals — Gene Kelly was a hero of his because of his range and athleticism (“And he’s cute, to boot”).

“I finally worked up the courage in a small down to start taking dance classes. I went through that struggle of ‘a man can’t dance,’ and I didn’t want to be thought of as gay,” he says before joking: “It makes me wonder if I had started dancing when I was younger, if I would have burned out…or if I’d just be a total major superstar at this point.”

Super star status or not, he was living the life dance majors pray for: dancing professionally with Jazzdance by Danny Buraczeski before graduating college. He worked with countless independent choreographers (he wanted to do everything!) and started getting a bit of an itch to go to New York City. What dancer wouldn’t? But then he started doing his own work here.

“I was fortunate enough to have support right out the gate from the Jerome Foundation, and the McKnight Choreographers Fellowship,” he says. “I’ve been continually grateful for all the funding opportunities available for artists in the state of Minnesota — it is not something to ever take for granted.”

And that connection with Minneapolis stuck, leading to the founding of his own dance company. “I really enjoyed the Minneapolis dance community, and wanted to contribute,” he says. “Even when I was dancing for others, I was always off in the corner making up my own stuff. I realized from a young age that life was short — and I wanted to jump in headfirst.”

Each choreographer has different goals to accomplish through dance. For Janczewski, it varies from piece to piece. “I have an idea of something that I’m interested in, and begin to explore it,” he says. “This can be a concept, a piece of music, a painting, etc. I seek to create dialogue on subject matters I find pertinent to society, and the greater human experience.”

That vision has evolved over the years as he learns and grows from each experience. “My collaborative process with dancers has developed a lot over the years — learning how to create an atmosphere of play, and encouraging them be themselves,” he says. “I used to choreograph every little detail; that’s what I thought I had to do. I fused this play into my work, and over the years it has grown into an integral part of my creative process. I wasn’t so interested in pulling all the strings; I wanted everyone to have their own movement experience. I feel this gives the dancer more authenticity within the work. They’re involved in conversations, ideas and thoughts pertinent to the piece — and through them, the work reveals itself.”