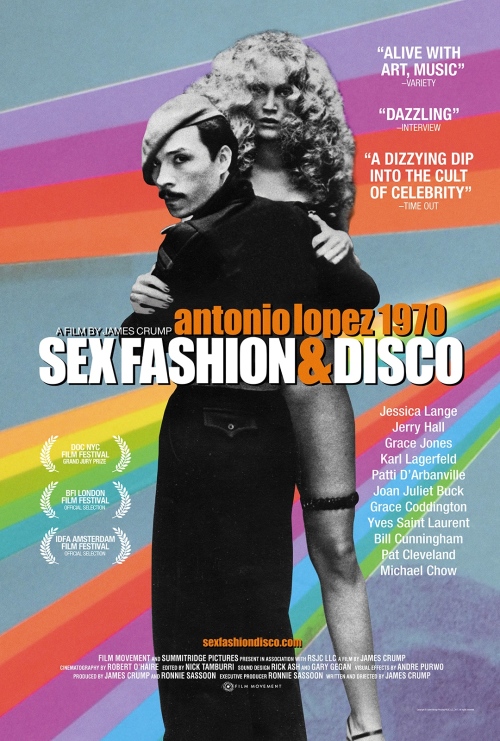 The groundbreaking renderings of Antonio Lopez (1943-87) are credited with turning fashion illustration into a serious art form. In Antonio Lopez 1970: Sex, Fashion & Disco, documentary filmmaker James Crump has captured the gleefully erotic abandon of 1970s New York and its subject’s unbridled lifestyle. Lopez undulated at the intersection of the Sexual Revolution and the elite fashion scene—a regular at clubs like Max’s Kansas City and a prowler seeking sex in various quarters, high and low. The Puerto Rican-born bisexual American lived by his impulses and some of those interviewed in the film suggest that he had a kind of psychic instinct that guided his work and his choices. Interviewees also add that Lopez tended more toward sexual relations with men, though his actual art was inspired more by women. Bare-breasted females permeate his work.
Minnesota-born actress and Oscar-winner Jessica Lange talks about “a sensuality—an exchange of energy” that Lopez kindled with his models. Antonio Lopez 1970 pointsout that he sometimes consulted a hypnotist when blocked creatively. Something Crump puts forth, whether deliberately or unconsciously, is how the illustrator’s hyper-energetic way of life was perpetually propelling him to create, create, create! He is described as “voraciously sexual”. Though the era is renown for its drug excess, buttressed by the cliche “sex, drugs, and disco”, Lopez’s gift didn’t seem to be drug-induced as much as it was a genuinely unique quality he was born with. He loved beautiful people and they stimulated and inspired him exceedingly.
Some will see Lopez, the man, as a ’70s stereotype who loved the night life, loving to go out to boogie, and sleeping around—and who was not the least bit ashamed of any of it. He was the carefree upside version of the gay man looking for Mr. Goodbar. But as Crump reflects on the man’s activities, this was part and parcel of Lopez’s ingenuity. Though he is described as “voraciously sexual”, something that could sound judgmental, it validates the view that living a wild life, in Lopez’s case, forwarded and fulfilled what seems to have been his divine purpose. His long-time association with Juan Eugene Ramos, both romantically and professionally, is chronicled as he goes on to become a big name in Paris where he bonded with Karl Lagerfeld and Yves St. Laurent, two designer icons who were both attracted by and resistant to Lopez’s free-wheeling personal and artistic style. Their interrelationship was turbulent, fascinating, and productive.
Antonio Lopez 1970: Sex, Fashion & Disco also relates how its subject was drawn to bondage-oriented sex encounters as his life progressed. However, Crump isn’t interested in deeply examining the man’s personality. He is more about celebrating Lopez’s spontaneity and caution-to-the-wind individuality. Indeed, those elements come through the film quite vibrantly. The great illustrator, who died of AIDS, seems to have been like a marvelous fire that flamed for a time and then was sadly and swiftly pinched out.
Antonio Lopez 1970: Sex, Fashion & Disco
Lagoon Cinema, 1320 Lagoon Ave., Minneapolis
(612) 823-3020
www.landmarktheatres.com