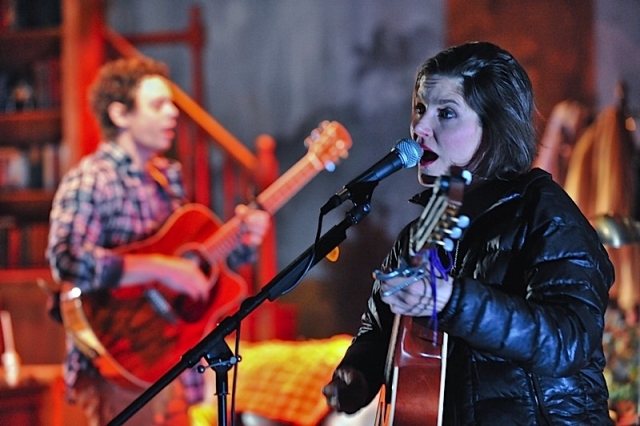 Closure is one of the biggest issues all of us must contend with as human beings. When we don’t find closure regarding traumatic events — which we all have — the ramifications spill over and bleed into our life stream. Playwright Michael Elyanow has ingeniously structured the problem of closure on three tracks in his extraordinary new play with music, Lullaby, now in its splendid world premiere at the Ritz Theatre. It is part of Theater Latte Da’s Next 20/20 new works program and ranks among the theater’s best productions in recent years.

The three tracks portrayed are a young straight widowed mother who is (1) haunted by the suicide of her guitar-playing husband and (2) by her unwillingness/incapacity to forgive her alcoholic mother. Then there’s an older lesbian musician and bar owner devastated by emotional wounds of her ex. 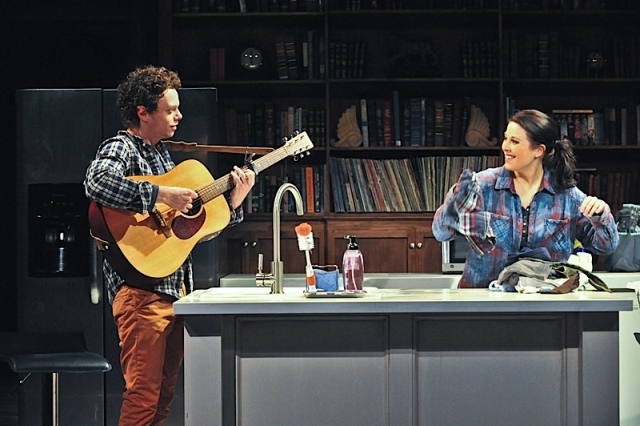 The former, Cassie (Adelin Phelps), desperately wants to learn to play the guitar so she can bring harmonious music into her baby’s life now that the father is gone. Today’s Trey Parker mentality will surely find much to mock about this, but Elyanow is clearly someone deeply in touch with real, fundamental feelings. On the other hand, Cassie’s unforgiving resentment toward her neglectful mother has warped her connection to reality. Phelps also lives into these layers beautifully. I’ve been watching Phelps over the fast two years and have been impressed with her work; this is the best work of hers that I’ve seen yet.

Cassie seeks out a guitar tutor at a lesbian bar, which owner-performer Thea (Annie Enneking) proudly proclaims as a “dyke” zone, despite the politically correct word-policing of our time. The defensive misunderstandings between the two women when they first meet are charmingly funny and point to the patience queer and straight people both need to navigate the early phases of platonic relations. 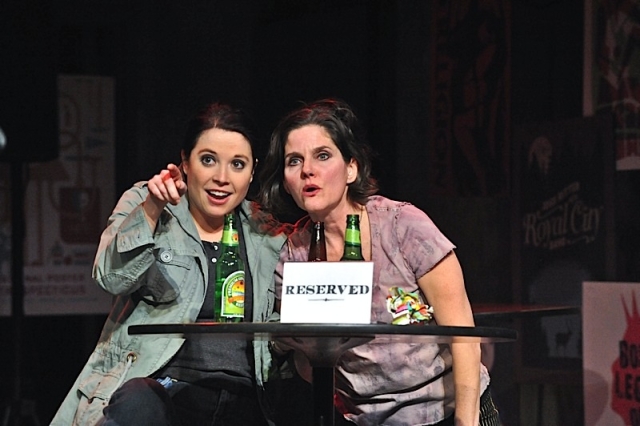 In recent years, Enneking has distinguished herself as a topnotch stage combat director, but for those who have known the local theater scene, she is a brilliant veteran actress. Though I can’t say I have seen all her performances since she was named Lavender’s Best Actress for Frank Theatre’s production of Mother Courage 10 years ago, this is clearly memorable as well. Enneking brings a grit and ravaged beauty to Thea that you simply cannot take your eyes off. You sense the woman’s emotional wreckage and her struggle to be generous enough to forgive at the same time. When the younger Cassie misinterprets Thea’s struggle on her (Cassie’s) own mistaken terms, sparks fly in a way that is utterly visceral.

Though very much a women’s play, Elyanow has also written two fine male roles for Lullaby which are played to perfection at the Ritz. David Darrow is winningly mercurial as a phantom visage of Cassie’s dead husband whose neglect of their infant was understandably more than she could bear. It’s very easy to come down against a parent who does wrong by their kid, but Darrow embodies a young man who needed help in this difficult world we live in and in which too little is done to help struggling young people. As Bertolt Brecht once wrote: “man needs help from every creature born.” 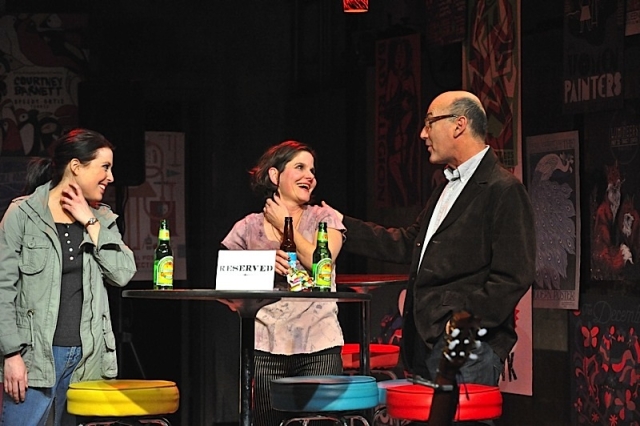 James Eckhouse gives a powerfully endearing performance as Gabriel, Cassie’s deeply compassionate father, a man who refuses to give up on his daughter and a wife in perpetual rehab, who has drained him of resources and precious energy. He stands by the women in his life. Gabriel raises some profound questions about our duty to stand by or not, those we love, in the face of seemingly irrevocable dysfunction. I see him as an emotional hero. It is thrilling to see Eckhouse back on a Minneapolis stage. He was in Garland Wright’s iconic Guthrie production of Candide in the early 1980s and he has evolved well.

Elyanow’s husband, Jeremy Cohen, has movingly directed Lullaby with emotional intricacy, vulnerability, and classic style loosely reminiscent Neil Simon. Matched with Geoffrey Curley’s set, you get the feeling you have entered into the actual lived-in world of the characters. As if you could lounge on the sofa beside them. The songs by Chris Dallman, Garrison Starr, Curt Schneider, and Elyanow elicit a soulfulness that tugs at the heart. Not to be missed.