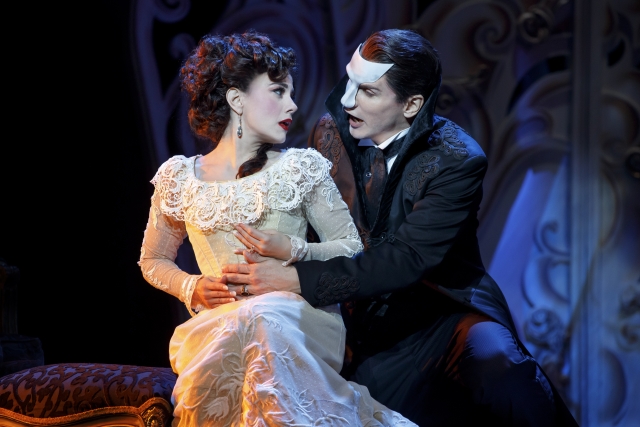 You don’t have to have seen Andrew Lloyd Webber’s The Phantom of the Opera to enjoy Love Never Dies, his sequel, now on stage at the Orpheum Theatre. However, if you have seen it, you’ll witness a fascinating follow-up that logically and imaginatively ships its Parisian characters across the Atlantic to New York’s Coney Island. Frederick Forsyth’s book, The Phantom of Manhattan, is the basis for Ben Elton’s book for the musical, with lyrics by Glenn Slater. Lloyd Webber’s music score is characteristically majestic, moving, and blended into a mature romantic narrative. The sequel seems to be more in the same time frame as the Phantom original, but nonetheless, it still captivates with stage beauty, great voices, and thorny love rivalries.

Love Never Dies is actually set 10 years later after Christine the soprano and the Phantom go their separate ways at the end of the original. The sequel begins as she, husband Raoul, and their young son, Gustave, go abroad with the expectation that Christine will sign a lucrative performance contract. Unfortunately, her career and marriage to the no-longer-virtuous Raoul have deteriorated into performing to pay his gambling debts, not to mention, his liquor. Meghan Picerno and Sean Thompson play the roles with a strikingly conflicted sense of a marriage on the rocks. The characters are still young, but their strained relationship has diminished from the shining vibrancy they gloried in a decade earlier.
When the couple comes into awareness that it is the Phantom (a splendid Bronson Norris Murphy) who has lured her there and thence to his Coney Island digs, the flaming passions of the love triangle propel the action toward an exciting and unique conclusion. The characters are no longer black and white as in the original. We have mixed feelings about all three, even Christine. The archetypes have become humanized while retaining their fundamentally classical essence. This is perhaps Love Never Dies’ most significant embedded aspect.
Picerno and Murphy deliver commanding vocals under Dale Rieling’s fine music direction, that often bedazzle. Jake Heston Miller and Christian Harmston alternate in the role of the vulnerable Gustave, Christine’s young son. A stately Karen Mason as the haughty dance instructor, Madame Giry, and a charmingly gritty Mary Michael Patterson as her daughter, Meg, are feisty flies in the Phantom’s ointment. Despite his supernatural powers, these tough women are righteously angry because of his exploitation of them since joining him in America years ago. This element is deftly underplayed by the actresses.
Love Never Dies is interwoven with major phantasmagorical threads that run throughout. Circus figures, outcasts of conformist daily life, engage with the “ordinary” characters. A sparkling Katrina Kemp is especially delightful as Fleck, the spiritual leader of sorts of the production’s wonderfully mischievous circus ensemble. The carnivalesque Coney Island look is contrasted with shrewdly expressionist design motifs to reflect the “normal” world. Set and costume designer Gabriela Tylesova and lighting designer Nick Schlieper gorgeously vivify that contrast. Love Never Dies, artfully directed by Simon Phillips and fluidly choreographed by Graeme Murphy AO, is a humbler production than the Phantom original. But nonetheless, it enchants while making us muse on how relationships change as we confront the vicissitudes of life.
Love Never Dies
Through July 1
Orpheum Theatre, 910 Orpheum Theatre, Minneapolis
(800) 982-2787
www.HennepinTheatreTrust.org