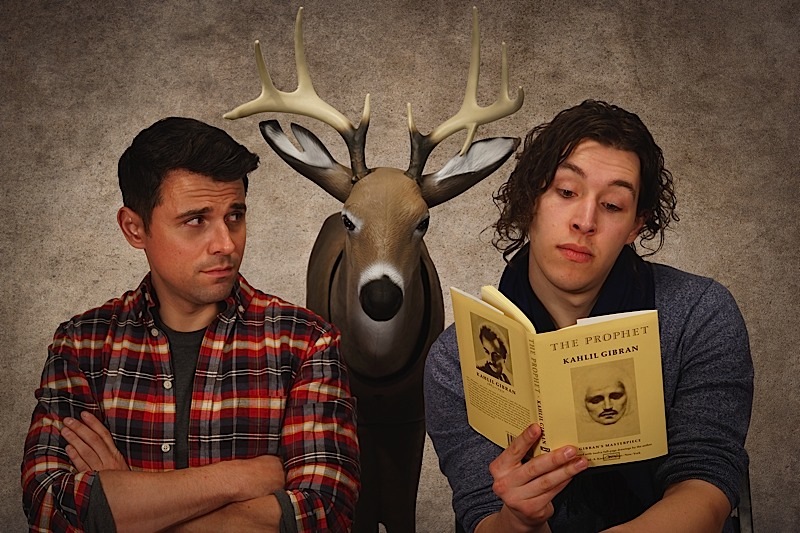 Sons of the Prophet by Stephen Karam was not only a 2012 finalist for the Pulitzer Prize but it won the Drama Critics Circle, Outer Critics Circle, Lucille Lortell, and Hull-Warriner Awards for Best Play. It contains a richly layered relationship between two gay brothers, which is part of a larger canvas that examines the American “Melting Pot” ideal, health care in crisis, the overvaluation of high school athletics, the murky emotional no-man’s-land between prolonged self-pity and reasonable and legitimate anguish, and grief and suffering in general.

Park Square Theatre’s production, beautifully directed by Jef Hall-Flavin, glistens with all these big ideas and themes in a luminescent theatrical experience. Gay brothers Joseph (Sasha Andreev) and Charles (Maxwell Collyard) are reeling form the freakish death of their father. Their mother is also deceased. Their core connection to their own personal pasts and their Lebanese Maronite heritage is their uncle Bill (an endearing Mike Tezla). The nephews cringe at Bill’s dated attitudes and his shades of bigotry but they love him nonetheless. Moreover, like so many contemporary queer people they dwell in political correctness and feel compelled to police language and fix situations that fall short of politically correct ideals. (The play is set 10 years ago and Karam seems to have prophesied what is now a huge issue again in the GLBT community. The Catherine MacKinnon-Andrea Dworkin-Sharon Sayles Belton era was similar in many ways 25 years ago.)

The tightly wound Joseph, once a star athlete, is haunted by unexplained ailments though he is not a hypochondriac. Karam seems to be musing on the idea that we may be verging on a dark period of disease that the current medical paradigm is not able to comprehend. He’s lucky enough to get medical coverage through a part time job in which his boss (a hilarious Angela Timberman) goes out of her way to express concern for the plight of the Lebanese.

Charles embraces his inner feminine and provides a stark contrast to brother Joseph. Andreev and Collyard achieve an uncanny relationship that feels as if it came out of life itself.

On another level, Sons of the Prophet has a mystical element throughout that may be spirited forth by the brothers being descendants of sorts of Lebanese poet, Kahlil Gibran, author of The Prophet, as well as their Maronite Christian legacy. This emanates in a sublimely played scene between Joseph and a woman from his past played by a terrific Sally Ann Wright. Both are going through a period of physical healing therapies. A sense of synchronicity permeates the scene as they are locked in some kind of Time Passage, as if out of Al Stewart.

Joseph Stanley’s set, Michael P. Kittel’s lighting, and Katherine Horowitz’s sound design seem to ride a shimmering current of metaphysical energy into the heart of grief, suffering, and hope. Not to be missed. Yet another example of how Park Square has come to be on a level truly equal to the Guthrie, Mixed Blood, Penumbra, and Jungle Theaters.