An Interview with the Post-Sexual Revolution’s Emblematic Playwright, Christopher Hampton, Now Being Celebrated by the Guthrie Theater 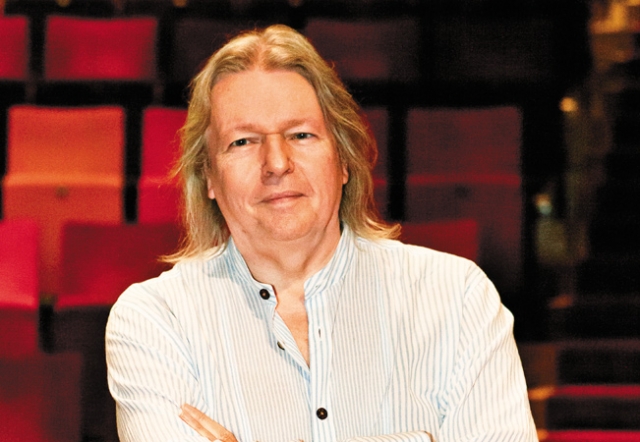 The Christopher Hampton Celebration at the Guthrie is a must-see for anyone interested in sexuality and gender. When you see the productions of Appomattox, Tales From Hollywood, and Embers, you will surely be struck by the way we think of the human body and its presentation – how that changes because of historical time and location. For instance, in Appomattox the contrast between the way Americans moved in the 1860s and the 1960s is amazing. But Hampton’s consciousness about that stems in part from the fact that he has written some of the most penetrating plays and screenplays about sexuality, including two of Great Britain’s foundational ‘gay plays’ in the years soon after British film director Basil Dearden’s landmark gay-themed film, Victim, which made an impression on Hampton.

In the 1960s Hampton penned two bold gay-themed plays when it was still considered obscene by a critical mass of the population: When Did You Last See My Mother?, and Total Eclipse, a drama about the turbulent intergenerational relationship between poets Paul Verlaine and Arthur Rimbaud. His 1988 screenplay from his Tony-nominated play, Dangerous Liasons, won him the Oscar and the film should have won Best Picture. In 1995 Hampton directed and wrote Carrington, starring Emma Thompson. It transgressed with notions of monogamy and bisexuality. He was Oscar-nominated for 2007’s Atonement: he was robbed of it (screenplay), as well as the film being robbed of the Best Picture Award over the apocalyptically sensationalistic No Country For Old Men. (The Cohen Brothers are geniuses but the precious media slaver around that film was grotesque.) Atonement looms as one of the greatest pictures ever made about the tragic consequences of false accusation of child molestation. Last year his electrifying screenplay for A Dangerous Method, astonished with bold speculation on erotic desires of Freud, Jung, and the woman they coveted.

I spoke with Hampton about his early gay-themed plays. With When Did You Last See My Mother? he became the youngest playwright to have a show on the West End, London’s equivalent of Broadway. And Total Eclipse is a raw look at homosexual desire.

JT: You wrote When Did You Last See My Mother? in 1964 when you were 18. And it played at London’s Royal Court Theater. Tell me about that.

CH: It was a very, I suppose, provocative play because I was young and I wanted to be provocative. It was written rather casually and quickly and because I’d never written a play before and I had no reason to suppose that anyone would ever do it. I eventually managed to get it done at Oxford and I acted in it myself, student cast. And that’s how it got noticed and picked up and eventually made it to the Royal Court and the West End in ’66. Sometime in the ’70s I sort of was embarrassed by the play – not for any content reasons, but because it just seemed crude to me and I thought that I’d got better and moved on . And so I didn’t republish it and I didn’t allow it to be performed for 30 years. And then a couple of years ago, this young woman called Blanche McIntyre, a very promising young director, came to me and said she would like to do it. I said, oh my God, no. And she was very persuasive and in the end I said, oh you can do it.

So it was revived in London about 18 months ago and for the first time in 35 years. It had been so long since I had seen the play or thought about it that in rehearsals I couldn’t actually quite remember what was going to happen in the next scene. The play was very, very well received again and I realized something about it. And of course, I didn’t realize it at the time: it’s very, very much of its time and it’s a play which is rooted in the attitudes of the ’50s, except there’s this central character, who looking back on it – he’s confused. He’s conflicted and he’s fighting people and he’s confused about his sexuality and all that. But he’s the ’60s. He’s sort of the ’60s emerging.

JT: Do you see yourself in Ian?

CH: Oh yeah. But really the part was written for me. At that stage I wanted to be an actor. So I wrote myself a great showy part. I played it and when we came to do it in London at the Royal Court, they found an actor called Victor Henry who was spectacular. It made his career. He had a very short career because he died in a hit and run car accident in his 30s. But it made his career and it made the play. The reviews of the play, when it first came out, were full of stuff about Victor being the most exciting new actor since Albert Finney and so on and so forth. Actually it was when I saw Victor do this play that I thought, move on from acting. Leave it to people who know how to do it.

JT: And after that was Total Eclipse.