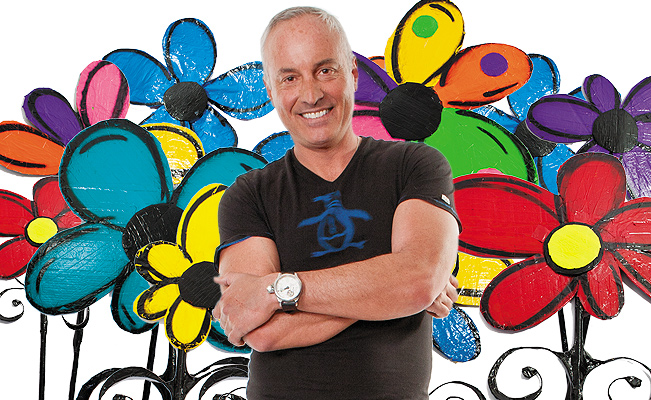 A bright flower suddenly appeared on my Facebook wall. I’d been virtually flower bombed. A new friend with David Cook, I’d only heard that he’s an artist who has taken to flower bombing the Twin Cities with large, theatrical flower sculptures…portable enough to be “planted” wherever he felt the landscape could use more brightness and beauty. With such a late spring this year, he had plenty of blank canvasses to choose from, including scrapyards, the Minneapolis lakes, boulevards in Edina, various churches, and the river.

David grew up in Minnetonka, but draws inspiration from having lived in various locales such as Los Angeles, New York City, Chicago, and South Dakota. Now back in Minnesota, he co-authored a book (which is being made into a musical) with Janet Letnes Martin called Lemonade for the Lawnboy: The Executives’ Wives’ Cookbook Committee which is loaded with humor, recipes, paintings, and drawings of his memories of 16 fabulous upper-crust ladies in Minnetonka. Upon looking at the book full of art and humor, it’s easy to see how David would become someone who’d decide to beautify his surroundings by way of flower bombing.

Where are you going with the flower bombing?

Where am I going with these?  Honestly, I didn’t even know where I was going when I started.

When did you start?

Last fall. I started doing it around Hastings, where I live, in a scrapyard.

I walked the El Camino de Santiago in Spain. I walked 500 miles across Spain. Almost the whole way, there were all these sunflowers. They faced the sun and they were like humans.  They had these haunting, sad-sweet personalities like humans. The Camino colors in Spain are very much the colors of my flowers. Yellows, blues, reds, greens…that’s when I started it.  I was inspired by the Camino. How could I not be inspired walking a road that is 500 miles and 2000 years old? They came to life then in my head, but I didn’t know that until I suddenly did a whole body of work of flowers. I stayed up all night for four days in a row, painting flowers manically, because I had to. Flowers were just pouring out of me. I couldn’t stop.

Then, I started building them, the flowers. And then I wanted to put them outside. The contrast is so cool. So, I started experimenting. I put them next to the river, I took pictures of them in different environments. I put the photos on Facebook and people just loved them. Then, I started putting them in more public areas…which was fun.  I plant them, the flowers, and then I’d sit in my car and watch people with the flowers. I was sitting there thinking, “My God! People are really responding to this.”  And the beauty of it is, of all the work I’ve done in my life as an artist, I don’t have to explain this–it’s so simple. I don’t have to stand there and explain the flowers. Flowers make people smile, that’s it.

The simplicity and how fresh they are–I’ve been running around everywhere, flowerbombing. I just did the river and sat in the car for about eight hours. I just make the flowers. They’re there, they have their life, I just created them. For the first time as an artist, it’s not about me, it’s about the medium. I don’t need to stand there, it’s about the flowers.

I don’t mean for this to sound dramatic, but it is. These flowers have saved me. I’ve suffered from depression. I’ve been sober for six years. I struggle. Ever since I started doing this, I’ve noticed that the one or two down days are gone. It’s the flowers. Which is pretty cool.  I have a purpose as an artist. I feel like I’ve got more of a purpose than before.

I want other people to know that there’s hope. That’s what the musical is about–so’s the book. It starts out when I’m really screwed up and tortured and messed up and at the end, I’m cured of all the crazy shit in my head and I’m six years sober. I know in our community, guys–men–it’s really [prevalent] and I have six years now and there’s no damn reason I should be alive today…but I am.  Almost seven years in July. My life is great. Inspiring. I’m making people happy. I’m FLOWER BOMBING. What gay guy do you know who’s doing that?

Keep an eye out for David’s flowers around the metro area, the state, and the world. Be sure to buy his book on Amazon, available here. 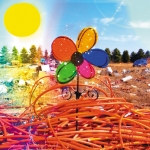 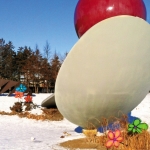 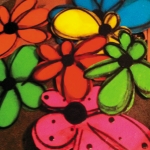 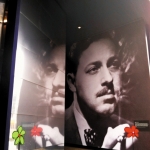 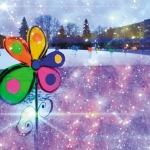 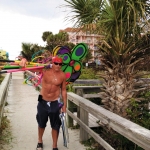 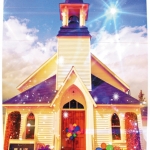 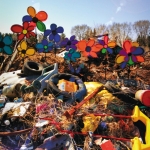 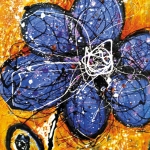