An Ingenious Inquiry into Religious Viewpoints — “Grace” on Stage in Osseo

Event photography of the stage production of Grace at the Osseo Minnesota Yellow Tree theater in spring 2017, outside of Minneapolis 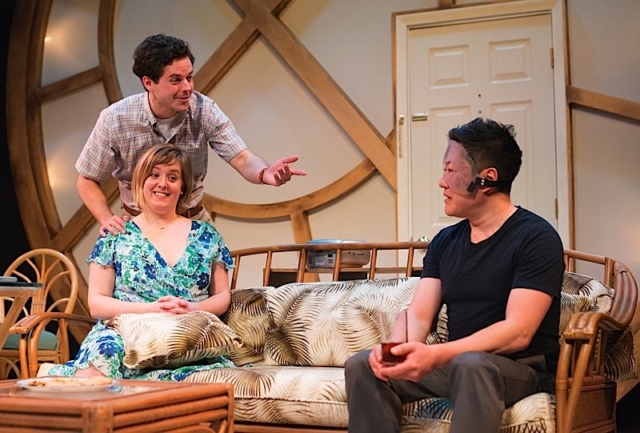 How religious views reflect individual personalities is ingeniously portrayed in Craig Wright’s play, Grace, now in a numinous production at Yellow Tree Theater in Osseo. When a married couple moves from St. Paul to Florida to open a chain of gospel-themed hotels they are met with challenging counterpoints in the form of a neighbor and an insect exterminator. What makes this play exceptional, if not miraculous, is that Wright and the cast, directed by Terry Hempleman, take these extremely opinionated characters to the level of real flesh and blood. Imagine the intellectual velocity of George Bernard Shaw blended with the emotional undercurrents of Marsha Norman.

Sara and Steve are devout Christians who may seem to the uncritical eye as if they are identical in their views, but Wright reveals how individual personalities can so differently interpret the same belief system. Steve (Jason Peterson) nervously awaits $9 million he expects from an obviously shady Swiss investor in order to launch the hotel project. He is an exponent (one might even say, a “victim”) of prosperity gospel theology wherein capitalism and Christianity supposedly and providentially go hand in hand. 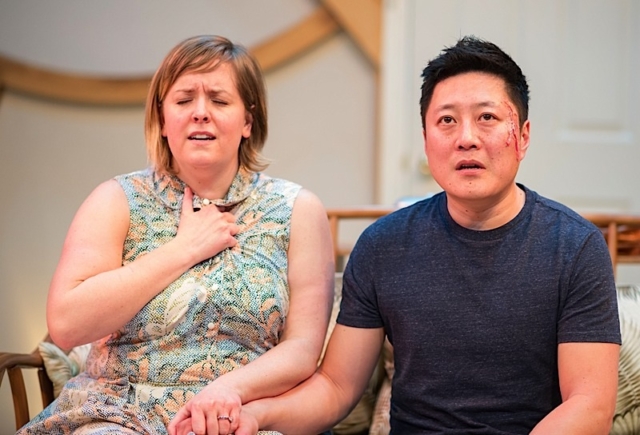 Steve has fallen into the trap of interpreting far too many occurrences as signs of God’s benevolent blessing and proof that he can take risks without dire consequences: as if testing God. His penchant for proselytizing feels like a desperate defense mechanism. It’s as if he needs to be reassured that his interpretation of God is on target. Peterson dynamically, yet poignantly, conveys a man who lives in state where euphoria over a dream seemingly on the verge of realization is underpinned by terrifying doubt.

Sara (Mary Fox) begins as a dutiful Christian wife and helpmate to her husband. She has found Florida to be lonely and her hope for the future is waning as the urgently expected money is overdue. Like Steve, she loves the Lord and will readily share that whether you ask her or not. That is, to a certain extent; she has enough instinct to know when it is wise to back off. She also knows that marriage requires ongoing deep communication with your spouse. Regrettably, this is a level that Steve has yet to reach. Fox and Peterson viscerally render the disconnecting of this relationship from start to finish.

The plot thickens when next door neighbor, Sam (Kurt Kwan), a NASA engineer, expresses his annoyance with their Christian music and seemingly sunny dispositions. But as lonely Sara pushes herself into Karl’s life, she learns he was recently injured in a car accident which killed his fiancé and seriously scarred his face. Nonetheless, Sara thinks he is still handsome and senses he would make a great father. Children are something her husband has been unwilling or unable to make happen. Fox brings out an uncanny sense of a woman at a crossroad in her marriage who fears that her maternal clock is ticking. (The word “crossroads” is actually used in the play as a name Steve wants the hotel chain to be called.)

Sam is not exactly agnostic, though his scientific outlook certainly affects his view of the metaphysical. He seems to be part of the quantum physics approach to spirituality that has come into the mainstream in recent years. There is a lovely interchange between Fox and Kwan where Sara vulnerably conveys to Sam how she regards her Christian faith. It stands in stark contrast to Steve’s in-your-face approach.

Kwan’s performance is devastating. There is a moment where the weight of the grief running through the character is so anguished it is palpable. A stunning stage portrait of grief.

Hempleman has not only directed the piece, but acts as well. He rounds out the religious views as Karl the exterminator in a devilishly gritty performance. Karl saw the brutalities of the Nazis in Germany as a boy and his bitterness has calcified throughout his personality. His bluntness disarms and charms at the same time. Any belief in a just and loving God was vanquished in Karl’s heart long, long ago. A devout nonbeliever, he weaves between the two condos where the other three live, snuffing out insects as he lays out his formidably challenging philosophy.

Wright’s comparisons of the four characters’ viewpoints are brilliantly balanced. Christian-bashers will find no place at the inn here. Though Steve’s Christianity is crudely self-serving, Sara’s faith interpretation integrates the world of emotion far more thoroughly than the other three. The scientific and atheistic are given fair shakes, reminding us that as much as we may dislike those views or worse, they are to be and should be reckoned with. Not necessarily adopted, but definitely reckoned with.

We know right from the beginning that Grace will end in a specifically tragic way. This is set up boldly in the first scene and it won’t spoil the rest of it for you. Moreover, set designer Katie Phillips’s imposing giant clock image overlooks the action adding a powerful sense of potential doom. We feel riveted to see how the dreadful impasse related at the beginning of the performance was reached. Thanks to a remarkable script, superb casting and Hempleman’s terrific grasp on human relationships, Grace, is a beautiful theatrical experience.