An Exquisite “Sense and Sensibility” at the Guthrie 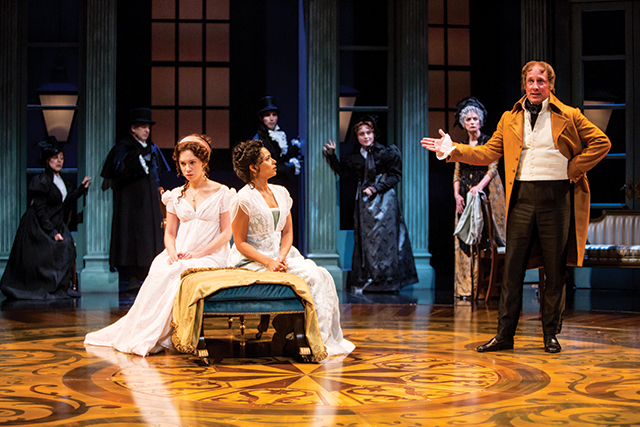 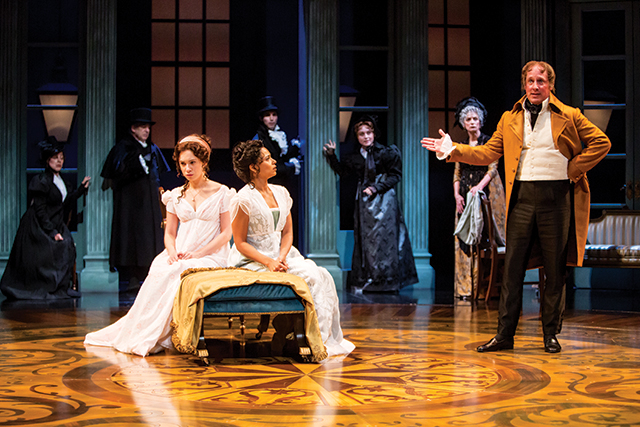 No one ever wrote about the delicate relations between men and women and the intersection of economic realities like Jane Austen. Kate Hamill’s superb stage adaptation of her first and hugely popular novel, Sense and Sensibility, distills the true essence of one of the greatest of novelist’s core concerns. The two unmarried Dashwood sisters lose the bulk of their inheritance and are thrust into a meager lifestyle. This means they are ineligible to marry in the eyes of various men of means. Austen examines how they strive to maintain their dignity as they grapple with this prejudice.
At the Guthrie, Alejandra Escalante plays sister Marianne, who personifies “Sense.” This means she lets her passions be known and her unfiltered thoughts pour out. It also points at times to her lack of reflection necessary for weighing out complex practical and emotional problems. That said, sense is a vital quality at some points.
Jolly Abraham as sister, Elinor, personifies “Sensibility.” She treads more carefully in how she navigates the class change she has been thrown into and she looks more closely and wisely at the character of the men who enter the sisters’ lives. Though this may ward off embarrassment, it doesn’t necessarily ensure happiness. Both actresses embody the Austen aesthetic and contrast to pure perfection.
The entire ensemble is exquisite in their representations of gender codes and privilege gradations. Sarah Rasmussen has directed Sense and Sensibility with whimsical imagination and an utterly channeled sense of the Austen spirit. Junghyun Georgia Lee’s minimal set design and Moria Sine Clinton’s costumes capture the era splendidly.