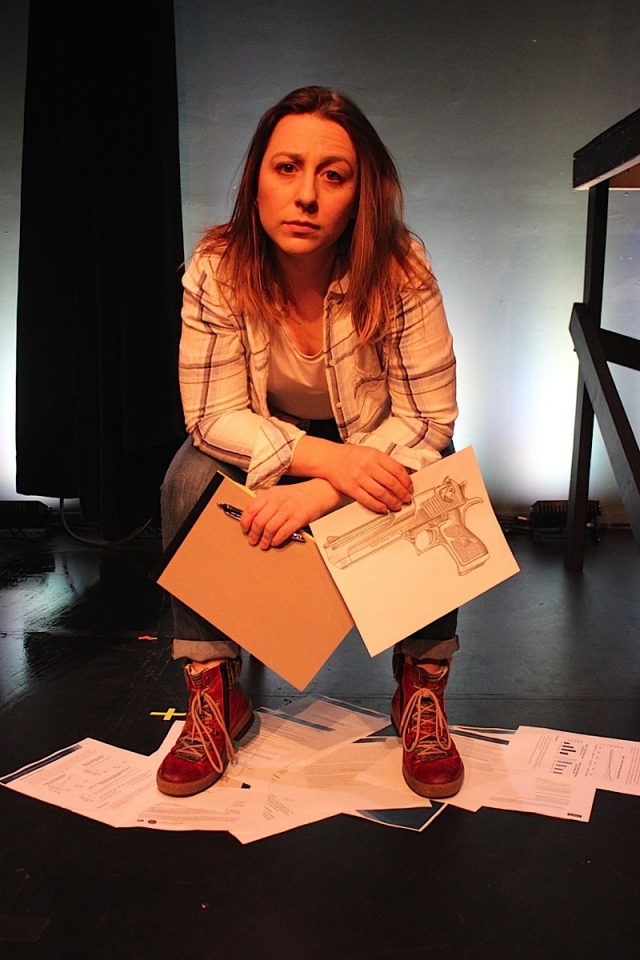 The polarization over the “true” meaning of the Second Amendment reached a point long ago where there can be no civil discussion about it. Panicked, therefore unhinged, all-or-nothing attitudes on both sides intimidate tens of millions of Americans who frankly see that both sides have relevancy. Playwright E.M. Lewis understands the toxicity of this division right down to her very core. Her personal stories and observations comprise her solo play, The Gun Show.

Lauren Diesch, who has made her a mark as an actress in some of the Twin Cities’ smaller theaters, is an absolute powerhouse in Uprising Theatre’s area premiere of The Gun Show. She masterfully sustains for its length of 65 minutes many variations of emotional intensity. In a play, and most certainly a solo play, the portrayal of a character written almost totally at a high emotional frequency is a daunting challenge to pull off and Diesch rises to that occasion with dynamic beauty.

Lewis’s multi-layered text satirically shows the absurdity of well intentioned safety tips that fail to credibly acknowledge the real dangers that a gun can impose for many people. Though she surely sees the value in and the right to self-defense, she realizes that not everyone is even capable, or healthy enough, to acquire the training to do so.

On the other hand there’s a brilliant line: “You don’t get to own the American story because you live in a city.” This refers to the real issue of living far away from police departments in isolated areas. In such areas the need for a weapon in cases of real physical threats, not to mention hunting, cannot be simply dismissed. Even us city-slickers know the same can be true of metropolitan (and suburban) police forces. Given frequent large 911 call volumes, it’s not realistic to expect their arrival at a threatening emergency to be as swift as a fast-food order at Wendy’s. Lewis’s line could also apply as a comment regarding those who would ditch the electoral college.

However, Lewis steps beyond just writing a damned interesting monologue and into the realm of numinous insight with observations that some will think of as taboo. And what’s taboo in 2019 can be quite different than what it was even during the first decade of this century, making The Gun Show a play for and of our time.

For example, Lewis, a woman, vividly describes with clear understanding the value of an older callously macho male relative whose political leanings lean far rightward from her own. She respectfully grasps that he holds his views based in his own earned experience and that she is special to him. Diesch, in turn, understands that it would be foolhardy to reject out of hand his specific concerns about guns given his expertise. Others would be so focused on disliking and judging the man’s personality that they would fail to see his legitimate concerns.

On the other hand, Lewis doesn’t excuse arrogant machismo. Contrastingly, a chilling description of a cop’s gratuitous callousness is eloquently shaped into dramatic language. Moreover, it must be noted that her script is scrupulously fair and balanced in how it represents police and military, hence, avoiding pitfalls of right wing glorification or leftist demonization.

Lewis also sidesteps orthodoxy when she considers that a criminal act, horrifically described, could be just as traumatizing as rape. It would be a spoiler to describe this here but when you hear Diesch relate it, brilliantly as she does, you’ll understand why. Especially if you’ve been either a victim of rape or hysterical gun violence as expressed in the text, or both. (Full disclosure: this writer has been a victim of both.)

However, Lewis’s description of going out shooting with her military veteran husband contains an utterly splendid cognizance of the beauty of primal masculinity. It is a sublime moment of the actress melding organically into the words of the playwright. The effect is utterly Melvillian. It’s as if the audience is going right into the wondrous wild with both of them.

Notably, director Emily England has wisely nurtured the mining of The Gun Show’s complexity by Diesch. It is the second play produced in Minneapolis this year to take on both sides of a profoundly polarizing issue. There was another miraculously evenhanded play, also remarkably realized—Roe by Lisa Loomer, a play about the divide in the abortion debate, at Mixed Blood.

Note: Though contemporary theater seems to have relatively few works that ably show both sides of charged political viewpoints, television has some stellar examples of work that does, going back to Perry Mason starring the legendary gay actor, Raymond Burr, and in this century, Without a Trace, which has one of the finest ensemble casts in television history. You may or may not perceive that balance in just watching one episode or two, but when watching several, that virtue becomes apparent.