An Enthralling “Equus” Mines the Sacred from Theatre Coup D’Etat 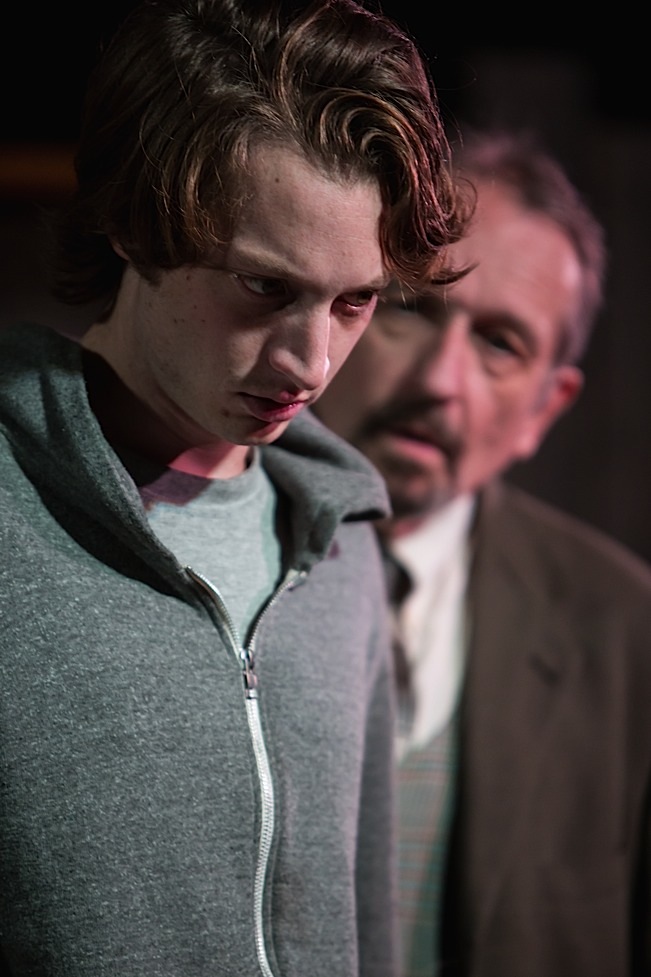 Equus by Peter Shaffer blew the lid off British theater in the 1970s. It is a play that lives alongside such novels as Anthony Burgess’s A Clockwork Orange and Doris Lessing’s Briefing for a Descent Into Hell and The Four-Gated City as a profoundly skeptical vision about psychological methods used to control people under the banner of social betterment. In our current era of medicated kids and psychologists hired to advise on torture, it strikes a new chord for a whole new generation.

When 17-year-old Alan Strang blinds a stable of horses he is sent away to a clinic to be observed and analyzed by Dr. Martin Dysart, a psychiatrist. As Dysart confronts Alan’s resistance to his inquiry he uncovers how the youth’s parents have unwittingly inflicted their belief systems (mother Dora is a devout Christian, father Frank is a solid atheist and socialist) so that he is driven to a pagan alternative that is socially unacceptable. He also sees how sexual contact made at a vulnerable time in one’s youth can be a recipe for catastrophe. Note, that this is a point not made from a puritanical viewpoint, but one that simply realizes that sex is a mighty power and must be integrated incrementally at the rate befitting the individual.

James Napoleon Stone has directed the current Theatre Coup D’etat production of Equus with bold and penetrating power. Shaffer’s is a drama which, if misdirected, could lead us to take sides against various characters. But Stone rightly disallows us that. We seriously doubt the conclusions many of them have drawn, yet we feel an aching sympathy, if not empathy for them, knowing they’ve done the best they can with the understandings they possess. We are also left with the idea that desire is often very, very mysterious. Moreover, this production makes it clear that Shaffer is warning against the damaging psychic impact that religious images we take for granted can make on impressionable minds.

Charles Numrich as the eloquent Dysart is exquisitely nuanced. He relates a middle-aged man searching his soul, his mind and heart gripped into an interior wrestling match. Dysart has reached career success only to gravely doubt the goodness of what he is doing. Numrich has an ease and vulnerability that is disarming and numinous.

Kevin Fanshaw bares Alan’s soul and reaches into deep recesses within to viscerally reveal the youth’s terror and his ecstasy. It’s a brave performance that enters the mystery of sexuality at odds with the mundane mediocre world that corporatism and belief systems are systemically and constantly reining us into. Many of us know this harnessing of our humanity is soul-deadening but we habitually go into denial mode and let it slide. Fanshaw also portrays viscerally how violence and sexuality are often intertwined within young people, and especially in males.

Ellen Apel and Brian Joyce are utterly heartbreaking as the parents. Yes, we see how mistaken they may have been, but their sense of humanity is palpable. Kelly Nelson is terrific as Dysart’s associate, who, with best intentions, constantly prods him to “cure” Alan. Hers may be for some the most challenging performance to watch because most adults will be inclined to gravitate to her view. And with perfectly good and humane reason. But Shaffer doesn’t allow her words to placate us. This is not a play production that placates. Lauren Diesch, Jim Ahrens, Meagan Kedrowski, and Jeff Groff round out a marvelous cast that goes the distance and beyond. Mark Kieffer’s lighting and Morgan Groff’s costumes fit the action to fine effect.