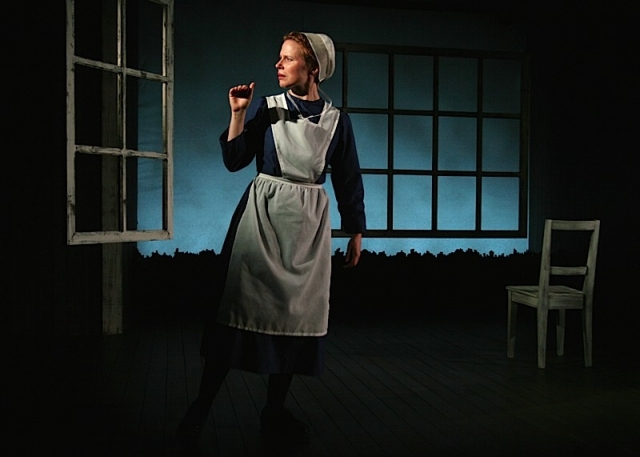 Writer-performer Jessica Dickey uses the Nickel Mines, Pennsylvania horror of 10 years ago as a springboard for her solo performance, The Amish Project. Playing multiple characters she masterfully and movingly imagines what might have been going through the minds and hearts of those effected by that grisly, senseless event. Gunman Charles Carl Roberts IV set up a hostage situation in a one-room schoolhouse, murdered five Amish girls, injured five others, and killed himself.

The schoolgirls and the socially stigmatized widow of the murderer are among those compassionately portrayed by Dickey. The Amish Project is a remarkably evocative inquiry into the wonder and power of forgiveness, as the Amish have made that a cornerstone of their belief system and actually do embody that, by and large. Dickey makes that central to her piece.

That said, The Amish Project, though it benefits from Dickey’s diligent research about Amish culture and the books of Donald Kraybill, admittedly does not reflect the actual figures on whom the characters are inspired. The words and thoughts of the characters are spun out of her excellent dramatic imagination. One wonders if this is taking too much of a liberty or not. The performance also alludes to child molestation musings about Roberts that were actually not realized in the historical situation. Dickey really needs to go back to re-writes on this. Clarification please!