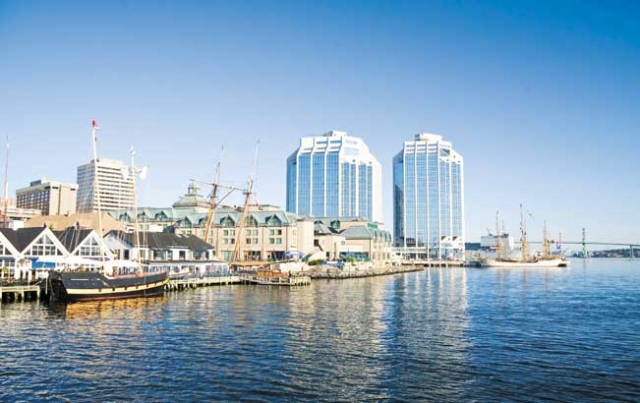 Talk about prime real estate: Ever since Viking times, folks have flocked to Halifax, charmed out of their skins by its perfect harbor—a deep, 11-mile basin guarding the Atlantic. The Scots named the province Nova Scotia, even though they didn’t stick around. Next came the French, only to be exiled from Acadia by the Brits, who founded the city in 1749. Some of our own Founding Fathers coveted the territory as our 14th colony, too. (That’s what the War of 1812 was all about.)

Today, tourists like me bounce over the border, lured by that ultra-gorgeous waterfront, filled with sailboats, fishing vessels, cruise liners, and a baby seal who blinked at me from below the curvy boardwalk that serves as the town’s front porch.

Joggers pad past bright banks of flowers, the kids’ playground, the sprawling Adirondack chairs, the piers where tall ships hoist their sails, and the open-air cafés. Marine artifacts make themselves at home in courtyards: anchors big as minivans, ropes coiled like giant cobras, even a pillory to chastise miscreants. 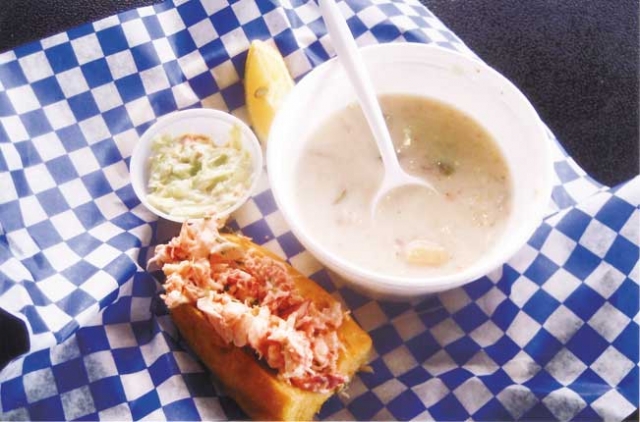 But nobody actually misbehaves here. I asked my taxi driver what he liked about his hometown, and he didn’t need to pause for thought: “the friendly people.”

It’s a love affair with the ocean.

The harbor’s Maritime Museum tells the backstory, from the first fishing boats to wartime torpedo carriers to the cargo of TNT that exploded in the harbor in 1912, leaving Halifax looking like a tornado had rampaged it. The story’s a happier one at Pier 21, now the Immigration Museum, where Europe’s political and economic refugees first caught sight of their new land. 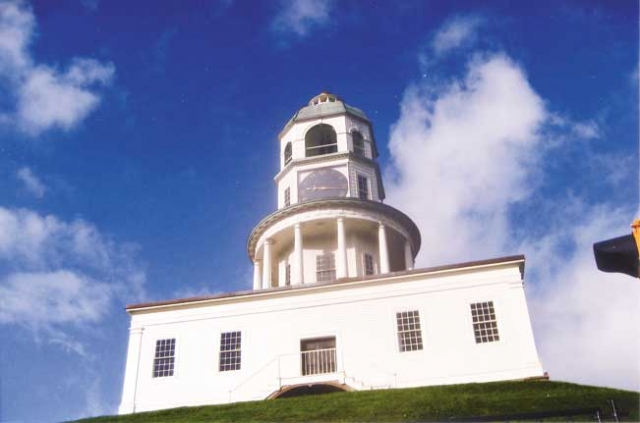 Then clamber up the looming hill above the harbor to explore the Citadel—a daunting defense fortress engineered by British Admiral Cornwallis the moment (well, almost) his ships set anchor. Today, it’s manned by manly Scottish Highlanders in full regalia—bushy hats, red coats, kilts—who pose for photos at the changing of the guard, play wheezing bagpipes, and fire off the cannon as tour groups obligingly squeal.

Down below stands modest St. Paul’s Church, the city’s oldest building, and not far off, the Old Burying Ground where Cornwallis’s sailors, and others, found their rest. Young Scot Alexander Keith made the voyage a bit later, eager to serve his fellow Britons, too. No, he didn’t pick up a musket; he opened a brewery. Today, it’s yours to tour in the company of costumed interpreters who explain the process and, more importantly, pour you a pint (which is probably why you signed on in the first place).

While the boys were drinking, their women were painting—at least, the talented among them, who now have a room devoted to their work in the city’s splendid Art Gallery. So do the aboriginals of the First Nations, along with Nova Scotia’s quirky outliers who carved their captivating folk art. Upcoming artists demonstrate that quirkiness has not diminished with works such as a Dream Catcher bra and a life-size grizzly composed of red roses. But the star is the province’s beloved elflike lady, Maud Lewis, the Grandma Moses of her day. Her tiny cottage, transplanted here, is a painted fantasy: tulips on the windowpanes;  a front door fluttering with birds; and flowers adorning the oven, the baking pans, and the lamps. 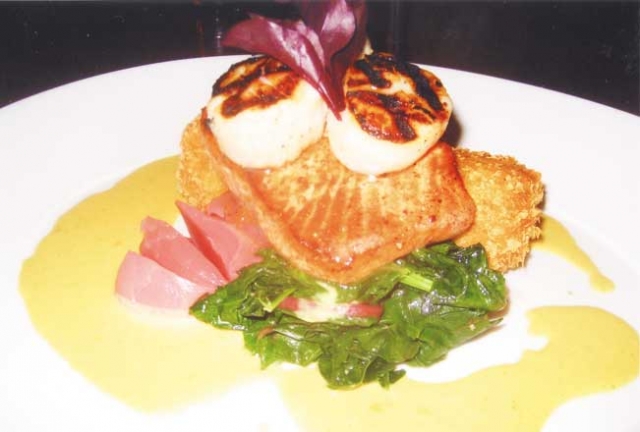 But my very favorite artform isn’t contained in a museum; it resides in the kitchen. Lobster. “We’re a bit fanatical about it here,” declared tour guide John Thomas. No need to twist my arm. I devoured this king of crustaceans three times daily, starting with Lobster Bennie at the super-gracious Radisson Hotel. Then there’s Halifax’s version of fusion food, lobster poutine (French fries swimming in gravy and cheese curds and, here, sweet lobster meat).

Lunch involved a hunt for the premier lobster roll—for Halifax what the cheese steak is to Philly. They’re on every menu, from the harbor’s seafood stands to the Economy Shoe Shop, a café where the décor (Gaudi-meets-Dorothy) is almost as good as the sandwich. They’re found at the airport, they’re on McDonald’s menu, and they’re at their best at the city’s Seaport Market that showcases all things good to eat from Nova Scotia: blueberries and apples to cheese, sausages, and beyond.

But one cannot live by lobster roll alone. Thus, dinners became bacchanals of lobster-topped gnocchi and lobster-crusted haddock at Chives, a locovore’s haven with cozy, cabin-like décor and a menu that extends to a yummy pairing of sea trout and Diver scallop followed by maple crème brulee. Then there’s lobster-topped spaetzle at Le Caveau. The lobster fettucini at Saege, a cosmo, urban bistro that also salutes uber-local fare, including those ultra-sweet Diver scallops. Fid, the leader in locally-sourced comestibles, brings lobster poutine up-market, along with Sober Island oysters, Atlantic swordfish, halibut, tuna, and caramelized scallops (Okay, local beef, too, braised in espresso). Here I widened my mantra to indulge in a superior dish of smoked haddock, followed by panna cotta topped with local blueberries, so intensely sweet they put our puny white cartons to shame.

Finally, the Full Monty. Yes, I ordered a whole lobster with the usual trimmings at McKelvie’s, a former firehouse now saluting seafood, where Tom Selleck is often spotted in his lobster bib. Delish! But even better, my last hurrah at the Five Fisherman, a resto housed in what was once a schoolhouse where Anna—the Anna of “King and I” fame—once presided. I wrestled the critter into submission, along with the warm potato salad at its side. Meals start with a mussel bar, which is a decadent dining hazard, because I lost count after three dozen.

Tempted? Thought so. Check out www.destinationhalifax.com to chart your own adventure.

Founded 250 years ago, Lunenburg (population 2,300 and a UNESCO Heritage Site) calls itself “the prettiest town in Canada”—no argument from me. It’s been a fishing village from the get-go, settled by hardworking Germans who answered Britain’s call for settlers of the “foreign Protestant” persuasion. Its much-photographed houses, all so sparkling they probably repaint them every night, constitute a diorama of architectural styles—a graceful Italianate here, a tidy saltbox there, and Victorian belles with their widows’ walk atop—named for the common, brutal fate of its fishermen. Atop front doors bursts the famous Lunenburg Bump, a half-circle of five windows where the town’s gossips monitored the street.

The Lutheran church boasts a lipstick-red portal, while its Presbyterian counterpart hoists a statue of a cod atop its steeple. The town’s Temperance Hall now serves as a B&B. Its postcard-pretty harbor is home to a Fisheries Museum, but of more vital import is the fact that its second floor hosts The Fish Factory, home of a superior lobster roll and lobster wrap and lobster chowder….well, you get the idea.

On the return loop of this six-hour Gray Line tour, we stop in Mahone Bay, another charmer in the top-town contest, whose tidy clapboard houses now host a dangerous number of alluring shops selling handmade quilts, antiques, jewelry, even pumpkin muffins.

Fully three-quarters of Nova Scotia is carpeted in gorgeous forests, but some of the remaining land is planted in grapevines, fostering a new and growing industry—16 wineries to date. Go North Tours visits three diverse examples: a chance to see and sip the juices of the tide-warmed land.

White wines lead the list, pressed from grapes like l’Acadie, a crisp, fruity wine prefect—perfect!—with seafood. Seyval and Muscat also embellish the white roster—sparkling and ice wines, too—plus Marechal Foch, a light red, and Baco Noir, its fireside cousin. We brake for lunch at Grand Pre with its Cordon Bleu-trained chef. Between wineries, we coat our palates at Fox Hill Cheese House, while watching milk turn into Gouda, Cheddar, feta, and more—including tasty ice creams like Green Apple. We end the day at Tangled Gardens, a labyrinth of herbs and blooms to explore, then shop for jams, liqueurs, and chutney.

Seadog Sauna & Spa is the largest private men’s club east of Quebec City, boasting all the spa fixings. Its website, www.seadogs.ca, also carries a map of the gay community.

Menz/Mollyz, by the same owners, pours its own Menz Pale Ale to pair with karaoke and a funky, eclectic vibe.

Reflections Cabaret scores as the biggest dance club; action heats up after 10 p.m.

Venus Envy invites lesbians to browse its bookstores and check out its fun toys.